The TRX40 AORUS Master is a stunning motherboard that comes in an EATX form factor. The board is really huge and requires a lot of space just to install it. If you're building a Threadripper PC using the TRX40 AORUS Master, make sure your casing has enough room to support this massive beast. 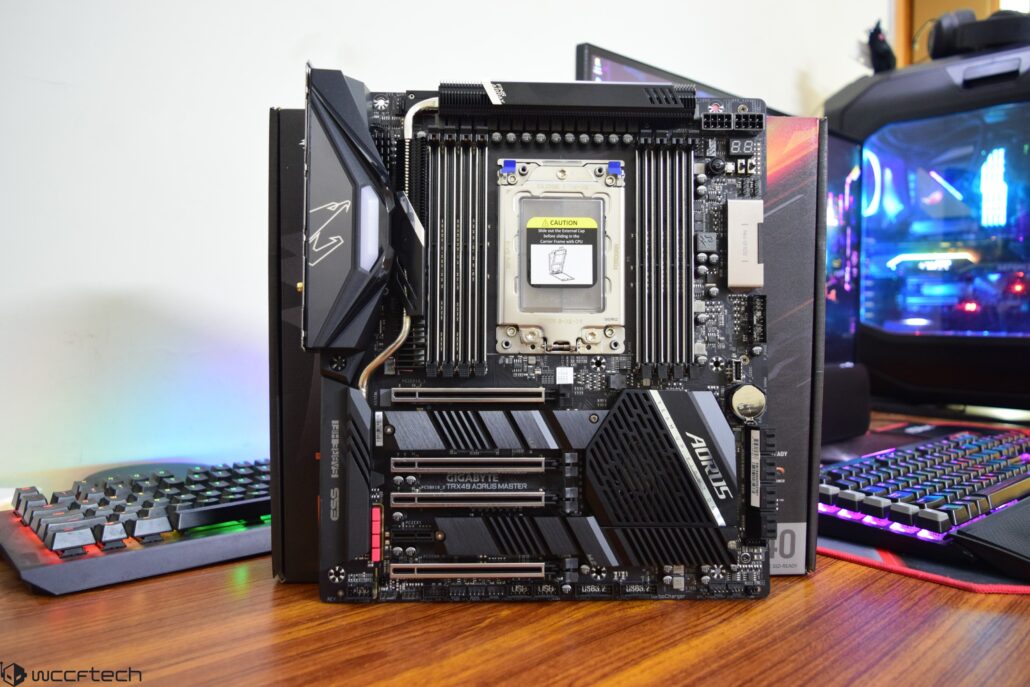 The TRX40 AORUS Master comes with the updated 2019 looks that AORUS has featured on their motherboards. It carries a black and silver color theme with brushed metal surfaces and a very futuristic look which we should expect from AORUS motherboards. 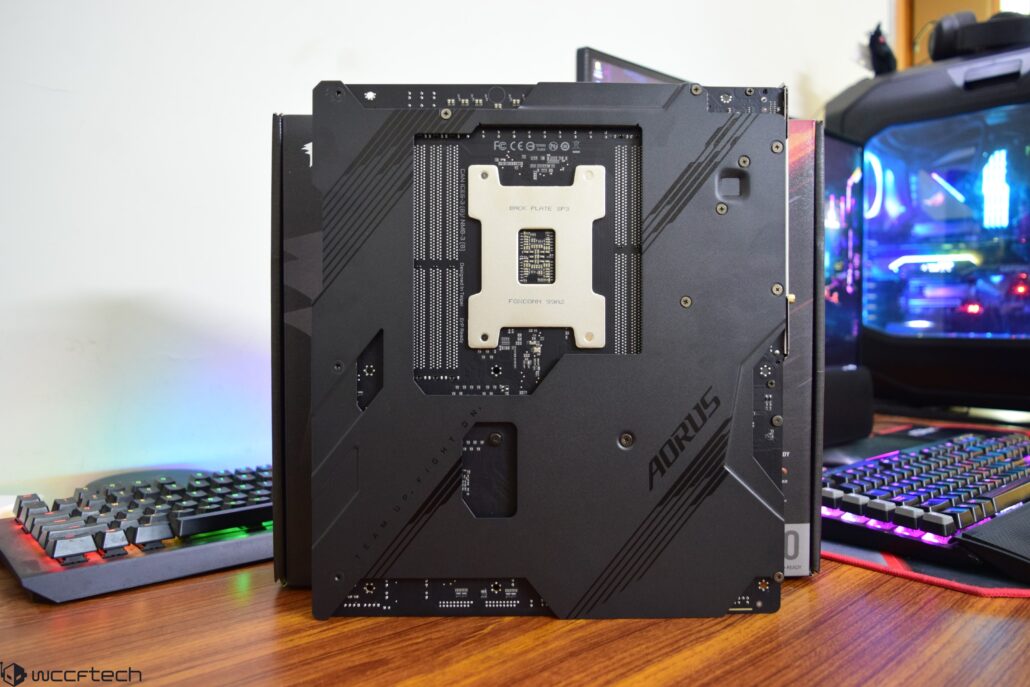 The back of the motherboard carries a nice nanocarbon backplate which has thermal pads placed around the VRM section. The AORUS branding can be seen on the backplate too. There are some clear dual-sided cases available which you can get to really show off your motherboard from both ends if you are into that sort of a thing. 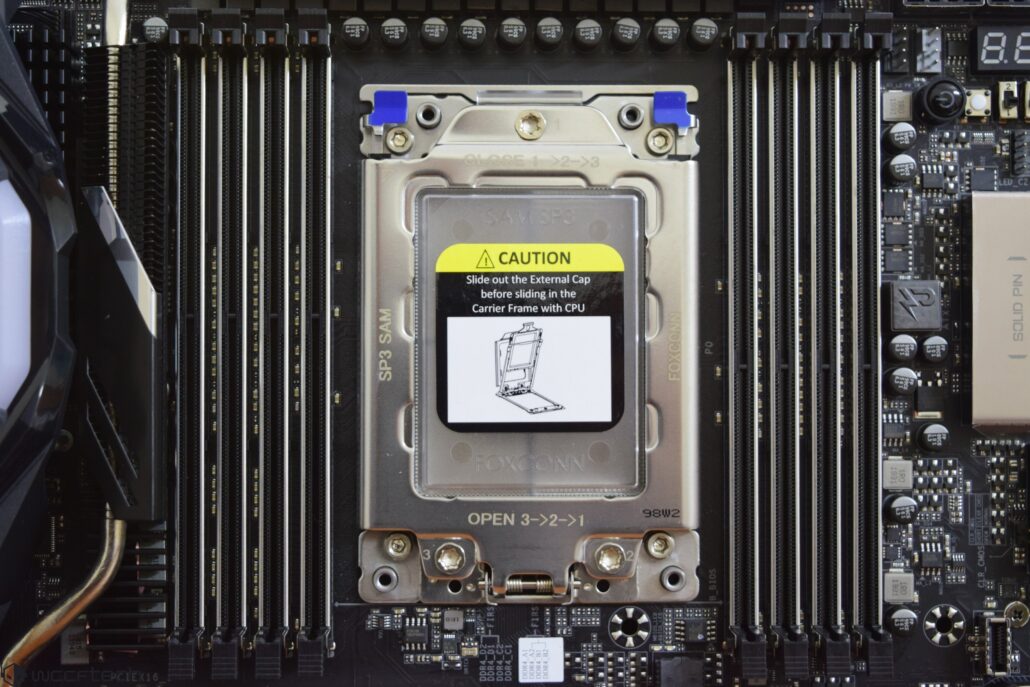 The board uses the sTRX4 socket to support 3rd Gen AMD Ryzen Threadripper CPUs. The socket has a plastic cover that slides in and out with ease. The AMD Ryzen Threadripper processors also slide in the socket with ease after removal of the protective cover. All TRX40 motherboards are shipped with this cover since we are talking about 4094 pins and one damaged pin can cause permanent damage to the board. 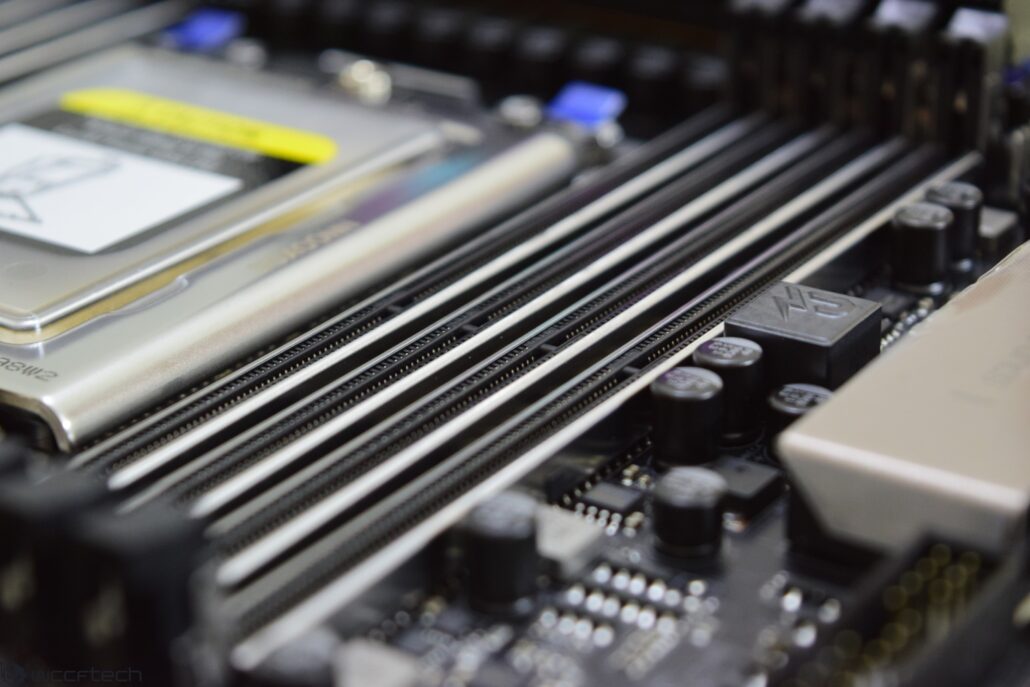 Right next to the socket are eight DDR4 DIMM slots which can support up to 256 GB (dual channel) memory. These slots are rated to support DDR4 DIMMs with frequencies all the way up to 4400 MHz (OC+) which is a huge increase from the AORUS X399 series which only supported up to 3600 MHz (OC+) DIMMs. 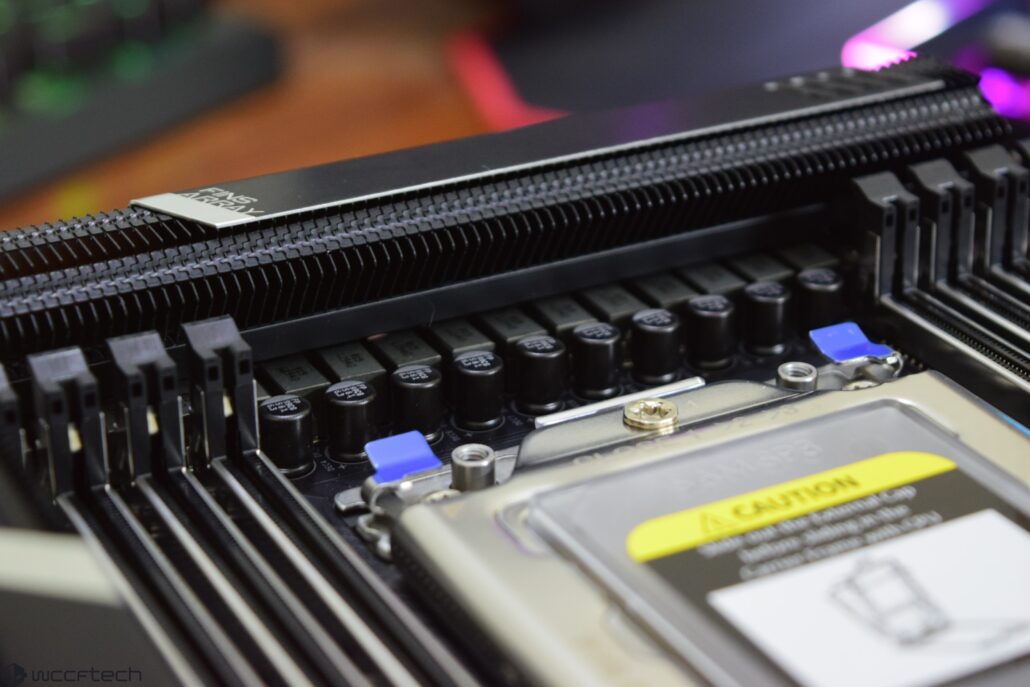 The motherboard packs a 16 phase design which runs off an Infineon XDPE132G5C 16-phase PWM controller and 16 Infineon TDA21472 70A power stages along with three additional phases for the memory and PCH. The board also uses a 2x copper PCB & uses higher quality components which emphasize quality over quantity, offering higher stability. 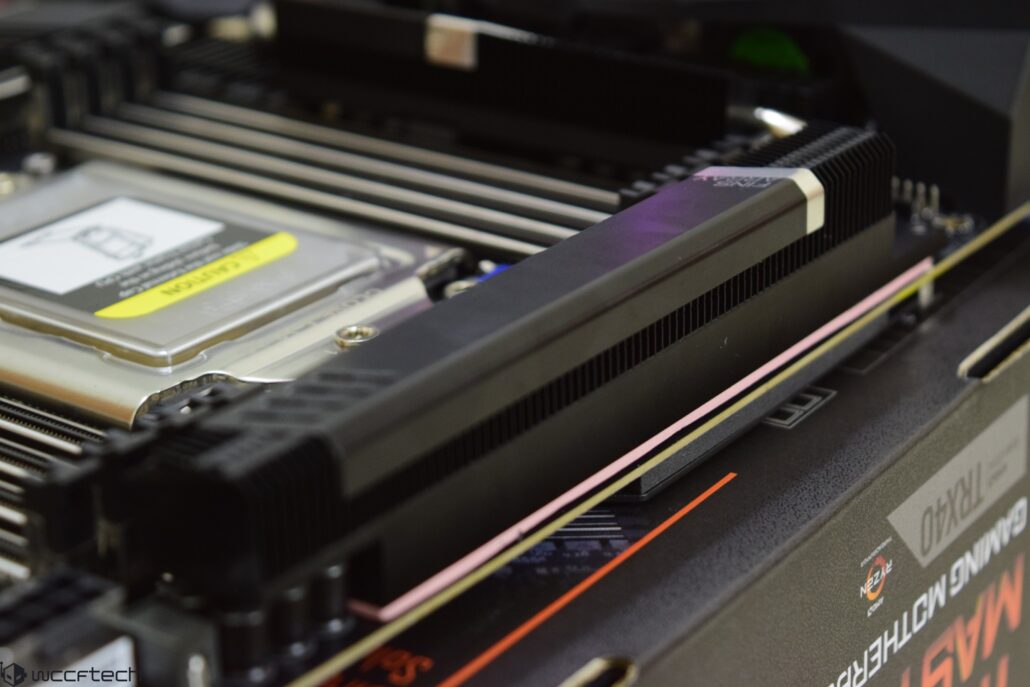 Both the top VRM and lower audio heatsinks channel heat to the middle heatsink which has a wider aluminum finned heatsink block under the I/O cover. The fin array heatsink has been in use by AORUS since their X470 series of motherboards back in 2018. The design offers more cooling and better contact with the underlying components, effectively dissipating heat. The CPU side of heatsinks features a metallic color with silver and black color scheme which looks great along with the all-black aluminum fins underneath them. 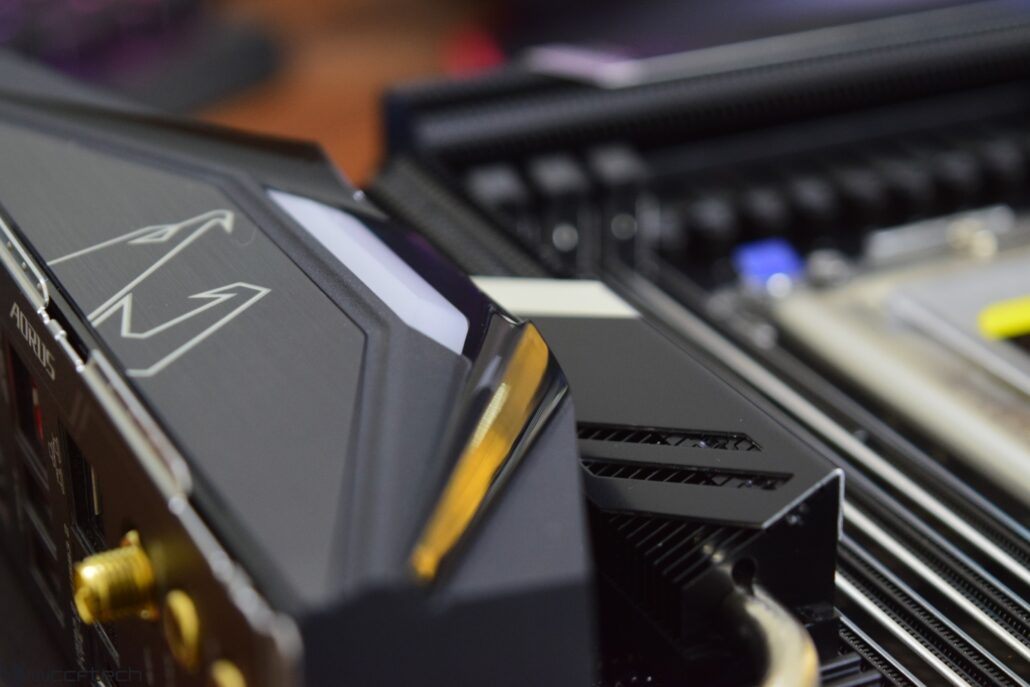 The top I/O cover has an AORUS Eagle logo which is a nice touch to the AMD setup. The shield covers the entire I/O panel and looks great on this motherboard. There's also RGB on the I/O shield which surprisingly is the only RGB you get on this motherboard which, to be honest, is not necessarily a bad thing considering the board is just as good as to look as it is. 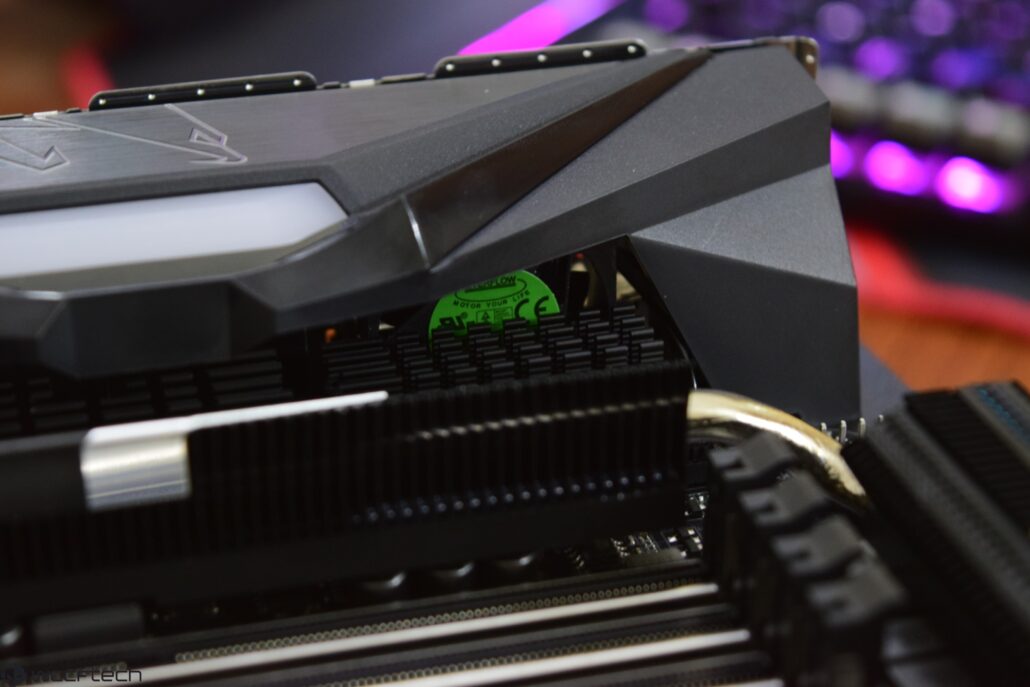 Right under the I/O cover is a small PWM fan that blows air towards aluminum fin heatsink block which I was just talking about. This ensures that the heatsinks stay cool and the heat doesn't build up on the motherboard. 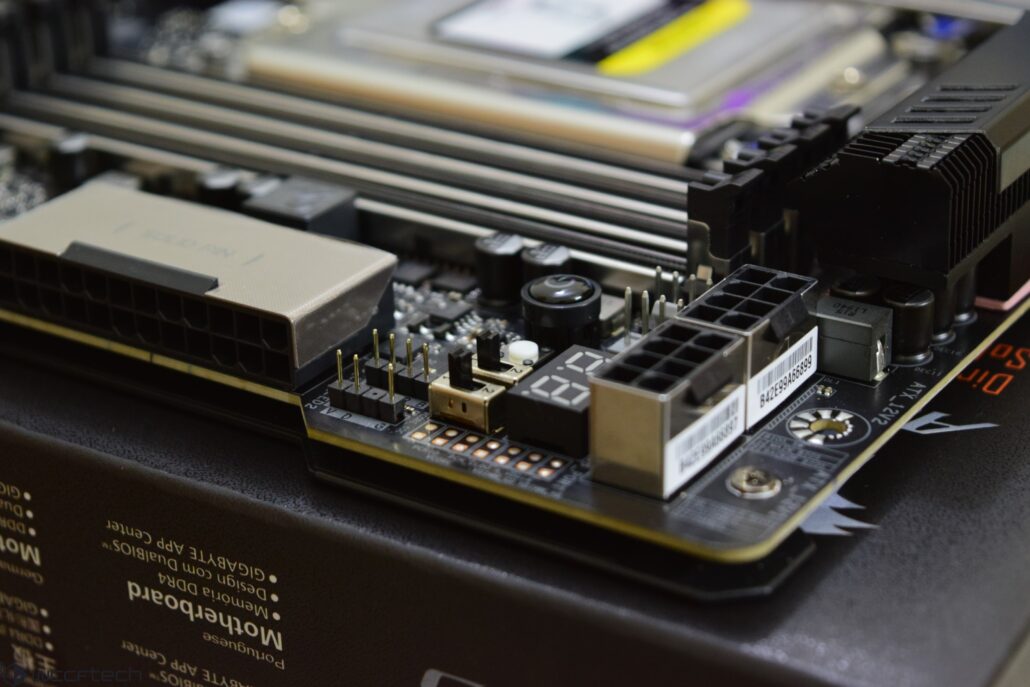 The CPU is supplied with power through two 8 pin connectors. This will feed the CPU with up to 300W of power. AMD currently ships Ryzen Threadripper CPUs with TDPs of 280W. 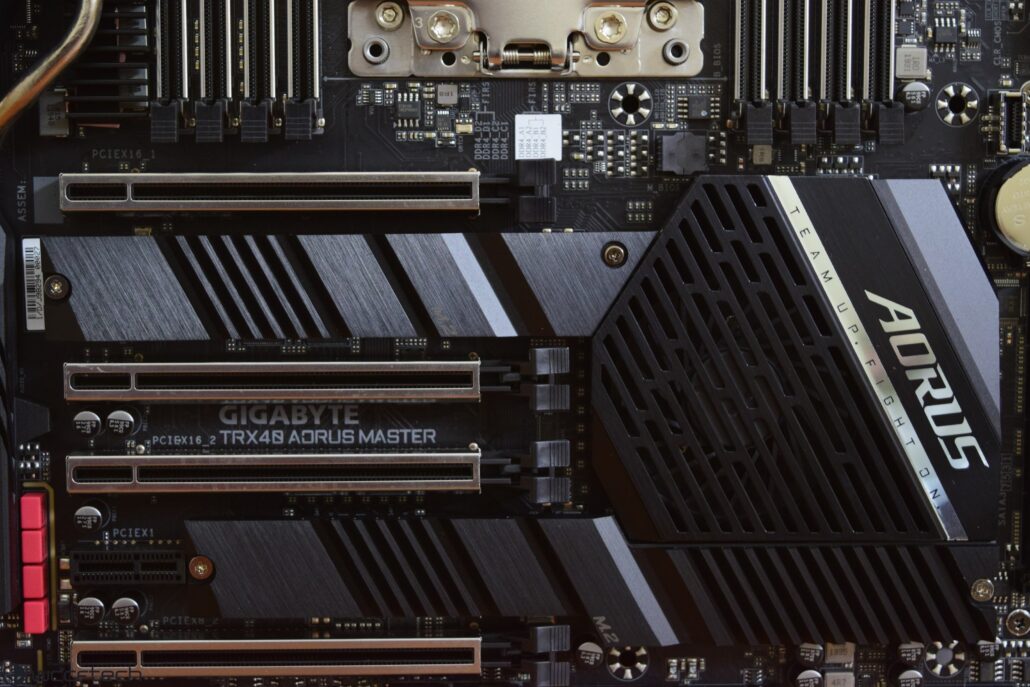 Expansion slots include four PCI Express 4.0 x16 (x16/x16/x16 electrical), a single PCI Express 4.0 x1 and three M.2 slots. The board can support 4-way multi-GPU (CrossFireX / SLI). The M.2 slots are rated to support NVMe PCIe Gen3 x4 SSD. Following is the PCIe x16 slot configuration on the board itself: 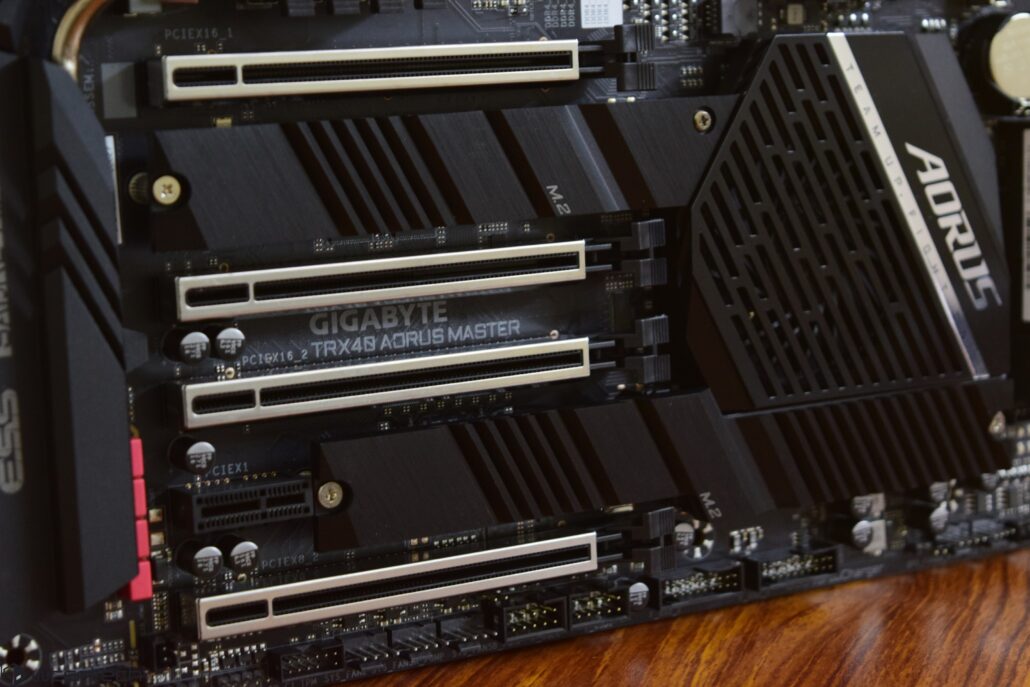 The M.2 slots are hidden beneath M.2 heatsinks that come with thermal pads under them to get better contact with the aluminum heatsinks. The top M.2 slot can support SSDs up to 110mm and the M.2 slots at the bottom which feature a single extended heatsink feature support for up to 80mm SSDs. The storage configuration for the M.2 slots is listed below:

Integrated in the CPU:

Integrated in the Chipset:

AORUS makes use of their Ultra Durable PCIe Armor on the TRX40 series motherboards.  These not only make the slots more durable and solid but also increase signal stability since AORUS has featured more anchor points underneath the slots. One more thing, the single PCIe 4.0 x1 slot doesn't feature any of the said features. 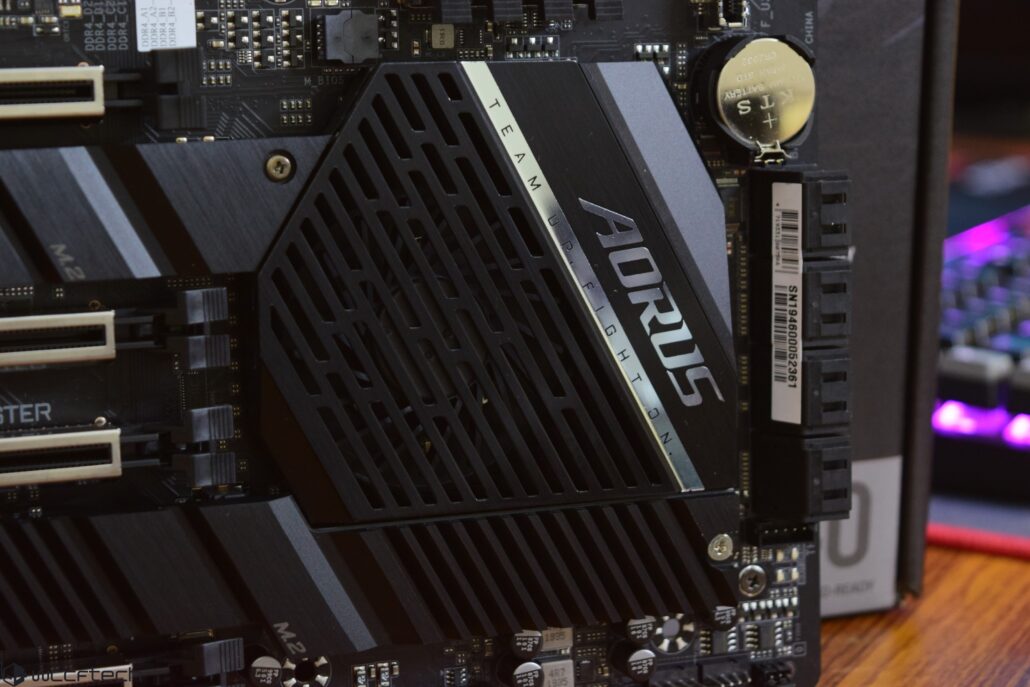 The TRX40 PCH is housed beneath a large heatsink with the AORUS logo & a text which says "Team Up. Fight On".

The TRX40 PCH heatsink has a nice cut-out design which also adds function since the large fan underneath it has to blow air outwards. The PCH fan can be controlled through the BIOS or the bundled Gigabyte software so you can set its speed to various modes or disable it for quieter function. 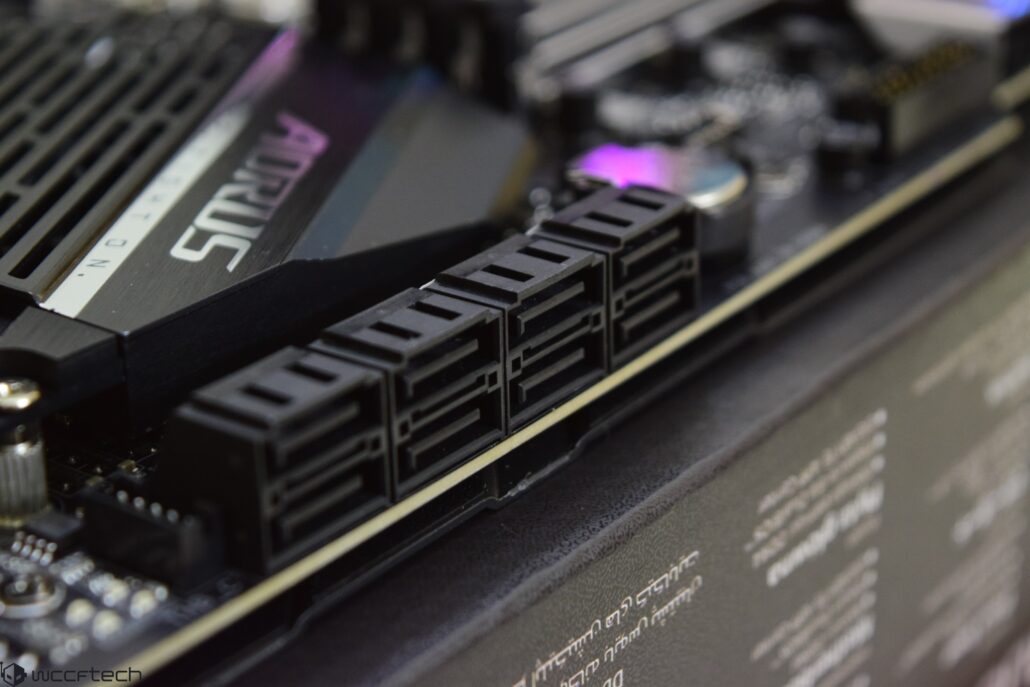 Storage options include eight SATA III ports rated to operate at 6 Gb/s. There are 8 SATA III ports next to the PCH heatsink that can support a total of 6 different storage devices at the same time. 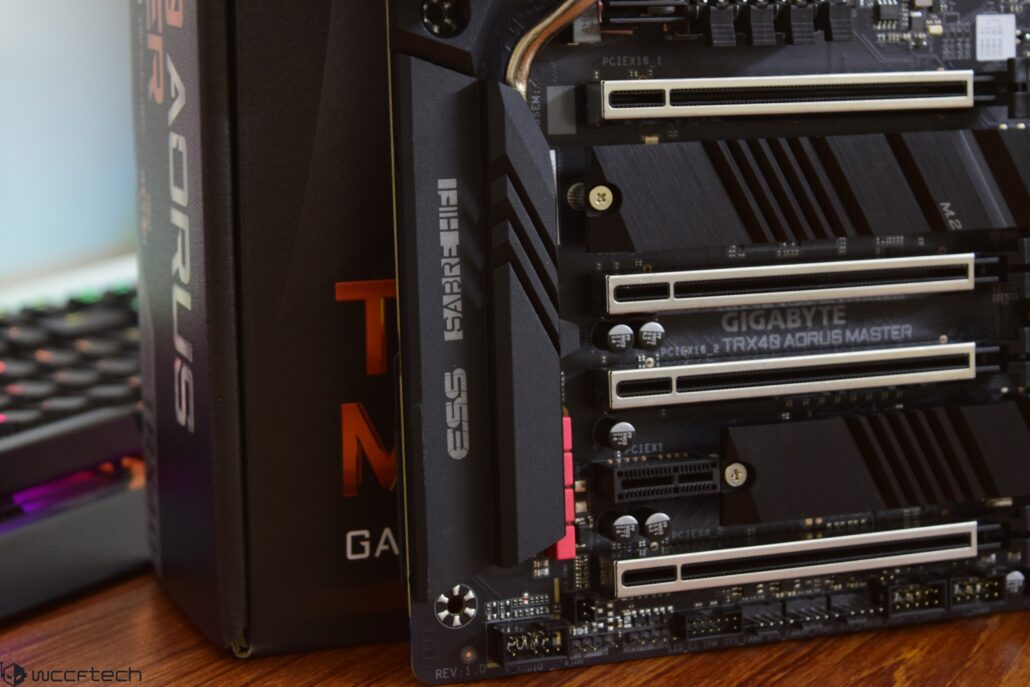 The motherboard offers 4 USB 3.2 Gen 1 front panel ports through internal headers and a single USB 3.2 Gen 2 header which can be used to connect the front panel. There are an ample amount of fans connectors including those for water pumps on liquid AIO coolers. A list of connectors available internally on the motherboard include: 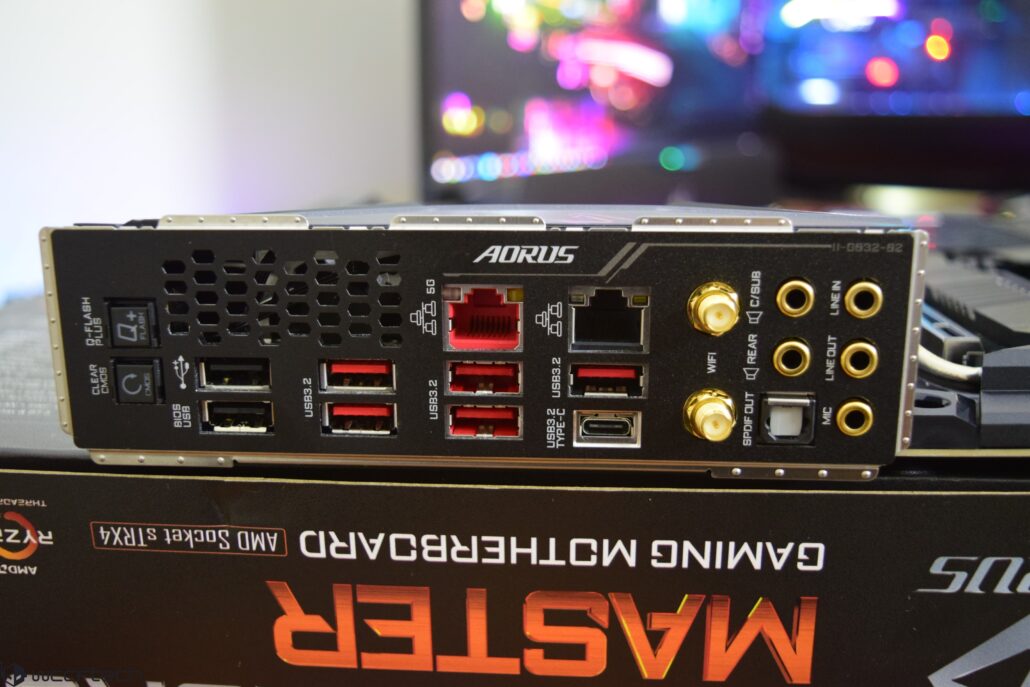 The motherboard features a pre-mounted I/O bracket which is the industry standard nowadays. It features a nice matte black color scheme along with a AORUS logo. In terms of connectivity, TRX40 AORUS Master rocks a WiFi 6-AX200 with Bluetooth 5.0, WiFi 802.11a/b/g/n/ac/ax, supporting 2.4/5 GHz dual band. There's also a 5 Gb Ethernet (Aquantia) LAN chip on the board along with a 1 GbE Intel LAN chip. I/O on the board include: 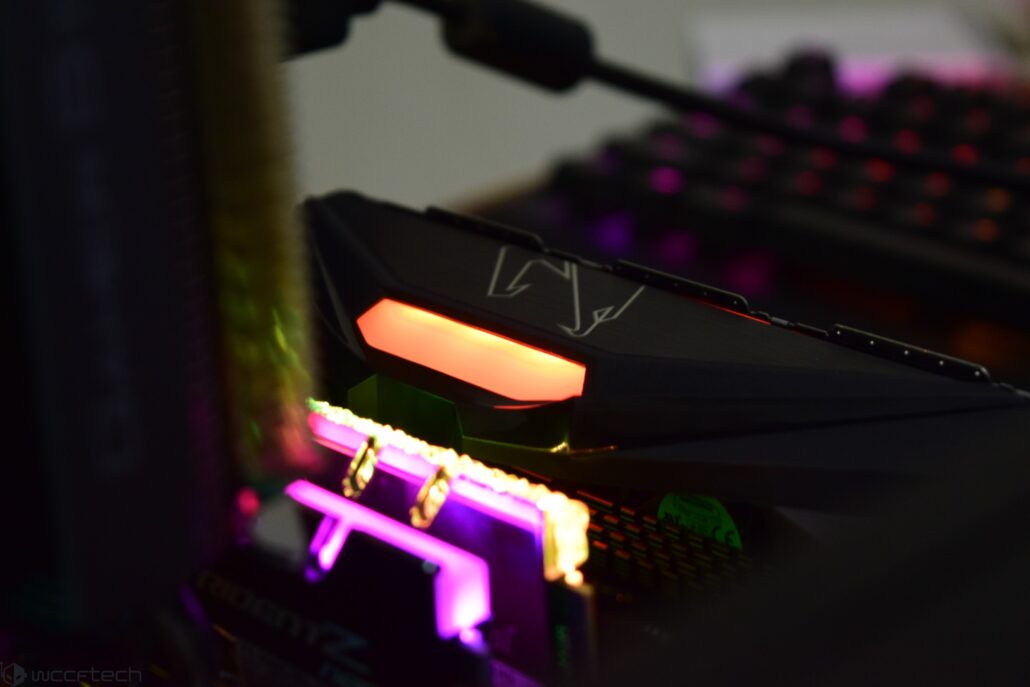