It’s very easy to complain on the internet about things you don't like. Some people start petitions or run polls to see how many like-minded individuals there are who support their cause, and there are others like Chris King, a developer at Batterystaple Games, who take it upon themselves to go the extra mile. Instead of hoping and wishing Capcom make a new Mega Man game that lives up to high expectations, Chris decided to make his own game. Revealed back in May 2014, 20XX (known as Echoes of Eridu at the time) had barely managed to scrape past the Kickstarter goal of $20,000. In the four years since the Kickstarter campaign, 20XX has spent years on Steam Early Access receiving bi-weekly throughout the entire early access period. Almost a year after launching the 1.0 version on PC, Batterystaple Games are finally bringing the game to consoles.

Inspired by Mega Man X, 20XX allows you to pick from two characters: Nina, equipped with a power blaster and Ace, equipped with an energy sword. These two characters also happen to play very much like Mega Man X and Zero. Unlike the Mega Man games, 20XX adds roguelike elements to give players a different experience every time they play. A run of 20XX consists of ten levels, each containing their own boss. Each boss has a weakness to another boss’ weapon, however, unlike the Megaman series after beating a boss you can pick your reward: the boss weapon, nuts (the in-game currency) and a random upgrade.

Each playthrough of 20XX varies right from the beginning with the level selection. There are eight levels at first, with the final two levels being restricted until you clear all of these stages. Every level contains a shop to spend your nuts on, though what you can purchase in these shops vary from stage to stage. You’ll find a number augments to power up your character including health & damage upgrades, a magnet that attracts dropped items when charging your weapon and more. It can be awkward when you are playing and every shop manages to never stock the one item you need, but that’s the way of roguelikes. There are also hidden chests across all levels that can contain nuts, health, augments and even weapons or armor if you are lucky. Another way to obtain these chests is to complete the Glory Zones. Each of these zones has a different requirement, for example: kill all the enemies within a time limit, disable every trap on the stage and reach the end of the level without taking damage. 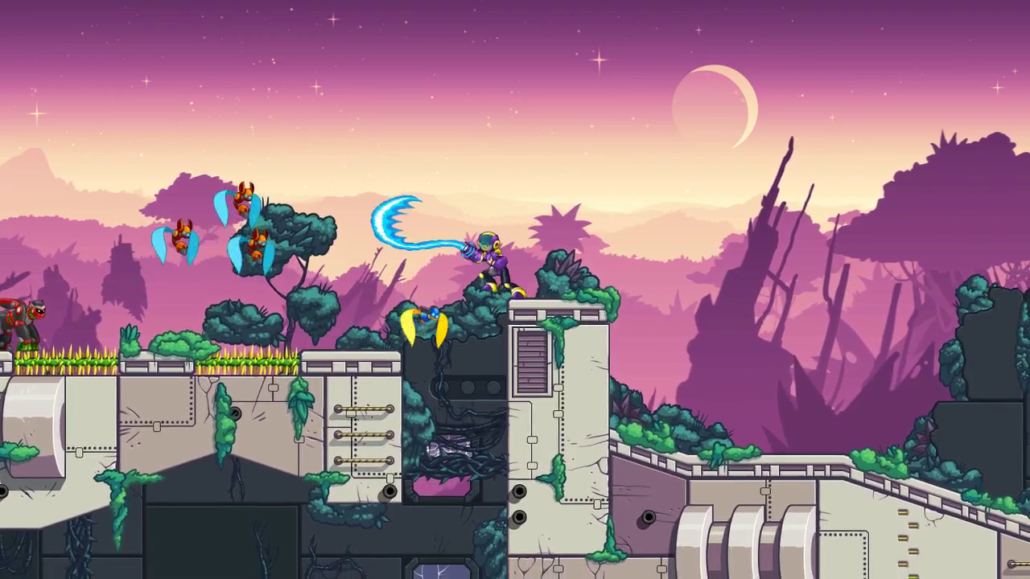 Despite being a roguelike (well, I suppose it’s technically a ‘roguelite’), the levels in 20XX feel as though they’ve been handcrafted, and that’s because they have been. During my first few playthroughs of the game, I was shocked to see the platforming was holding up as well as it does considering 20XX is supposed to be a randomized game. In order to make sure the level design remains consistent, the developers created individual chunks of each level and randomized the order they appear in. After a few hours, players will start to recognize what these chunks look like, though this knowledge won’t make the game any easier.

A true roguelike forces the player to start all over again after they die. 20XX allows you to purchase permanent and one-time-only upgrades before starting a run, including upgrades to your starting health and energy. These permanent upgrades do not come cheap, however, as you’ll be forced to save a large number of Soul Chips before buying anything substantial. To make matters worse, you cannot save your Soul Chips, so you’ll have to spend them wisely when you are at the main hub.

I found the difficulty spike to be insane after the eighth boss, almost as if to say this is where the real challenge begins. I don’t find this to be so much of a problem now that I’ve played the game for as long as I have, but reaching these late stages after thirty minutes only to be crushed so close to the end is such a demoralizing experience. The ‘just one more try’ appeal started to wear off for me the further I got in the game. It took me some time to understand what load-outs I should go after when approaching the final stages, it’s just frustrating having to spend a lot of time learning this lesson. 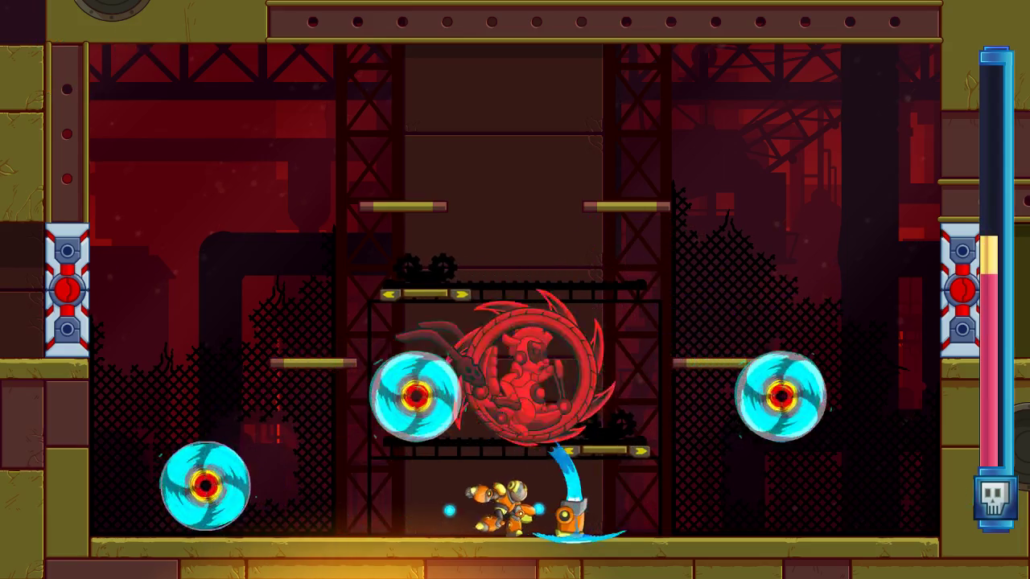 So, you’ve managed to finish the game on Normal, hell, maybe you even completed the game on Hard. What’s next? There are the Skulls that allow you to modify the difficulty to make the game as awkward as you’d like. Miss the old Megaman days where touching things like lava and spikes killed you in one hit? Equip the ‘Rock’ skull and be super cautious! Why not take the meme to the next level with the ‘Final Destination’ skull which removes all items from the game? (Get it?)

I’m not a fan of the art direction for this game, to the point where if I wasn’t reviewing this game then there’s a big chance I wouldn’t have even known about its existence. I know it’s stupid to judge a game by its cover but both the box art and the game itself look like something you’d find on an old Flash website. What I’m trying to say is, maybe don’t be stupid like me, okay? The game might not look too hot, but if you like the sound of it then you should seriously consider picking it up.

It would come as a surprise if 20XX ran poorly on the Switch, which thankfully it does not. 20XX runs at a rock solid 60FPS, and while I have not been able to confirm the resolution I have to imagine it’s around 720p both docked and undocked. The battery in my Switch died much faster than I would expect for a game like this. I can just about get in two to three runs before the battery dies (roughly over two hours of gameplay). I was hoping a game like this would use less power, but I suppose the smooth performance has to come at a cost. 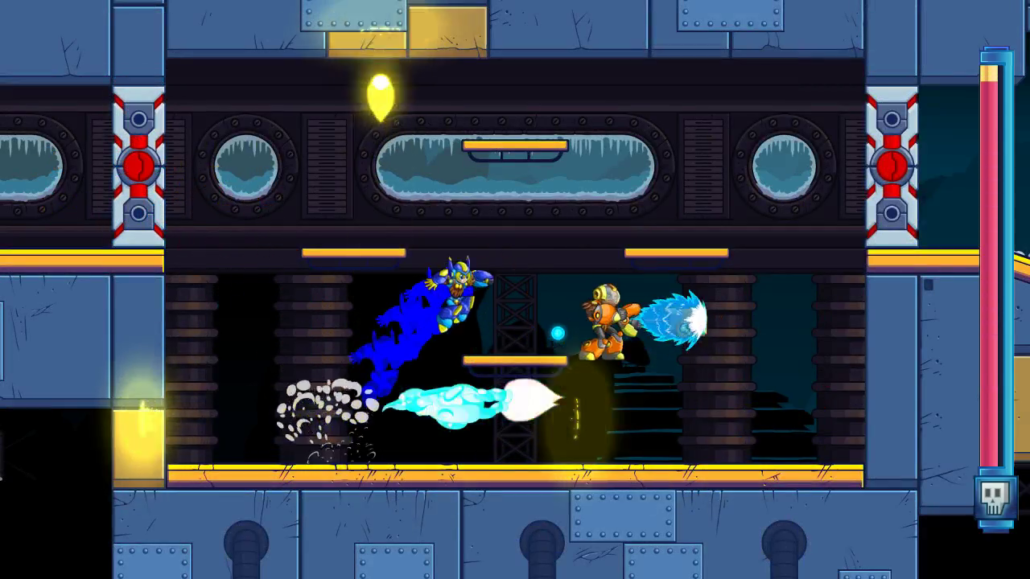 20XX has support for both local and online co-operative play. You can play with two people using the same console, though you’ll both have to share the same screen. If you happen to have two Nintendo Switches, you can play together while enjoying the luxury of having your own screen, just as you would do if you played online. Speaking of the Switch, 20XX’s loading times are longer than I would’ve liked, but once a level has loaded there aren’t any awkward pauses until you pick the next stage. I imagine these loading times are a lot faster on any of the other consoles given that the Switch is the weakest of all the platforms 20XX is on.

At the time this review was published, there was no option to remap any of the controls like you can do on the PC version of the game. One of the game’s developers has confirmed on an AMA conducted on Reddit that a patch is in the works to put this option into the game. This is a huge deal as playing 20XX in handheld mode really began to take a toll on my hands, especially in the late game when you need to use all three of your special powers.

Part of the reason why 20XX exists is Capcom’s negligence of the Mega Man series. Batterystaple Games has successfully taken the Mega Man X formula one step further by adding in roguelike mechanics, essentially giving the game infinite replay value. Don’t worry about mastering 20XX in a week and having nothing else to do afterward, there are plenty of modes to keep the best players happy. In addition to this, the developers have also confirmed that all DLC for 20XX will be free on consoles going forward. When you consider the reasonable price (£13) and the continued support for the game, it seems like an easy decision for platforming fans.