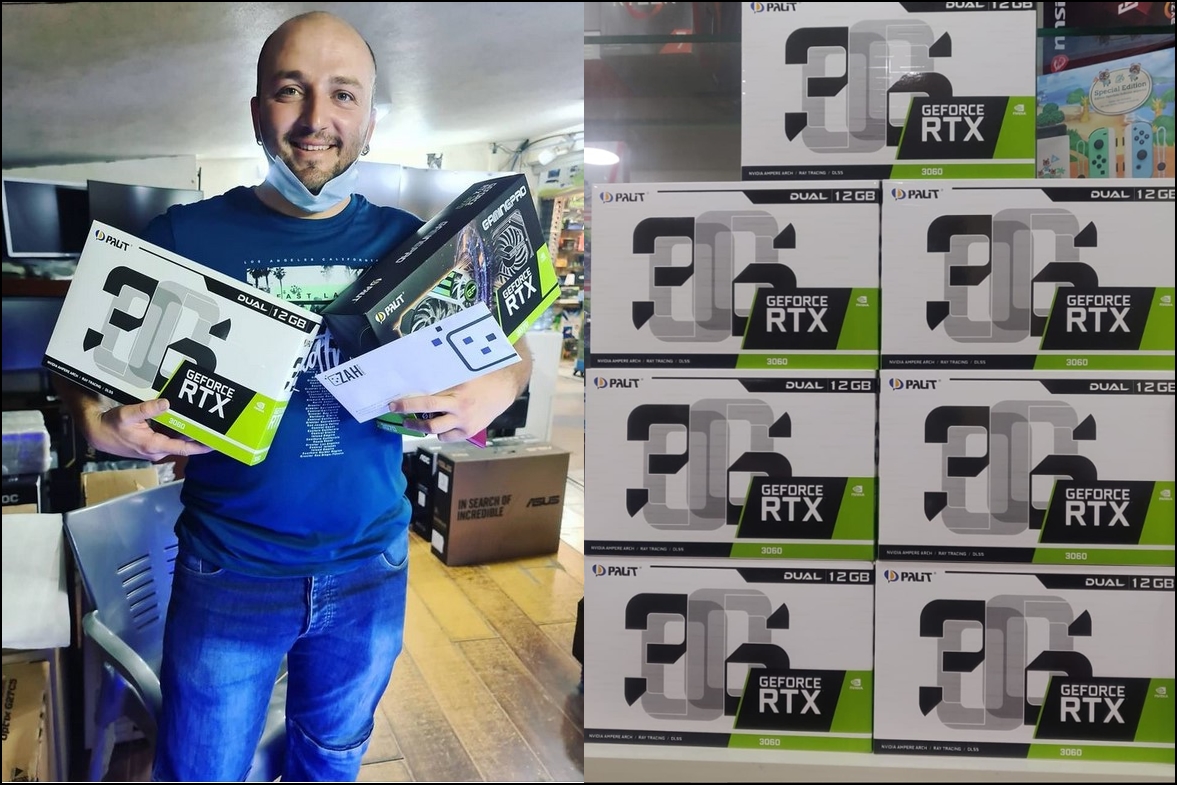 NVIDIA's upcoming RTX 3060 was an excellent value proposition. With 3584 CUDA cores, its performance was firmly positioned between the RTX 2080 and RTX 2080 Ti, and the $329 MSRP made it one of the best bang for buck cards around. Unfortunately for gamers, GPUs in 2021 remains a pipedream for most. Some European retailers have already marked the card upwards of $600 USD (EUR 499) which is almost two times the premium over NVIDIA's MSRP and 50% over official European MSRP.

The price hike was spotted by Videocardz user The Determinator and posted by WhyCry. While NVIDIA tries to make vendors stick to its MSRP by allocating cards to vendors that will fulfill preorders at MSRP, retailers have adopted the tactic of canceling said preorders and forcing customers to reorder at inflated prices. You can argue here that NVIDIA can't really do anything else in this situation while staying under the rules of a free market. While it can limit or restrict future supply to these vendors "at will", they can't really be seen enforcing pricing conditions on any retailer (which would be against the law).

Some retailers in Europe have even hiked prices of the RTX 3060 up to a massive $835 USD (or $689 EUR) which is absolutely insane considering it is almost three times the original MSRP at this point. In the before and after comparison screenshots, you can see that the initial (already inflated) prices of the RTX 3060 versus the new exorbitant pricing on PCDIGA - an European store:

We have heard that the RTX 3060 will have the most allocation out of all of NVIDIA's 3000 series lineup so far but considering the booming cryptocurrency (and mining) market and the insane demand for GPUs, it is hard to see how the free market will not keep jacking up the prices of this incredibly valuable silicon. The sad fact of 2021 is that gamers are just not as lucrative a customer to retailers as miners are - and as long as there is demand at these exorbitant rates, retailers will continue to mark these up.

We have already seen Pakistani retailers sell the RTX 3060 (which hasn't even launched yet!) for $750 USD and it is hard to see how the situation will improve any time soon given the current supply-constrained environment. The one ray of hope for gamers appears to be in prebuilt, where you can regularly find premiums as low as 10% - which is almost nothing in 2021. Buying a prebuilts might be the only way gamers get their hands on some GPUs this year considering big OEMs like HP, Dell and Alienware have the resources (and will power) to enforce reasonable MSRPs.

Brick and mortar stores might also make a comeback as scalping through bots is impossible at scale in the real world and you can actually pick up a decently specced pre-built at best buy. At the rate the prices are increasing, it might actually be cheaper to just buy pre builts and sell the components you do not want instead of purchasing a GPU directly.