NVIDIA has got in some deep mess with their GeForce GTX Titan Z as the launch of the card was planned for April 2014 yet the card hasn't been launched in market as of yet. If that's not enough, a review of the card leaked just a few days ago which showed lower performance than its much lower priced competitor, the Radeon R9 295X2. 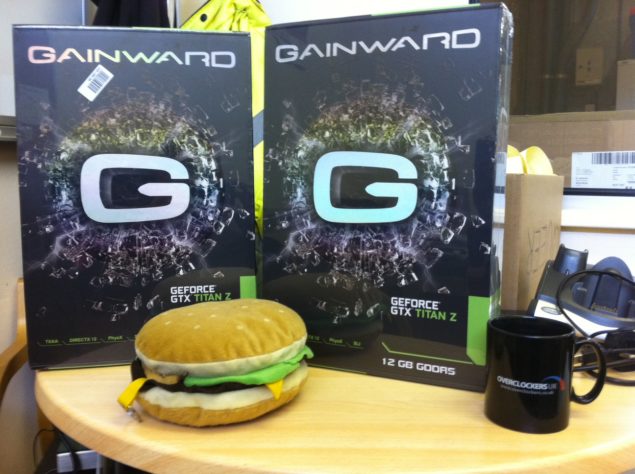 Now you must be wondering what went wrong with the launch? Performance and design aside, it has been said on several occasions that NVIDIA delayed the card due to unfinished drivers since they want their card to be out with proper support for games and applications. The development of software for the NVIDIA GeForce GTX Titan Z has led the card to face several delays and it still remains unknown when does NVIDIA plan to launch the card officially.

While there has been some misinformation spread on several forums and communities that the card has been cancelled due to poor performance, that's not true at all. The card is ready for deployment and several retailers have access to the GeForce GTX Titan Z in their warehouses. Overclockers.co.uk reports that they have already got retail units of the card ready for launch and are awaiting NVIDIA's greenlight to officially start selling these cards. Gibbo over at the OCUK Forums has the following to say:

To clear up the nonsense in here, the cards we have in stock are the cards which shall be sold. Just waiting for greenlight from NVIDIA. The only changes to be implemented are software based, not hardware.

This confirms that the card is ready and had reached retailers a few weeks back as indicated by GDM.OR.JP who were the first to report the drivers being the main reason behind the GeForce GTX Titan Z delay. We will keep you updated when the card is available for official launch.

The GeForce GTX Titan Z is manufactured with two GK110-350-B1 chips under its hood that pack 7.1 billion transistors each. The GeForce GTX Titan Z replaces the GeForce GTX 690 boasting dual-GK110 cores compared to dual-GK104 cores on its predecessor. The GeForce GTX Titan Z will feature two GK110 cores with 5760 Cuda Cores, 448 TMUs and 96 ROPs. The card features a 384-bit x 2 bus which will run across a massive 12 GB VRAM. This is an impressive feature giving developers and games an unprecedented amount of VRAM for use. The memory is clocked at 7 GHz effective clock speed. The core clock speeds are maintained at 705 MHz base and 876 MHz boost clock and the card features a maximum single precision performance of 8.1 TFlops and 2.3 TFlops of double precision. Performance of the card can be seen in the leaked review.