Welcome to The Village, well, Resident Evil Village, and yes this is another Ray Tracing article but hopefully you’ll enjoy the change to the way I cover this one and we can move forward like this. Hold towards the end for some of the performance information I know you’re all eager to see, but I want to spend more time talking about the tech used in the game and the impact it makes on the visuals so it’s easier to see how RT can enhance a game and go beyond what ULTRA settings can do.

Before we get too into the comparisons, I want to cover some of the key features that this AMD partnered title brings to the table.

Ray tracing in Resident Evil Village is available on all graphics cards that take advantage of hardware-based ray tracing, so RX 6000 Series and NVIDIA’s RTX 20 and 30 Series (the options weren’t available on my GTX 1080 at the time of preparing this video but that might change after with driver updates). Ray Tracing in RE Village has two primary options, Global Illumination, and Reflection as well as Light Reflection. With the release of RE2 and RE3 Remake, I was almost begging for some type of RT Reflections because the otherwise stunning engine was marred by the shortcomings of SSR in many of the shiny surfaced areas of the game, so I’m happy to see this here but soon, you’ll see where the RTGI might actually be the star of the show.

With no further ado, let’s get to a few examples of areas in the game that are greatly enhanced by taking advantage of these RT functions. Kicking things off in the Hall of Four, a fairly early part of the game just inside the castle, this room does a good job combining all the features of the RT Global illumination as well as all types of reflections really come together. The corners of the room as well as the ceiling, the archway to the right, and the statues are all well lit from the light sources as well as colored correctly. The reflections on the floor are accurate to the material they’re reflecting from and not just mirror-like not to mention the lights from the candles on the floor next to the well-lit door reflecting light onto the marble surface. 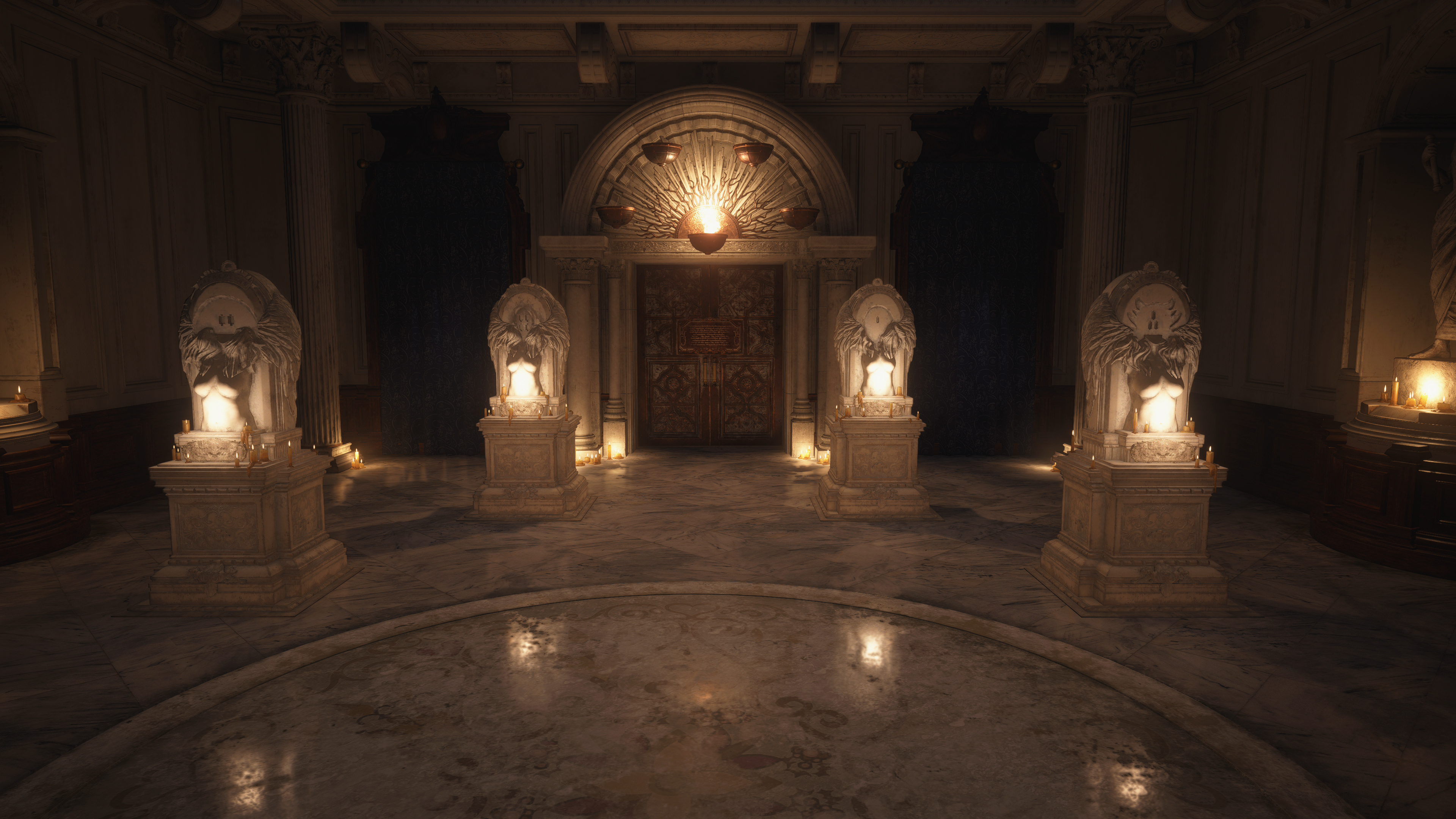 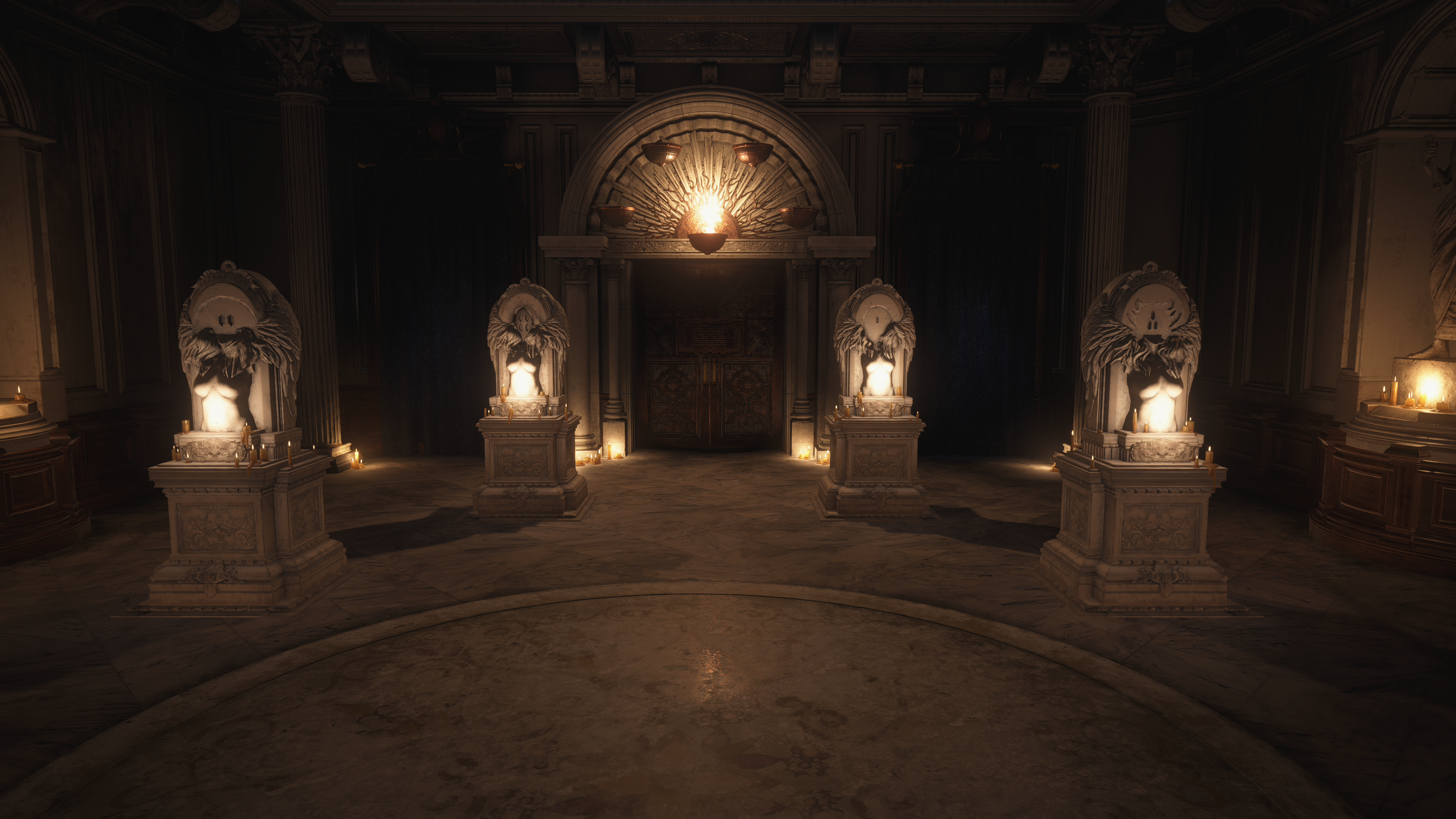 Want to see how much impact this really makes, simply turn off the RT effects and suddenly the room goes, well to be honest it still looks good but nowhere near as lifelike and vibrant as it was, the corners of the room are almost too dark, the marble floor appears drab as can be and the small reflections coming from the candles are simply gone, now let’s move on to another scene.

This is a scene below “The Tasting Room” where we can get another good look at the way RTGI can impact the overall look of an environment but more importantly, what it can do with RT reflections, the main focal point here is going to be the area under the gun because when RT Reflections are in use the scene is able to pass information to the reflective surface from the room so that everything reflects ‘naturally’ but when we disable RT we lose much more than the accurate lighting, now look at how the reflections below the gun where it’s obstructing the screen space information and it just looks bad, and for me, this can get a bit distracting in some of the more ‘wet’ areas of the game. 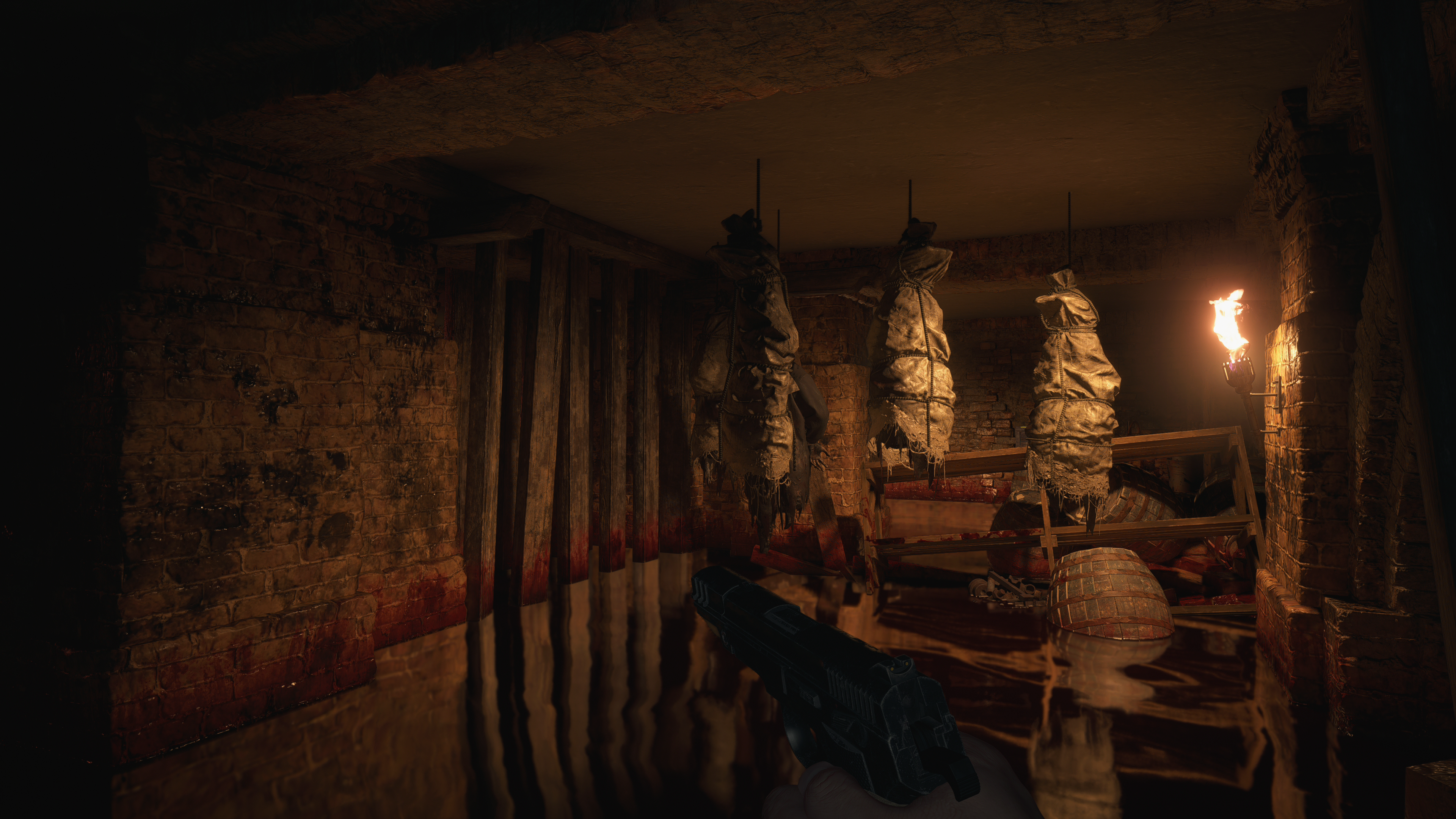 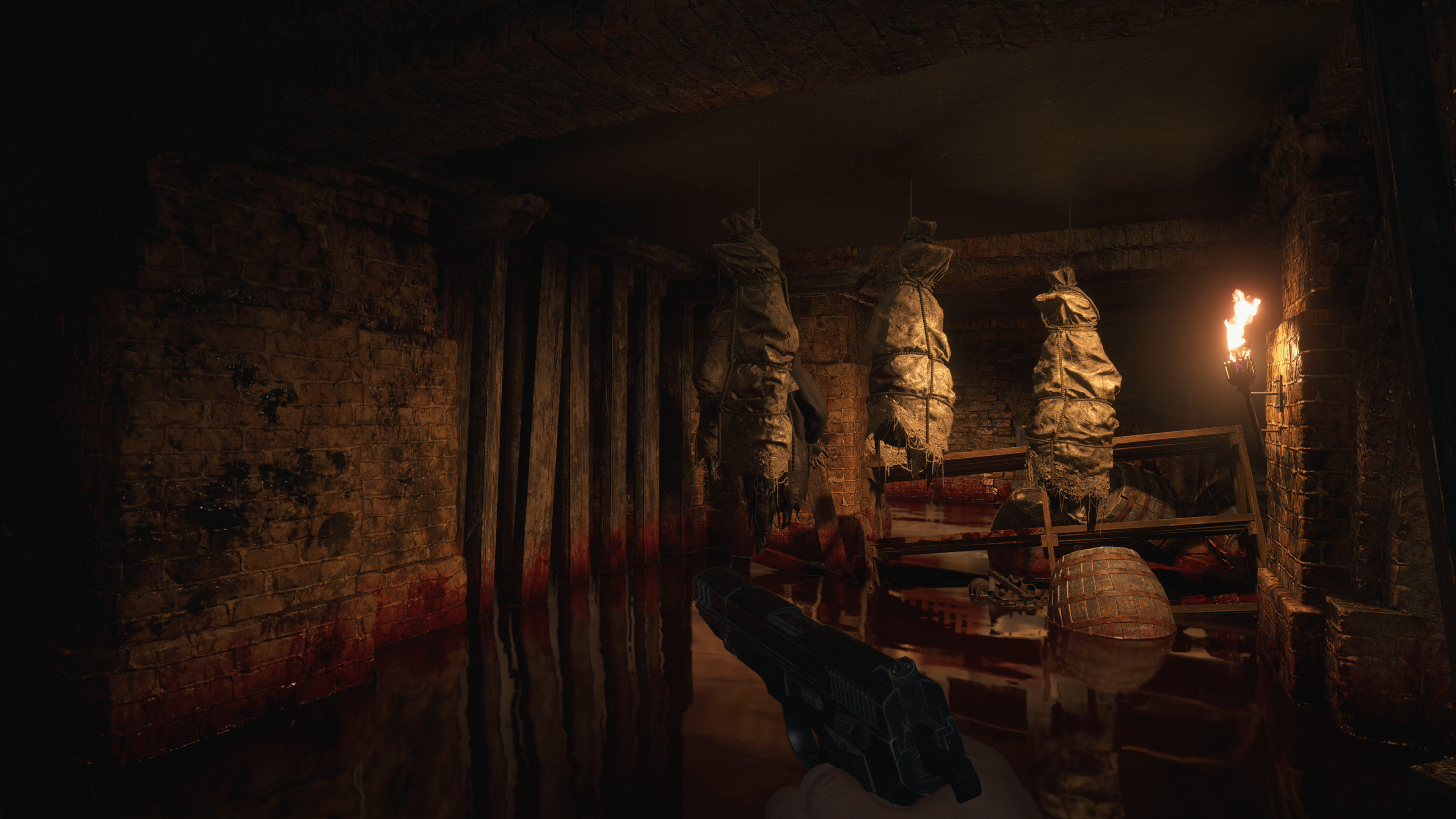 Let’s move things outside for the last quick look at how things go with RT enabled. Outside is very important because you’ll be spending a very large portion of the game out there and quite frankly, it’s not nearly as impactful as in the indoor scenes, but when you get to looking at them next to each other you notice just how much impact the RTGI has even here. The RT enabled scene has a variety of colors represented and there is a clear definition from different parts of the scene, the water looks more natural with its reflections on the ripples. Disable RT and the scene goes flat. This is reminiscent of how Metro Exodus looked when it first came out. Disabling RT in this scene leaves the whole thing feeling quite bland and muted with all the colors almost running together. 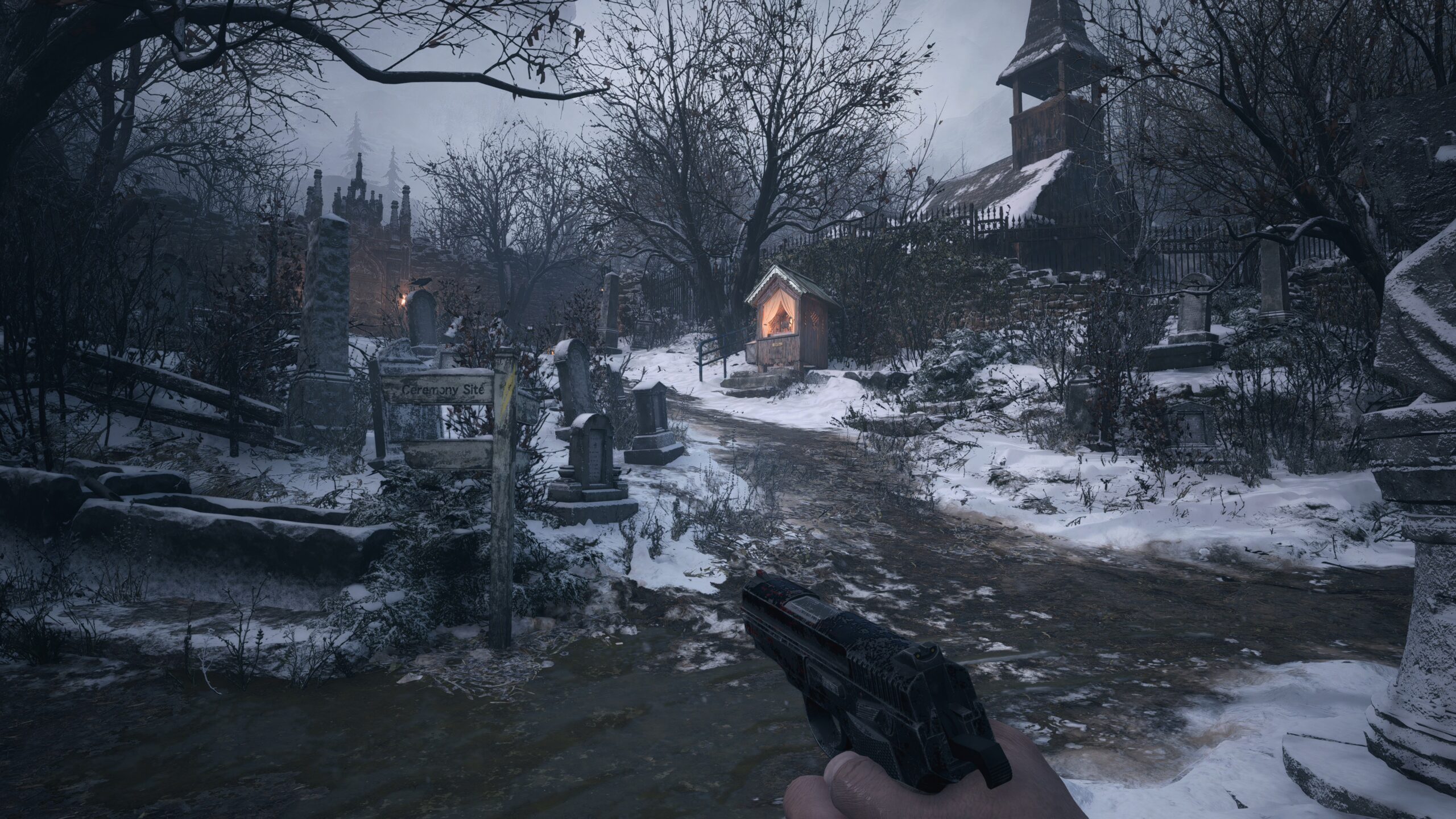 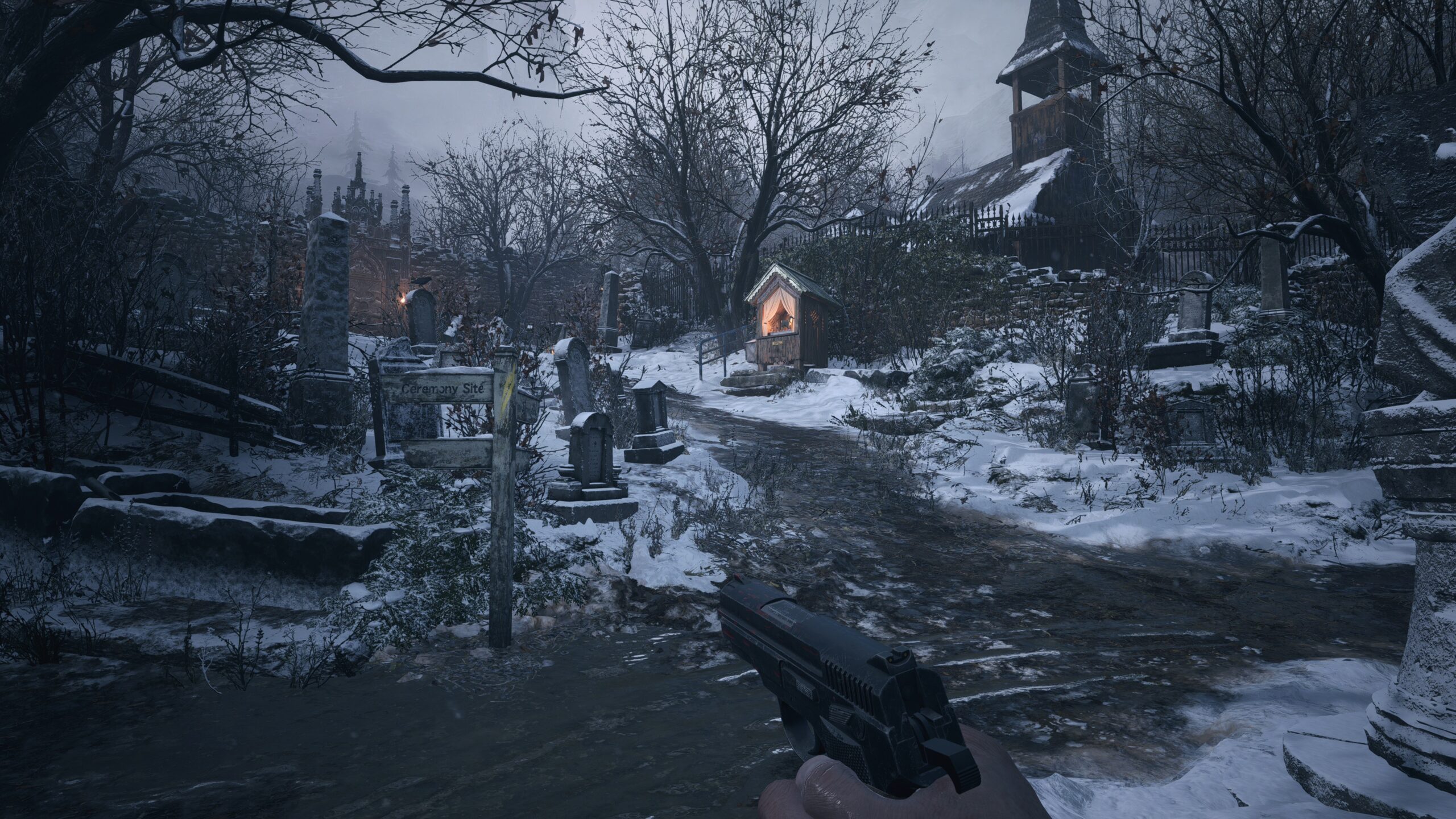 Before we wrap this one up we did want to touch on performance in Resident Evil Village as it stands right now, using the RX 6800 XT that we used for all the footage and scenes you’ve seen in this video with the drivers AMD sent over and compare it to the RTX 3080 using the latest public drivers at the time to see how performance stacks up with RT enabled when running at 4K. Both run well over the coveted 60FPS mark, with the RX 6800 XT pulling 75FPS on average and the RTX 3080 pushing 88 FPS on average, leaving both of these cards more than capable of delivering an uninhibited 4K experience with Resident Evil Village.

At the end of the day, the RE Engine does a spectacular job in Resident Evil Village, a true showcase of what it can do. Now admittedly the ray tracing here isn’t going to fundamentally change the game but does it ever make the world of Resident Evil feel more alive, which is kind of weird for a game with so much death. Admittedly I ended up playing through the entirety of the game in my living room with my GTX 1080 so I didn’t play through the story with Ray Tracing but there were quite a few times I could really tell that things just didn’t look right. Well either way let us know how you felt about this type of coverage with ray tracing games, I very much enjoyed it and feel it gives you the audience a better look at things than just me changing settings and see how it impacts framerates. If you like it we’ll keep it going and get more involved with each passing title.