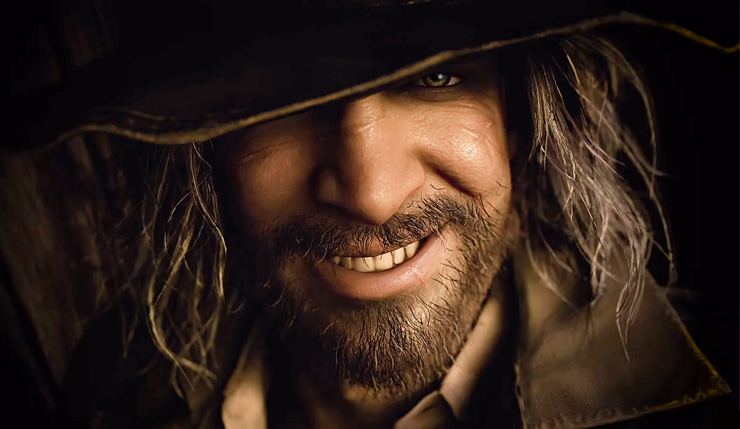 Needless to say, Resident Evil Village’s towering Lady Dimitrescu has been a big hit since she was revealed, but Capcom has hinted many times she isn’t the only big baddie in the game. They’ve already opened up about Mother Miranda, the mysterious leader of the titular village who’s worshipped as a god of sorts, but more horrors await you. Lady Dimitrescu is just one of the “Four Lords” that serve Mother Miranda, and IGN has detailed the other three in a new article.

Each of the Four Lords is inspired by a classic horror archetype – Lady Dimitrescu is obviously a vampire, Karl Heisenberg is a werewolf, Salvatore Moreau is a twisted sea creature, and Donna Beneviento is a ghost (although perhaps not literally) with a creepy doll to boot. Here’s a bit more detail about the game’s three non-Lady-Dimitrescu villains…

As mentioned, Heisenberg seems to be a werewolf and commands the army of “lycan” enemies you’ll face in the game. He also wields a pretty mean hammer. His home base is Heisenberg’s Factory, a semi-modern industrial area that lacks the ice and snow of the rest of Resident Evil Village's map.

Salvatore Moreau is inspired by stories of mermen, but don’t think The Little Mermaid – this is a Lovecraftian “horrors from the deep” type of situation. Capcom says they’ve specifically tried to make Moreau the “most repulsive character on Earth.” Moreau has set up a base in a swampy reservoir near an abandoned fishing village.

Finally, we have Donna Beneviento, who’s clearly inspired by the imagery of haunted house flicks. She keeps her face covered at all times, and her doll Angie seems to have a mind of her own. Her home base looks to be your classic spooky mansion, which Capcom hints may borrow elements from the tense opening hours of Resident Evil 7.

Intriguing stuff! I like that Capcom has basically decided to make Resident Evil Village every type of old-school horror movie in one. As a reminder, the second limited-time PlayStation demo, which lets players explore the castle area for 30 minutes, will be available tomorrow (April 24) evening. Capcom has released a newly-remixed trailer to get folks hyped...