This year we got to rejoice some of the most anticipated and critically acclaimed triple A video game releases in the video game history, but despite all the great titles that set new records, it was a 2012 video game that ranked No. 1 on the annual list of the best-selling games on Steam. Preliminary sales report reveals that online first-person shooter Counter-Strike: Global Offensive sold the most copies worldwide this year, surpassing the likes of GTA V and Fallout by far. 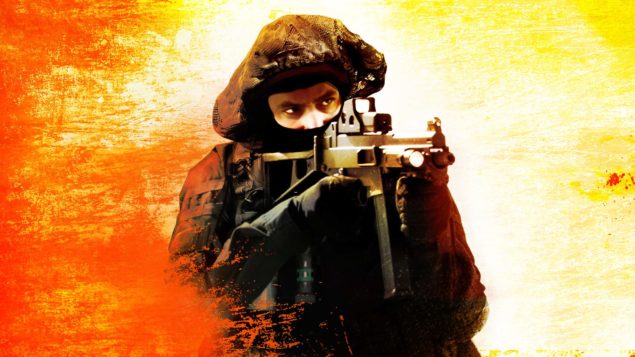 Steam Spy creator Sergey Galyonkin recently put together and published an initial report on Medium, revealing preliminary results for on Valve Corporations’ digital PC video game content distribution platform. The report lists games that sold the most copies globally in 2015, and offers sales data for games sold in each individual region in which the platform is available. While Fallout 4 ranked just above GTA V in the list of of 2015 in the US, having sold just under 1 million copies, Valve’s own 2012 FPS topped the chart worldwide, with more than 5.6 million copies sold.

The amount of copies sold by Counter Strike: Global Offensive is significantly higher than that of Rockstar’s blockbuster Grand Theft Auto V’s, which managed to sell a little under 3.6 million copies. Fallout 4 took the third spot on the list, selling over 2.4 million copies globally, and ARK: Survival Evolved managed to exceed expectations with more than 2.1 million sales even though the game’s launch on Early Access was pretty crummy.

Of course, it should be kept in mind that Steam Spy is not run by Valve, and these figures shared here are come from examining public profiles on Steam, this means all these figures are estimations and aren’t necessarily precisely accurate. Also note that the numbers only count games activated from April 1 to December 20. "I don't have any data before that," Galyonkin wrote in his post. “I did my best to filter out giveaways and temporarily free games (from the lists), but all lists here might contain some mistakes,” he added.

Galyonkin also pointed out that the report doesn’t count in the sales from Steam 2015 Winter Sale, as it started on December 22. He says he will update the sales charts in January after the Winter Sale ends. Despite the list not being accurate, it is still very likely Valve’s strategic shooter would have topped the global sales chart, keeping in mind that it has been up for purchase for the entire year. Among the games released in 2015, GTA V is obviously the topper with Fallout 4 sitting in second place, which is still a massive achievement for Bethesda given that the game was only released in November.

You can check out the global sales chart for overall best selling games on Steam in 2015 below, along with a chart showing only the games that were released in 2015. Head over to Medium to see Steam Spy 2015 sales charts for figures based on sales in individual regions, including the US and UK. 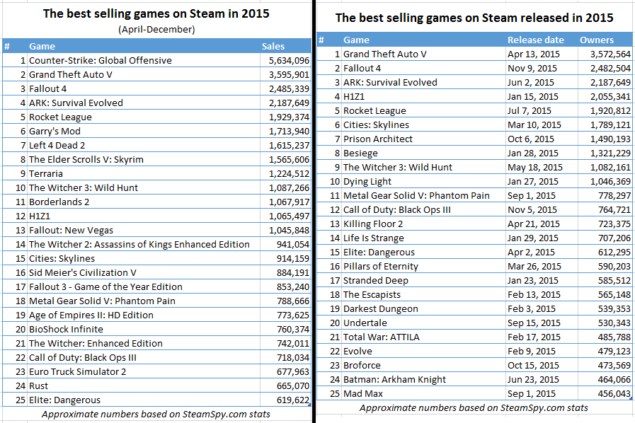