For some people the entire concept of jailbreaking an iPhone, iPad or iPod touch might be too complicated, but it does bear fruit. A jailbroken iOS device opens up a plethora of options for configuring your device in a way Apple would have never allowed it to be configured.

There's a new jailbreak tweak that went live on Cydia today and it is absolutely a must have for jailbroken iPhone owners. The Turn 2 Hangup jailbreak tweak allows you to reject incoming calls on iPhone by simply turning it upside down. 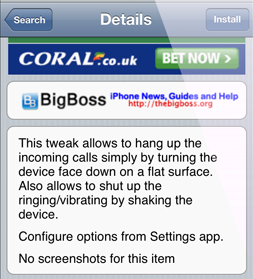 If I remember correctly, back in the day there were some Nokia cellphones that had this same functionality. This feature is particularly useful for situations in which it would be hard to look at the screen of your cellphone even if it is just to reject an incoming call. Just by turning the iPhone face down, an incoming call can be ignored. All this is achieved with the help of the iPhone's accelerometer.

That's not all though. Turn 2 Hangup jailbreak tweak as a couple of other interesting features as well. For example shaking the device will automatically mute the ringtone. The same motion can also cease vibration on the device. There won't be any additional icons on the Home screen after this tweak is installed from Cydia, but a menu is added in Settings.app through which this tweak and its features can be turned ON or OFF.

The best part is that Turn 2 Hangup is available as a free download. You can get this tweak right now from BigBoss repository in Cydia. The developer has not provided any specific iOS version with which this tweak is compatible with, my guess is that it would pretty much work on any jailbroken iPhone. Yes, you do need to have a jailbroken iPhone to install and get this tweak to reject incoming calls on iPhone by turning it face down!