Converting sunlight into electricity is a very arduous process. The process is still inefficient as compared to other forms of renewable energy. In academic experiments, we are able to create solar panels which can convert 40 percent of solar energy into usable electricity. Consumer cells as compared to those used in the lab for research are considerably less efficient. Consumer cells have a theoretical efficiency ceiling of about 29 percent meaning that actual solar cells which have efficiency in the lower 20s are quite excellent.

Japan’s Kaneko company has recently announced that they were able to develop a silicon solar cell with an efficiency of 26.6 percent breaking the 2015 record. The score is only 0.7 percent higher than the 2015 record but still this is no simple feat.

The research team from Kaneko company explains,” Improving the photoconversion efficiency of silicon solar cells is crucial to further the deployment of renewable electricity”. They also said, “This result confirms the strong potential of silicon photovoltaics."

In order to achieve further improvement in efficiency the team layered silicon inside individual cell compartments to minimize band gaps where the electrons cannot exist therefore not wasting solar energy. This approach is called the thin-film heterojunction optimization which was improved by the researchers at Kaneko company.The researchers analyzed what factors kept the solar cells from reaching further efficiency and improved them. 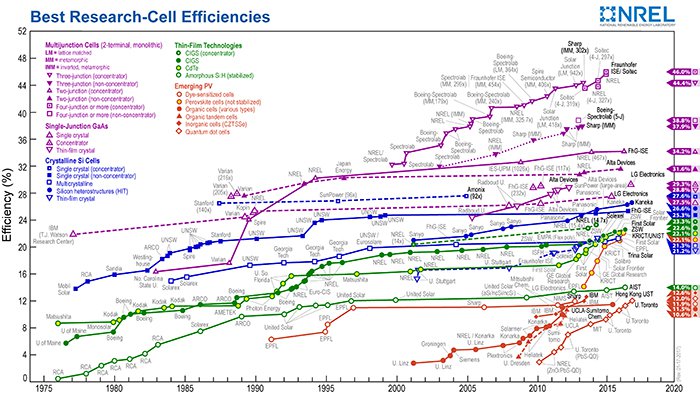 A graphical representation of current solar cell efficiencies by NREL

One of the methods which they used to improve the efficiency of the solar cells was to place low-resistance electrodes toward the rear of the cell, away from the exposed side so that the number of photons which are collected in the front can be increased. In the second technique the researchers used to further improve the photon count was to use amorphous silicon and anti-reflective layers on top of the cells which protected the cell components and reduced the sunlight being lost due to reflection.

Other than the fact that the efficiency of the solar cells was increased the solar cells which were used by the researchers were produced using the same production process for consumer cells so it won’t be a surprise if we start seeing these solar cells in the market soon. We always appreciate such efforts of researchers who are trying to create a better and more sustainable world for us and the future generations. Let us know how you feel about this broken record in the comments below.