Solar Cells Lighter Than Soap Bubbles Have Been Invented By Scientists

Scientists have made a major breakthrough by making extremely thin and flexible photovoltaic cells. Apart from those characteristics they are also extremely lightweight, how light? Well let’s just say that they can rest on top of the surface of soap bubble without popping it!

This is just incredible!

These cells have an immense importance since they are both lightweight and thin. They can be used for a lot of different things ranging from smart clothing to even helium balloons

"It could be so light that you don’t even know it’s there, on your shirt or on your notebook," said one of the researchers, Vladimir Bulović from MIT. "These cells could simply be an add-on to existing structures."

It’s just a proof of concept for now and is expected to progress in the near future however the characteristics and the versatility of the whole concept make it so interesting for us to know. The point is how the scientists actually managed to make such a cell which is so light and thin at the same time, as per the report the key to this success is the way the solar cell is combined itself. Adding to that, the substrate as well as the protective coating that the researchers used in the process of making this solar cell is what makes it so unique in nature.

“This demonstration by the MIT team is almost an order of magnitude thinner and lighter” than the previous record holder, says Max Shtein, an associate professor of materials science and engineering, chemical engineering, and applied physics, at the University of Michigan, who was not involved in this work. As a result, he says, it “has tremendous implications for maximizing power-to-weight (important for aerospace applications, for example), and for the ability to simply laminate photovoltaic cells onto existing structures.”

“This is very high quality work,” Shtein adds, with a “creative concept, careful experimental set-up, very well written paper, and lots of good contextual information.” And, he says, “The overall recipe is simple enough that I could see scale-up as possible.”

Since the researchers made the cell and the substrate grow together, they prevented the substrate from getting contaminated from dust and other impurities. Parylene, which is a very flexible and commonly used polymer, was used as a substrate and for over coating as well. Also, DBP (dibutyl phthalate), which is an organic material was used as a primary light absorbing layer in the process. 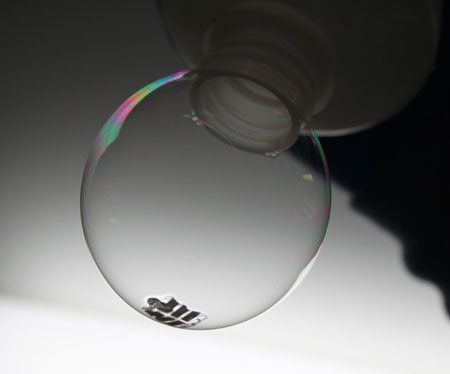 The process takes place in a vacuum chamber, not including any solvents or chemicals and is working at room temperature. Moreover vapor deposition technique is used to make sure that a very thin coating of the material is made and here the cell and the substrate are made to grow together.

In fact, they may be too thin to be practical: "If you breathe too hard, you might blow it away," said Joel Jean, another of the researchers involved.

According to the researchers who made this, the vacuum based layering can be used anywhere particularly to deposit solar cells on any material may it be fabric, paper or a soap bubble. However this is subject to some work and more research before it will actually work at massive scale. Still it is incredible what how much science has progressed, please let us know your thoughts in the comments below.