Razer (HKG:1337) reported its best half-year revenue as a listed company this week, with revenue hitting $357.2 million, up 30% from a year earlier.

While Razer still posted a loss, its loss has narrowed during the last year given the uptick in revenue. Razer also reported that its income streams are diversifying. Three years ago, the company sourced revenue almost solely from PC hardware sales, but now that's changing. Per reports, the company sourced 85% of its revenue from hardware sales -- down from 99% three years ago -- and approximately 15% from services. Razer reported $303.7 million in hardware revenue for the first half of 2019, representing 26.2% growth YoY, while $35.7 million came from services, a growth of 110% YoY.

Razer says it has 70 million registered user accounts for its various gaming services, an increase of 40% from a year earlier. It reports that its e-Pay wallet app, which launched last year in Malaysia and Singapore, has about 1 million users.

Despite the growth in revenue, Razer still reported a net loss of $47.7 million for the period. The company reports it has no debt and cash of $528.9 million.

Razer also announced it has inked a partnership with Tencent (HKG:0700) to support its cloud gaming efforts -- which are designed to be a regional competitor to Stadia from Google (NASDAQ:GOOG) and respective offerings from console vendors. The two companies -- which have previously collaborated on mobile gaming -- would work together to develop hardware that's optimized for Tencent's cloud gaming service.

"Thanks to a continuous strengthening of our cooperation, we can offer an unrivaled cloud-based gaming experience to our increasingly sophisticated gaming community, supported by our integrated ecosystem of hardware, software and services full-stack cloud gaming solution that integrates audio and video transmission technology,” CEO Min-Liang Tan, said in a statement. "We expect to continue to see solid revenue growth underpinned by our ecosystem of hardware, software and services. Further, we expect our profit profile to continue to improve as evidenced by the narrowing of our net loss position this first half of the year.”

Razer is a Youth Marketing Brand

Since its inception, Razer has marketed itself as something like a king of the gaming industry. Sympathetic press, which labeled Razer with terms like the 'Apple of the Gaming World', helped craft this persona.

To be sure, it generally does well within the gaming keyboard and mice market: it cited data from research firm NewZoo in its IPO prospectus that showed it had a lead within China in this market, and generally came in first or second place within North America and Europe. However, its notebooks and gaming smartphones ship in thin volumes: approximately 140,000 per year for notebooks and roughly 45,000 a year for smartphones. Esports isn't going that well for Razer, as Wccftech previously reported pro-eSports gamers, which are usually heavily sponsored, ditching its gear for others on the basis of performance and quality.

Thus, the reality is Razer really isn't what many people think it is. In fact, the biggest opponent of the idea that Razer is some sort of Apple-like giant in the gaming world is the stock market. Razer was down 40% in 2018, significantly underperforming the market. Time to change the tune.

Which is why CEO Min-Liang Tan's recent interview with Hong Kong's South China Morning Post is interesting. When pressed by the interviewer to specifically define Razer, Tan said: “We’re a youth and millennial brand.”

And what's the biggest growth story at Razer? Services, not hardware.

So instead of trying to claim that Razer the 'Apple' of the gaming world, now Tan has a much more realistic public perception of what his company is: It's a gateway to an audience of gamers that's fiercely loyal to the brand. Data from NewZoo shows that Razer has the highest conversion from brand loyalty to multiple product ownership (chart below). Gamers that buy Razer tend to buy a lot of it; they are more likely to own multiple products compared to those that buy its competitors: 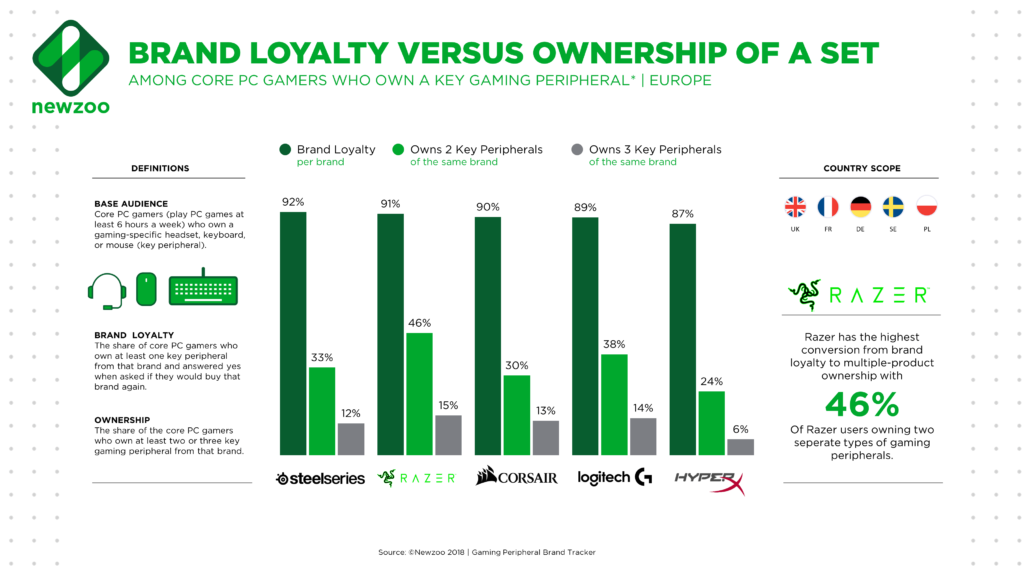 As the SCMP article pointed out, Tan is trying to “monetize” the community by partnering with more companies eager to market to the youth segment. “I will not say we’re tapping … we created gaming culture, and we’re growing alongside with it,” Tan told SCMP. “Gaming has become a euphemism for youth.”

Just like Vice Magazine is a gateway for Millenials at-large, Razer is a gateway for gamers. The future of the company is through partnerships. Razer's e-payments app is a way for banks and credit card companies to access a market niche that's willing to spend. Razer's energy drink that launched this last June was a hit, next up could be a collaboration with a large food & beverage company to launch a specialized gamer-centric lineup of drinks and snacks.

This is where the margins are. Maybe, by this time next year, Razer will be a profitable company.