Apart from enhancements for both the Pro and One X, Ubisoft also announced upcoming Rainbow Six retail changes and Outbreak packs, which will only made available during the four-week Outbreak Event. “Within the duration of the 4 weeks event, an exclusive collection of cutting edge HazMat cosmetic will be available”, Ubisoft writes on its blog. “This gear will be found in the Outbreak Packs.”

These Outbreak packs will only contain cosmetic items, and is composed of 50 unique items which can be acquired for 300 R6 Credits each.

The Outbreak Collection is composed of a total of 50 unique items, and no duplicates. What this means is, if you acquire 50 Outbreak Packs, we guarantee that you will have the entire Collection, including the Elite Uniform. They will contain universal weapon skins, unique weapon skins, headgear, uniforms, charms, as well as an Outbreak Collection exclusive of this season’s Elite Uniform. While there is a unique variation of the Elite Uniform available in the Outbreak Packs, the standard version of this Elite Uniform will be available for direct purchase once the event has started. All items in the pack will be either Rare, Epic, Legendary, and there will not be any content overlap between the Outbreak Packs and the Alpha Packs.

The Outbreak Packs can only be acquired for 300 R6 Credits each. That being said, a few other Outbreak rewards will be available through game play, and will be awarded based on other criteria to be disclosed at a later date.

The Outbreak Collection will contain cosmetic gear for the following Operators:

As said, Ubisoft is also making changes to the retail version of the game with new buyers of the standard edition (now advanced edition) will get 10 Outbreak Collection Packs for free. Existing players who have bought the standard edition and season passes will still need to pay for these extra packs.

We’ve included a chart which shows the changes made to the retail versions below: 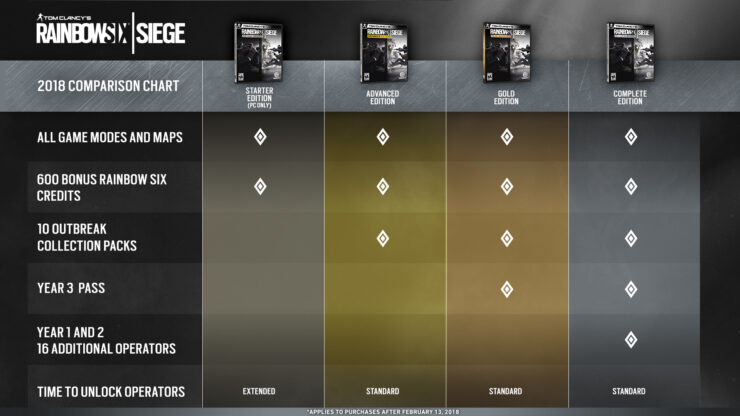