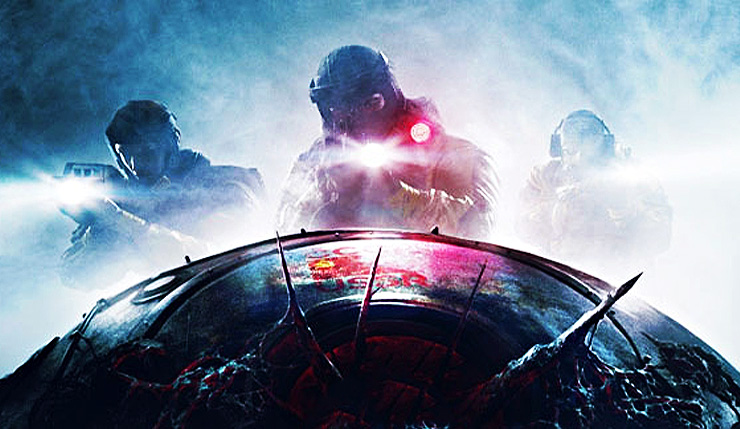 No, that title isn’t a troll – aliens (or, at the very least, some sort of non-human threat) is coming to Rainbow Six Siege. Ubisoft’s tactical shooter will kick off its third year of content with the PvE Outbreak event, which requires players to work together to take out a mysterious “exotic parasite” that threatens to overtake the world. You can check out an Outbreak teaser trailer, below.

“A few days ago, a mysterious space capsule crashed near Truth or Consequences in New Mexico. It turned out to be carrying an exotic parasite, the Apex, which infected the area and turned the town’s populace into monsters. The Quarantine Zone is the only thing keeping it contained but it will not last for long. If the parasite gets out, it would be a disaster of global proportions. Millions would die. Rainbow’s mission is to enter the devastated town and destroy the parasite’s roots before this happens.”

And here’s how the co-op event will play out:

“Outbreak takes Rainbow Six Siege gameplay and drops it in a fresh, innovative setting. The parasite is unlike any threat the Rainbow Six team has ever faced before. From exploding monstrosities to hulking horrors, these armored monsters will bring the fight close and push the destruction engine to new heights – they won’t hesitate to tear through walls to get to you. Five archetypes of infected will challenge players in Outbreak, each with their own distinct abilities. Players must react quickly to fortify their positions and control their environments while under pressure. Play smartly and tactically to find new ways of using your arsenal, against a foe that doesn’t take cover and engages instantly in close combat.”

Ubisoft will be serving up three new co-op-exclusive maps for Outbreak, which will be larger than the usual PvP maps. You’ll only be able to use certain select Operators on these co-op maps, including Smoke, Ying, Buck, Kapkan, Ash, Doc, Tachanka, Glaz, and a pair of new Operators.

Speaking of which, Outbreak is part of Operation Chimera, the first season of the third year of Rainbow Six Siege content. In addition to the co-op event, Operation Chimera will be serving up two additional Operators – one is from France and makes use of a special drone, and the other is from Russia and uses “self-dissolving nanobots” to their advantage.

Rainbow Six Siege: Operation Chimera and the Outbreak event kick off on PC, Xbox One, and PS4 on March 6. More details about the two new Operators will be revealed at the Six Invitational finals on February 17.