The Xbox Store has once again revealed the install size of an upcoming title. This time around, it’s the file size of Ubisoft’s upcoming Rainbow Six Siege.

The release date of the title is still 1 month away, but already the Xbox Store has already given away the game’s file size on the Xbox One. Earlier, file sizes for Resident Evil Zero, Need for Speed, Rise of the Tomb Raider, and Fallout 4 were revealed through the Xbox Store.

According to the listing, Siege weighs in at 16.54GB, and as recent file sizes go, this is modest at least. Recent titles tend to be over 30GB in size, with the recent Batman: Arkham Knight taking up to 50GB on your hard drive. 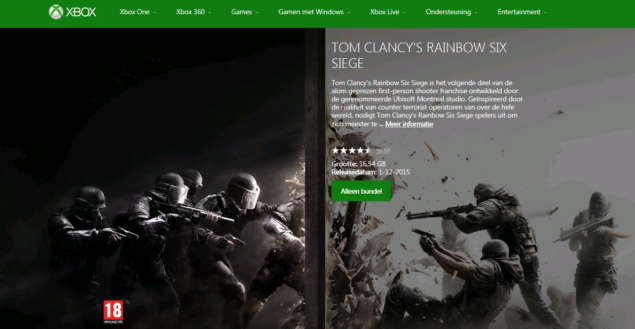 Developer Ubisoft Montreal, is the first publisher to adopt the use of Havok FX technology within Rainbow Six: Siege. Havok FX is a brand new CPU-driven software product that is said to deliver unprecedented levels of detail and physics to particle effects. Havok FX allows developers to physically enable particle systems and to add a new gameplay dimension to previously aesthetic visual effects.

“Havok FX brought all we needed to push the realism of Realblast, our procedural destruction engine, to a whole new level.  With each explosion you see debris, shrapnel and fragments all flying through the environment and reacting dynamically, making each assault even more tense and realistic,” says Mark Besner, Lead Programmer at Ubisoft Montreal.

“Havok FX isn’t just a software package; it’s technology that takes advantage of the step-up from the previous console platforms toward the incredible power of next-gen hardware,” says Brian Waddle Vice President of Sales & Marketing at Havok. “This was the perfect opportunity to roll up our sleeves and collaborate with the Rainbow Six Siege team to demonstrate the ability and power of Havok FX.  This incredible title showcases the future of particle physics and debris effects on CPU, and we believe the industry as a whole will demand the same high level of fidelity by leveraging Havok FX in future games. Once consumers see Rainbow Six Siege in action, gamers are going to demand this level of quality and immersion from the games industry.”

Rainbow Six released on December 1st for PC, Xbox One and PS4. The game was originally scheduled for a release in October.