The Xbox Store has listed the file size for the upcoming ‘Rise of the Tomb Raider’ and if the listing is to be believed, it’s rather 'flat'. Unlike Lara's, the game's 'measurements', are kind of small compared to recent next-gen titles.

According to the listing the game from developer Crystal Dynamics weighs in at a meager 20.47GB – only 6 GB’s larger that the enhanced version of its prequel on the Xbox 360. 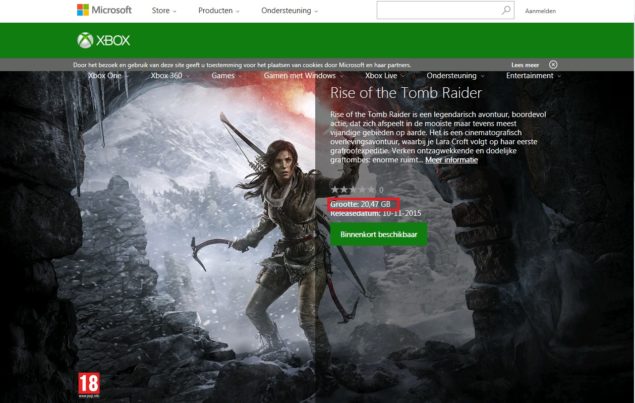 Although the listing can merely contain a placeholder size for the game, the size listed is rather specific. Recently a Reddit user created a Xbox One game size calculator which includes the sizes of most Xbox One game. For comparison Xbox One launch title Forza Motorsport filled up 40GB of your HDD space, while the RPG ‘Final Fantasy Type-0 HD’ weighs in at 22.35GB.

the addition of snow deformation, improved TressFX, volumetric lighting, and various other features clearly makes for a more impressive looking game overall - and previous sequences promise so much more.

However Digital Foundry also wrote that there are visible edges that appear lower in resolution than the rest of the image. DF adds that specular effects help to produce some attractive surfaces in sunlight, shadowy regions appear flat by comparison.

I suggest reading the full report from Digital Foundry to avoid misunderstanding.

We know that file sizes don’t really mean anything – usually it’s a compressed download size. The listed size does make me wonder though how Crystal Dynamics managed to fit one of the most beautiful next-gen titles on half a Blu-Ray.