Everyone is on board with Integer Scaling now and I couldn't be happier. Intel rolled out the red carpet to it with their Gen11 iGPU, which admittedly was extremely limited, then NVIDIA gave Turing owners the Integer treatment, and Radeon was last to follow. But, Radeon did a solid and cast a pretty wide net to their customer base by going for multiple generations with their Adrenalin 2020 release. We'll break down that later on.

But first off, what is Integer Scaling? Integer Scaling is a method of upscaling an image where you basically scale up the image on a whole pixel basis. Rather than just taking whatever resolution you choose and stretching it to fit your monitor, it ONLY scales the image on a perfect pixel ratio. It is common knowledge that a resolution like UHD 4K (3840x2160) is 4x the resolution of 1080p or 2x the verticle and 2x the horizontal resolution (It's also 3x the verticle and horizontal resolution of 720p) but if you run 1080p on a UHD 4K panel or TV it looks reasonably 'soft'. This is because it just stretches the image to fill the screen but doesn't actually account for the pixel ratio so you end up with a slightly blurred image that simply isn't as sharp.

Integer Scaling takes that image and will then match up the pixel ratio to fill the screen on a per-pixel basis allowing for an excellently crisp image. While most marketing and talks will have you thinking this is only useful for retro pixel art games, it can also make something like the Ryzen 5 3400G power a 1440p panel for desktop, browsing, and work use, but allow you to game at 720p (I know people cringe at that but hear me out) since 720p does a perfect 2x scale to 1440p and with Integer Scaling is now much more crisp and clear on a 1440p panel than 720p will ever look on a 1080p panel.

By that same measure, Integer Scaling can make pairing something like the Radeon RX 5500 XT with a 4K panel a viable option so that you can utilize the full desktop resolution but when gaming you can use a more comfortable resolution like 1080p and still get those crispy edges as if it were actually a 1080p and no more of that soft blurry edges. This applies to others as well, so if you're using something like a GeForce GTX 1650 SUPER you could do the very exact same thing. I feel that a lot of people get caught up in the 'Integer Scaling is for Pixel Art and Retro Games' trap when it is much more useful than that. 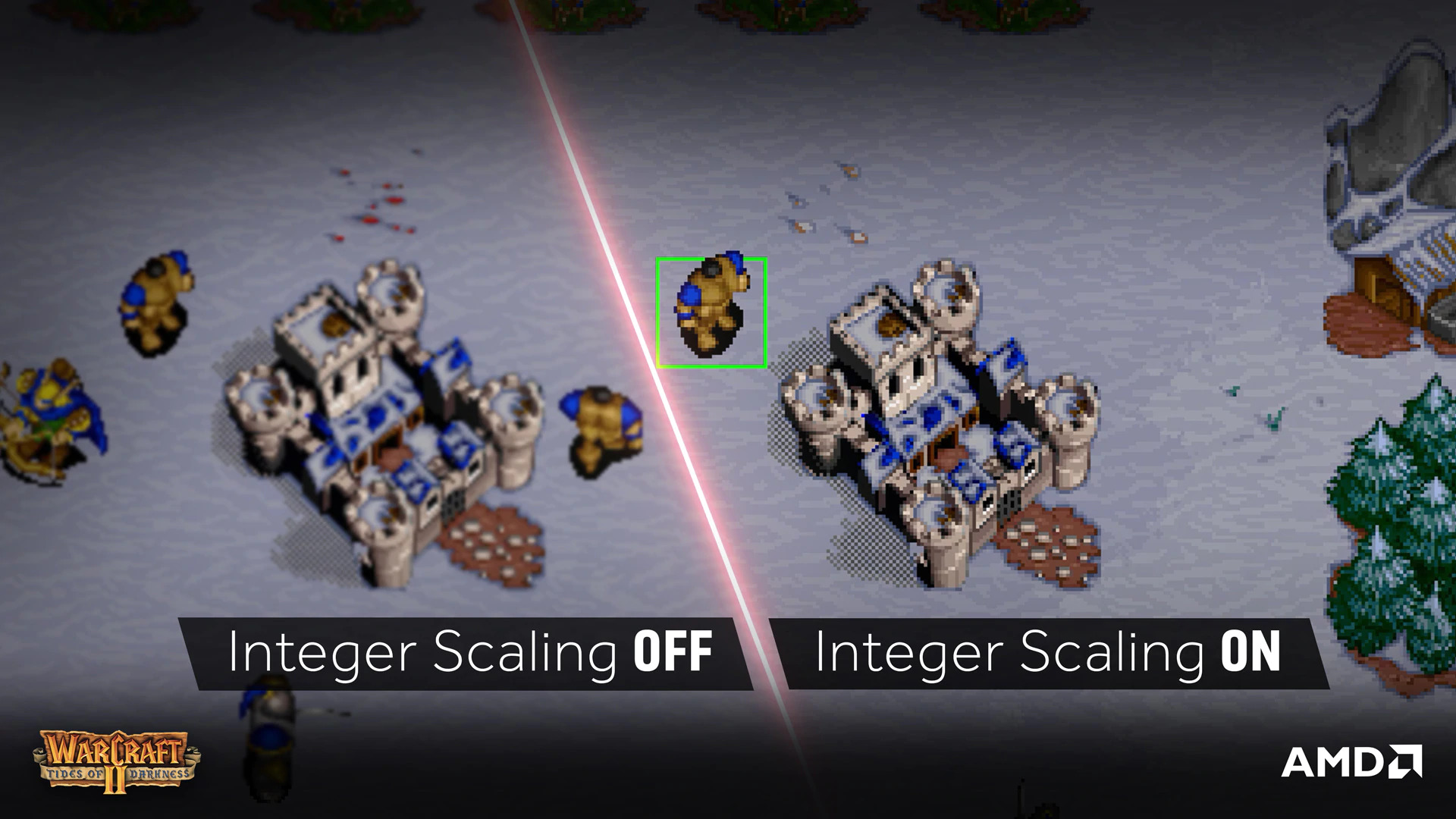 But there is a catch. Intel only allows you do this with Gen11 Graphics and on, NVIDIA only supports it with their Turing based architecture, but Radeon supports ALL GCN and newer right? Not quite. The initial reporting back when the updated Radeon Software package came out in December 2019 everywhere you looked stated that ALL GCN and newer were supported. That's pretty exciting as it stretches way back to the initial Radeon HD 7000 Series, I was excited because now my Ryzen 5 3400G was about to get a new lease on life as the heart of my HTPC, and I was going to be able to use this old R7 250 to set up a low power classic gaming rig for fun.

Well, that's when I found that reality wasn't quite what the reports said. Yes, my Ryzen 5 3400G was good to go, but not my old R7 250, what gives? It's GCN and the option showed up in the Radeon Software. Turns out that while it does support GCN, it's MOST, but not ALL GCN. The support for Integer Scaling actually begins with second gen GCN and the only HD 7000 Series card that is supported is the Radeon HD 7790 which is Bonaire based and ended up becoming the heart of the R7 260 and R7 360. The Radeon R7 370 is not supported either because it was still running the Trinidad core that was an evolution of Pitcairn, or better known as the Radeon HD 7800 Series. The support for Integer Scaling, as far as my conversations have led to, appear to be tied to the hardware display scaler in the cards. An easy rule of thumb of whether the card supports Integer Scaling can be "If the card supports FreeSync then it supports Integer Scaling."

So what is supported then? AMD did update its marketing to be much more clear and concise. If you go to their Integer Scaling landing page you'll find a concise footnote detailing the extent of support.

There is nothing to panic about as a result of this. Radeon still gave a lot of their customers' access to a great feature that I feel people should be taking advantage of. But due to initial messaging and the option being available in the settings for cards that don't actually support the feature. Think outside of the box with Integer Scaling and don't limit your thinking to just retro or pixel art games. The image at the top of this article is my personal HTPC that runs a Ryzen 5 3400G and I use it to play games at 1080p or 720p (game dependent) on my 55" UHD TV, before Integer Scaling it was too blurry for me to enjoy, now my Xbox is a bonified UHD Blu-ray player for good.