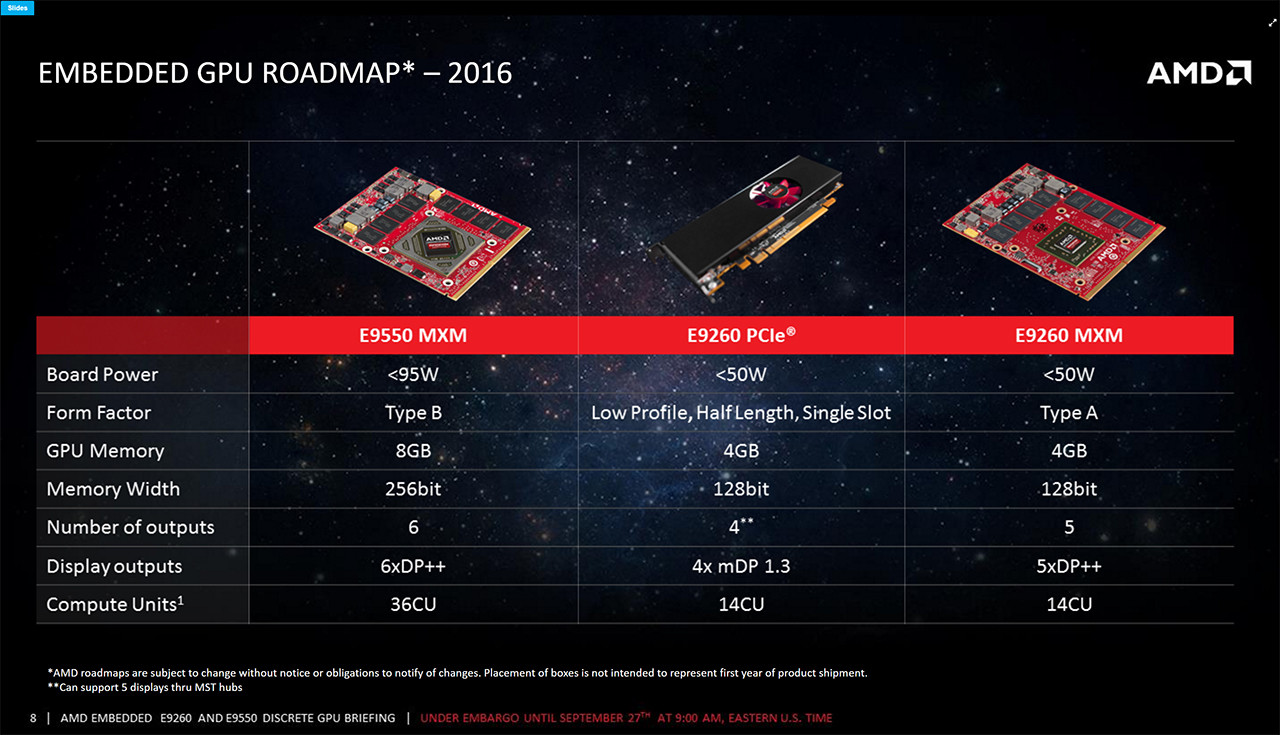 AMD launched their embedded applications GPU lineup yesterday and I thought it would be worth covering albeit a bit late. The embedded lineup will be replacing the older E8XXX series lineup that the company introduced last year. The presentation design (the cosmic background) hints at Polaris architecture being the show runner this time although the core configurations have remained about the same as the last generation. Thanks to the shift to 14nm architecture however, the performance per watt has more or less doubled across the board for the lineup, making it a very significant update for those concerened.

The older E8950 MXM based GPU has been succeeded by the AMD Radeon E9550 MXM based GPU. The core configuration has remained at 36 CUs although the peak compute performance has been almost doubled to an impressive 5.8 TFLOPs in single precision tasks. The GPU supports GPU supports 4K HEVC encode and decode (which was present in the E8XXX generation as well) and has the same 95W of TDP as its predecessor. The GPU is packaged in the MXM Type B form factor and will have up to dual mode 6 Display Port outputs. The bus width remains at 256 bit with 8GB of GDDR5 memory on board. This graphics card appears to be based on the Polaris 10 GPU from AMD based on the 14nm FinFET architecture from GlobalFoundries.

Secondly, we have the AMD Radeon E9260 PCIe GPU. This particular flavor of AMD’s embedded series features a low profile PCIe based design with a half-length, single slot shroud as well as a blower type fan. Useful for server applications, this nifty little GPU will maxes out at around 2.5 TFLOPs of compute with only 14 CUs on board (almost the same amount of power with half the CUs as last generation’s flagship). The graphics card is equipped with a 128-bit bus / 4 GB of memory and is rated at 50W TDP. It also features 4K HEVC encode and decode which is a step up from its predecessor (The E8870 Embedded GPU series) which only featured dual HD encode and decode. The graphics card has 4 mDP output ports.

Lastly, we have the AMD Radeon R9260 MXM based GPU. This is a similar 14 CU variant of the E9260 PCIe and succeeds the E8870 generation of embedded Radeon graphics cards from AMD. Based on a Type A MXM form factor, the GPU should have compute performance similar to its PCIe-based sibling at around <2.5 TFLOPs of single precision compute. It also has a 128-bit wide bus with 4 GB GDDR5 memory as well as 5 dual mode Display Port outputs. The TDP for the GPU has been listed at less than 50W (which means it should deliver very slightly reduced performance as compared to the PCIe variant).