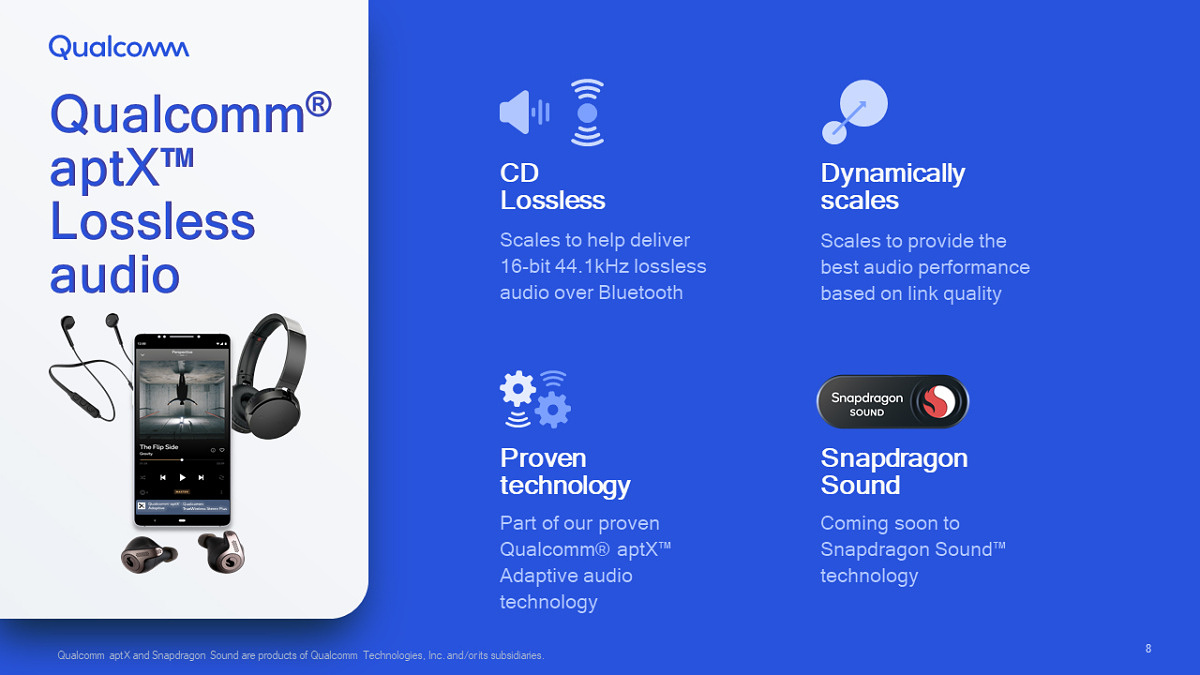 Qualcomm has done something nice for all the audiophiles who are still getting used to listening to music on Bluetooth headphones. The company has decided to announce the latest Bluetooth audio codec called the aptX Lossless.

Let's not beat around the bush and talk about some of the core details. The latest aptX Lossless by Qualcomm is the first Bluetooth audio codec that claims bit-exact transfer of CD-quality (16-bit, 44.1kHz) audio over Bluetooth. This means that your wireless headphones can finally support lossless sound. However, compression will still be used to fit the 1.4 Mbps bitrate of the CD into the more limited 1Mbps bandwidth that Qualcomm uses. Still, the company has ensured that they are using it entirely lossless compression.

Thanks to Qualcomm aptX Lossless, Bluetooth Audio Is About to Become Even Better

This is unlike the existing lossy Bluetooth codecs; the audio stream at the output is an exact match with the input when listening through aptX Lossless.

With the decision to move over to aptX Lossless, Qualcomm is getting the chance to greatly improve the data rate over its existing aptX and aptX HD codecs. As a matter of fact, it might end up exceeding Sony LDAC's 990kbps data rate. Although sustaining this high bandwidth is the main issue, Qualcomm has discussed how it solved using end-to-end control and optimization of its radio stack through the Snapdragon Sound ecosystem.

Qualcomm also notes that Snapdragon Sound is a requirement for sustainable aptX Lossless, and it intends for all the branded products to support the new codec in the future. Sadly, this also means that the existing line of products will not be backward compatible.

Thankfully, Qualcomm aptX Lossless is not another standalone codec. Instead, you are getting access to it through the aptX Adaptive tool suite. This means that devices will also benefit from the other codec features that Qualcomm has.

This decision by Qualcomm was mainly because of the ever so increasing music streaming platforms that support lossless formats. Apple Music, Amazon Music, Tidal, and many other are now supporting lossless audio, and Qualcomm really does not have any reason not to introduce something new and exciting.

With that said, aptX Lossless products and the Snapdragon Sound branding and interoperability testing should arrive somewhere in 2022.