Starting with the Snapdragon 778G Plus 5G, the new chipset is based on Qualcomm's Kryo 670 CPU cores, but the new chip can now boost up to 2.5GHz. The chip also features the same Adreno 642 chip, but it claims that it offers 20% better performance than before. Other specifications, including AI capabilities, 5G modem, and other wireless connectivity options, are still the same.

Next up, the Qualcomm Snapdragon 695 5G is a new chip and is an upgrade from Snapdragon 690. According to the company, the new chip offers support for both mmWave and sub-6GHz 5G, up to 30% faster graphics rendering and 15% improved CPU performance compared to the predecessor. The chip is passed on Kryo 660 CPU cores, and it also comes with Adreno 619 GPU. 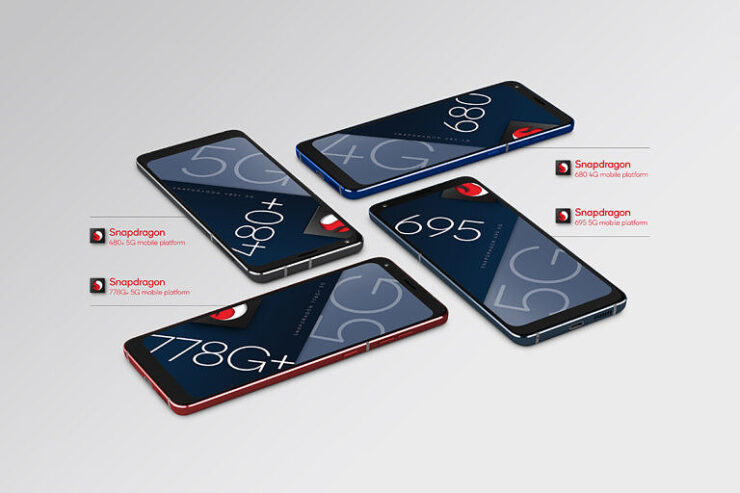 Moving further, the Snapdragon 680 4G is a new mobile platform for 4G smartphones that is built on the 6nm process. The chip uses Kryo 265 CPU cores and features Adreno 610 GPU. It also brings the Snapdragon X11 LTE modem. FastConnect 6100 Subsystem, Spectra 246 ISP, QC3 support. The chip is geared towards budget-friendly devices that offer an FHD+ display and 90Hz refresh rate as well.

The last one we have is the Snapdragon 480 Plus 5G; it is a bit of improvement over the Snapdragon 480 from earlier this year. You are still getting the same 8nm process featuring Qualcomm's Kryo 460 CPU and Adreno 619 GPU. However, you are getting better CPU and GPU performance than the previous model. The chipset is designed for affordable 5G phones, and it also features the Snapdragon X51 modem RF-system, support for FHD+ displays with a peak refresh rate of 120Hz, the Spectra 345 ISP, QC4+ support.

We can expect to see new devices featuring these chipsets from various companies ranging from HMD Global (Nokia), Honor, Motorola, OPPO, Vivo, and Xiaomi in the coming months.