Qualcomm: Even 5G iPhone Revenue Might Not Let It Breakout Past Record Barriers 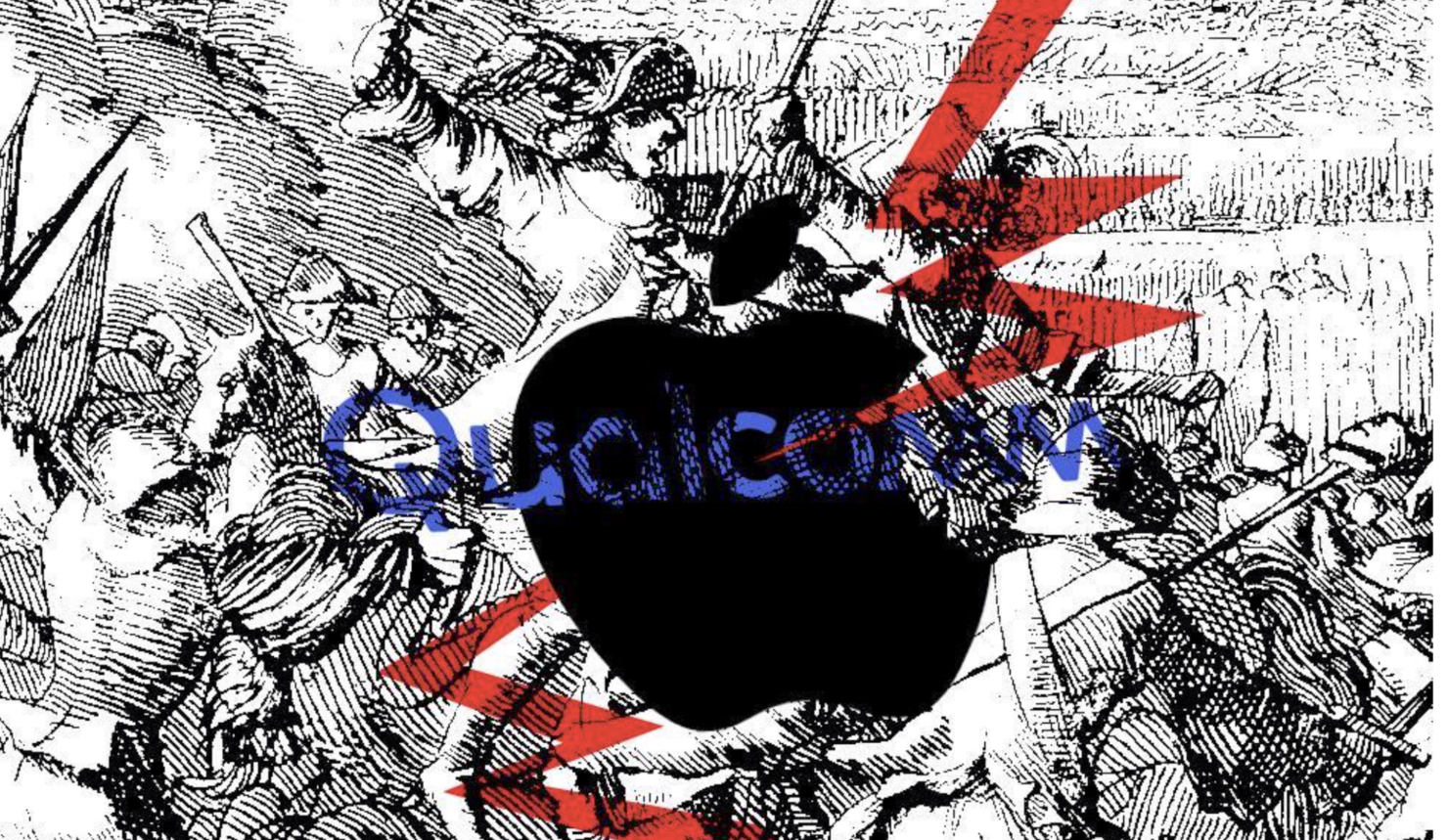 This great image is the courtesy of Slashgear.

San Diego chip giant Qualcomm Incorporated (NASDAQ:QCOM) is a unique company in terms of both its operations and placement. It is known for its licensing practices throughout the globe, the revenue from which is accounted for separately than from sales of its mobile station modems (MSM) and Snapdragon lineup of processors.

Qualcomm is also placed smack in the middle of the United States' upcoming 5G commercialization. While the company does not manufacture base station networking equipment used by carriers, it is nevertheless the strongest provider of end-to-end 5G mmWave and sub-6GHz products to smartphone manufacturers.

Still, market presence and stringent licensing practices are no guarantee for sound financial performance -  a fact that Qualcomm admits by stating that any decision that negatively impacts the company's licensing revenue carries with it an operational risk.

Given the upcoming 5G wave and the company's strategic focus on areas other than smartphones, it's time to see whether Qualcomm's current share price adequately factors in the company's future - or whether it is a tad bit optimistic.

To make sense of why Qualcomm will find it difficult to vindicate its current share price through 5G growth in the years 2020 - 2022, it's important to consider the company's two arms. Qualcomm sells its hardware such as the Snapdragon processors and modems through Qualcomm CDMA Technologies (QCT) and it receives license-based royalties from the companies using its product technologies through Qualcomm Technology Licensing (QTL).

Therefore, revenue from both arms is bound to increase at the same time once Qualcomm starts to make sufficient shipments of its 5G products. Additionally, once the initial sales boom has subsided, Qualcomm is still poised to earn through QTL. And naturally, given the strength of this business model, once is surprised to find that modestly optimistic revenue projections for the company reveal that the market has priced in future 5G growth, and overvalued the company's stock.

Qualcomm's serviceable addressable market (SAM) estimates for the year 2022 of its different operating segments are provided above, alongside their respective compound annual growth rates. The CAGR estimates, Qualcomm's revenue as a percentage of serviceable addressable market have been used to project the company's revenue for fiscal years 2020, 2021 and 2022 with the assumption that the company's stated CAGRs for the calendar year 2022 will extend six months into the next year to complete the fiscal year 2022.

The growth rate for QCT's Mobile Handset Platform is assumed to be 15% - a figure derived from Qualcomm's statements related to the area's SAM for 2022. Given that QTL earns its revenue from licensing, the segment has a high gross margin. Qualcomm believes this to reach 70% in 2022, and earnings before tax margin for the years in between reflects a gradual improvement created by higher revenues in the area as the company sells more 5G products and its licensing revenues increase.

5G earnings estimate is priced in Qualcomm's stock - analysis shows a downside of $3.85 per share

A big component of Qualcomm's valuation is the fact that the company has signed an agreement with Apple under which the latter will use its 5G modems on the iPhone. Our estimates above assume modest revenue from Apple. It also assumes that Qualcomm will face headwinds from the industry over sub-6 5G connectivity as opposed to mmWave. A device supporting mmWave requires more radio front end module and it carries the potential to drive up MSM revenues for Qualcomm significantly.

Reports from Taiwan have estimated that Apple intends to ship approximately 100 million 5G iPhones following launch. Given that the company is expected to be paying Qualcomm approximately $9/iPhone, we can analyze the impact the iPhone will have on the San Diego chip giant's share price. At this point, it's important to note that the following analysis depicted by the image preceding this paragraph and succeeding the next one builds on top of Qualcomm's fair value approximation carried out in this piece. Therefore, it carries with it the possibility to inflate what the company will earn from the 2020 and 2021 5G iPhone lineups.

Assuming that Apple's per-iPhone payment to Qualcomm for its products and technology is $10, and Apple buys 100 million such components in 2021 and 2022, then Qualcomm's revenues will grow by $1.1 billion in each fiscal year. The growth exhibited by QCT is superimposed on QCT, and the company's final net sales for both segments are shown above. 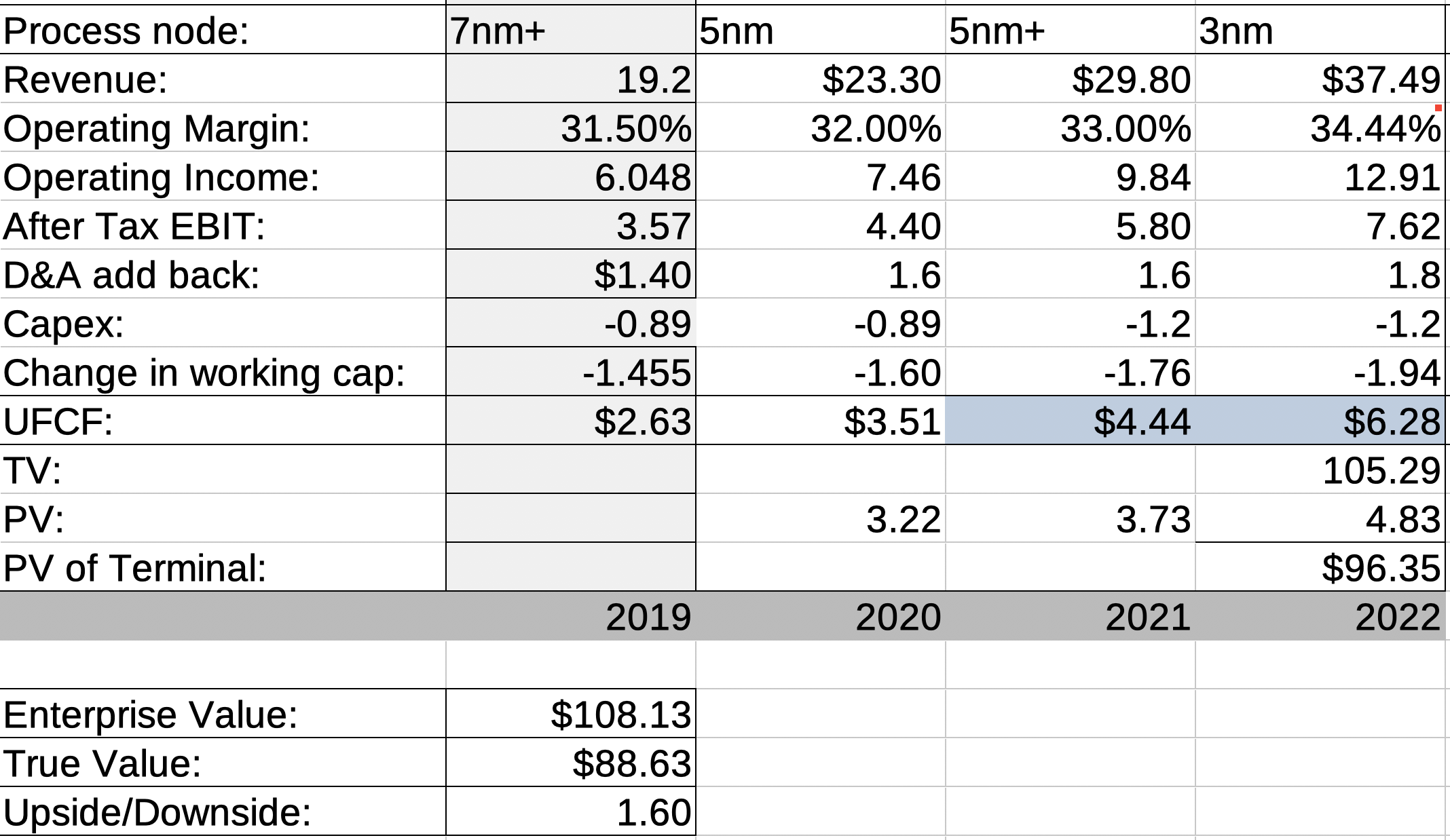 Enterprise Value in $ Billions, True value is per share.

5G iPhone launch could reverse downside to a $1.60/share upside - but only through scenarios rife with optimism

This optimistic model gives us an upside of $1.60/share for Qualcomm based on Friday's close. Revenues from the 5G iPhone are accounted for in Qualcomm's fiscal year 2021 which starts this October, even though the company expects to start recording them in the second half of this year (which would mean that the iPhone starts to make an impact on its balance sheet as soon as in 4Q of fiscal 2020).

Additionally, given Bank of America's estimate that Qualcomm stands to earn $4 billion from Apple by the end of fiscal 2022, it appears that the true value derived above might not be that far fetched as we're cautiously assuming. What strikes out the most is the value of the company's unlevered free cash flows which grow by nearly 3x by the end of 2022. This metric alone is a strong indicator of the sum benefit to Qualcomm from its partnership with Apple.

Disclaimer: This piece does not constitute investment advice. You are advised to conduct due dilligence and consult advisers prior to making any investment decisions. The writer does not own any Qualcomm shares and does not intend to acquire them in the near future.