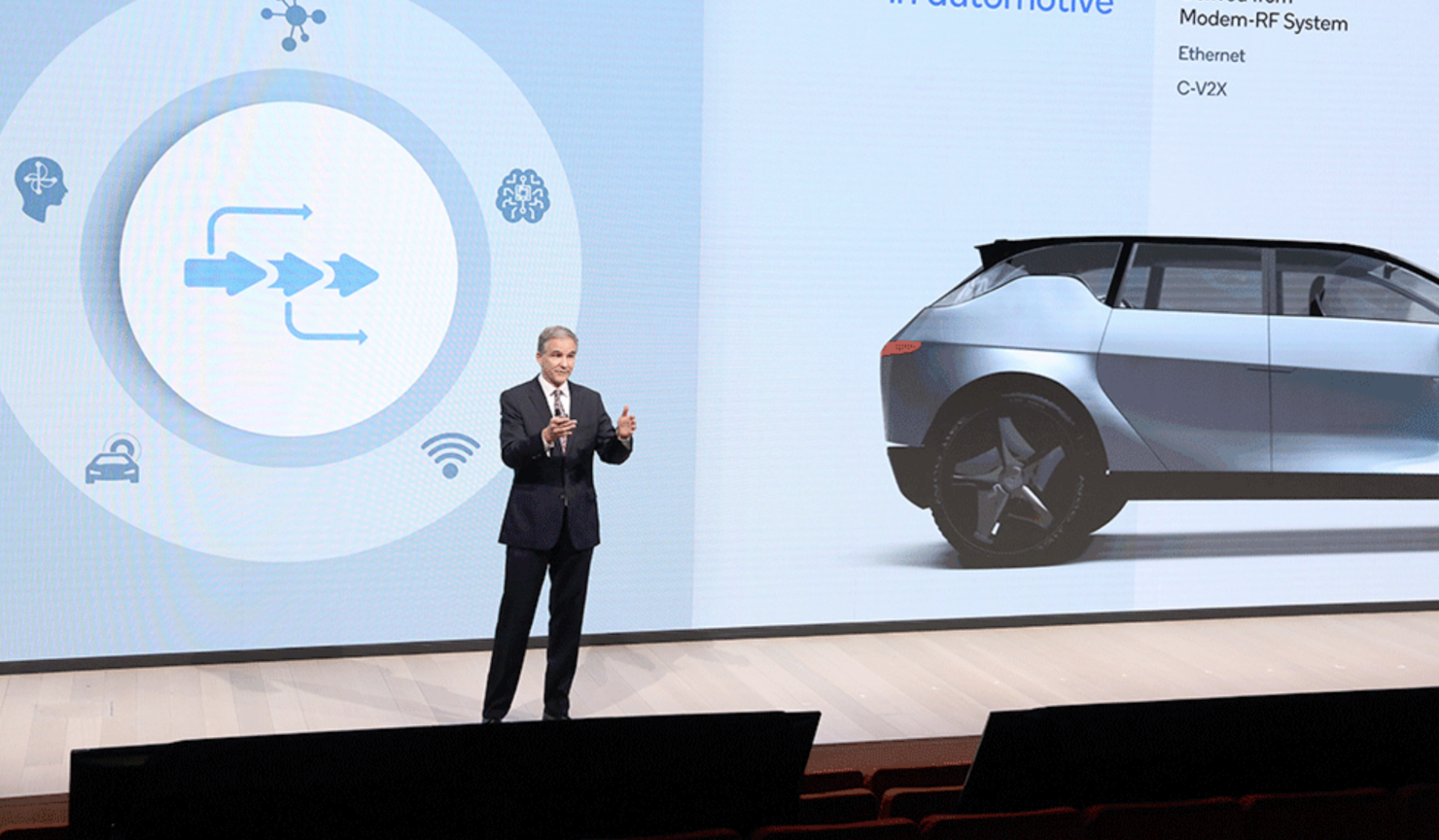 US chip giant Qualcomm is one of the biggest smartphone hardware vendors in the world. Qualcomm's processors and modems are used across all tiers of Android smartphones, from high-end, flagship-level gadgets to low-tier devices. And, if there's one thing that's for certain, it's that Qualcomm is at a crucial juncture right now. 5G is about to boom in the US over the next two years, as countries including China have officially introduced the network.

When Qualcomm announced its fourth-quarter and fiscal year 2019 earnings earlier this month, the company made two important claims for its future. Qualcomm was careful to mention a $4.7 billion settlement with Apple, and it forecasted cellular device shipments to increase by 3% next year, after falling down to 1.75 billion this year. The growth hypothizes on a 5G acceleration expected in the calendar year 2020. Out of the 1.8 billion cellular shipments the San Diego company hopes to make next year, approximately 225 million will be for 5G components.

Now, following the disclosures Qualcomm has made on its Analyst Day 2019, we can take a better look at what the company hopes is the outlook of the mobile market for the next two years. Qualcomm's market projections are based on realistic measurements as the company's licensing portfolio lets it keep track of smartphone manufacturers' projections.

The big shift in smartphones is Apple's decision to end its disputes wth Qualcomm and sign a licensing agreement for using the company's modem technology on the iPhone. This agreement lets us estimate just how many iPhones the Cupertino tech giant might be able to ship in the near future; a future for which carriers are busy preparing through 5G deployment.

Following its earlier earnings release, Qualcomm (NASDAQ:QCOM) has released some crucial numbers today after choosing to focus mainly on 5G growth at today's analyst day. The chipmaker hopes to profit not only from shipping smartphones with the latest cellular network but through cross-licensing, it will target sectors including the internet of things, automobiles and drones.

Still, while non-smartphone 5G devices will prove important in increasing the network's adoption, smartphones are nevertheless expected to provide the backbone of this growth. After all, connecting your drone and mobile to a 5G network provides for a holistic experience as opposed to isolated connectivity for the former. 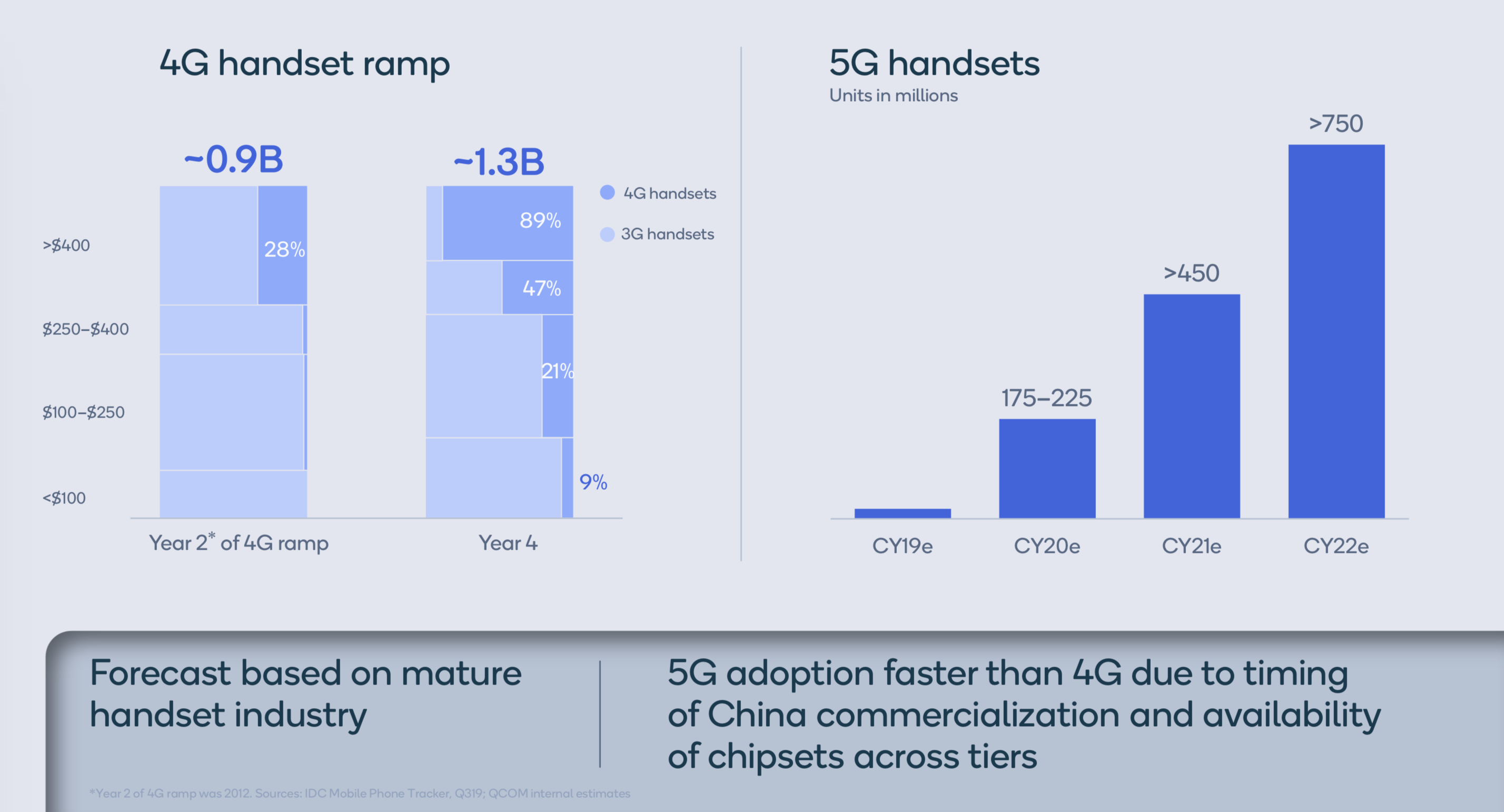 Qualcomm expects 5G handset shipments to grow to 750 million by 2022,.

Qualcomm has identified a $100 billion serviceable addressable opportunity (SAM) for the year 2022, and of this, $35 billion will be courtesy of the company's 3G, 4G and 5G core chipsets for smartphones. An additional $18 billion will be catered by Qualcomm's Radio Front-end modules for cellular networks. For the next three years, Qualcomm expects core chipsets to grow at a 10% compound annual growth rate and RF front-end modules to grow by a 12% compound annual growth rate. To that end, Qualcomm has projected 750 million 5G handset shipments in 2022, and these are driven by the 5G boom in China.

Qualcomm's basing its estimates on its diverse patent portfolio that covers key technologies ranging from dynamic antenna tuning, beamforming, systems architecture to mission-critical design and high precision positioning. Crucially, the company has confirmed that it expects three tiers of its Snapdragon processors to support 5G next year. These will be the Snapdragon 800, 700 and 600 series, and readers are reminded that currently, only the Snapdragon 855 is capable of supporting Qualcomm's Snapdragon X55 standalone 5G modem. The X50 is designed to work with both 4G and 5G networks, and automatically decide which platform to use based on signal strength.

Qualcomm's licensing arm, Qualcomm Technologies (NASDAQ:QCOM) has signed more than 75 5G licensing agreements to date, and the company expects that these will earn it between $2.3 billion - $2.7 billion revenue in the first half of next year. Qualcomm CDMA Technologies' serviceable addressable opportunity will grow at a 10% compound annual growth rate for the years 2020, 2021 and 2022. Qualcomm Technology Licensing is targetting a 70% operating margin for this time period. 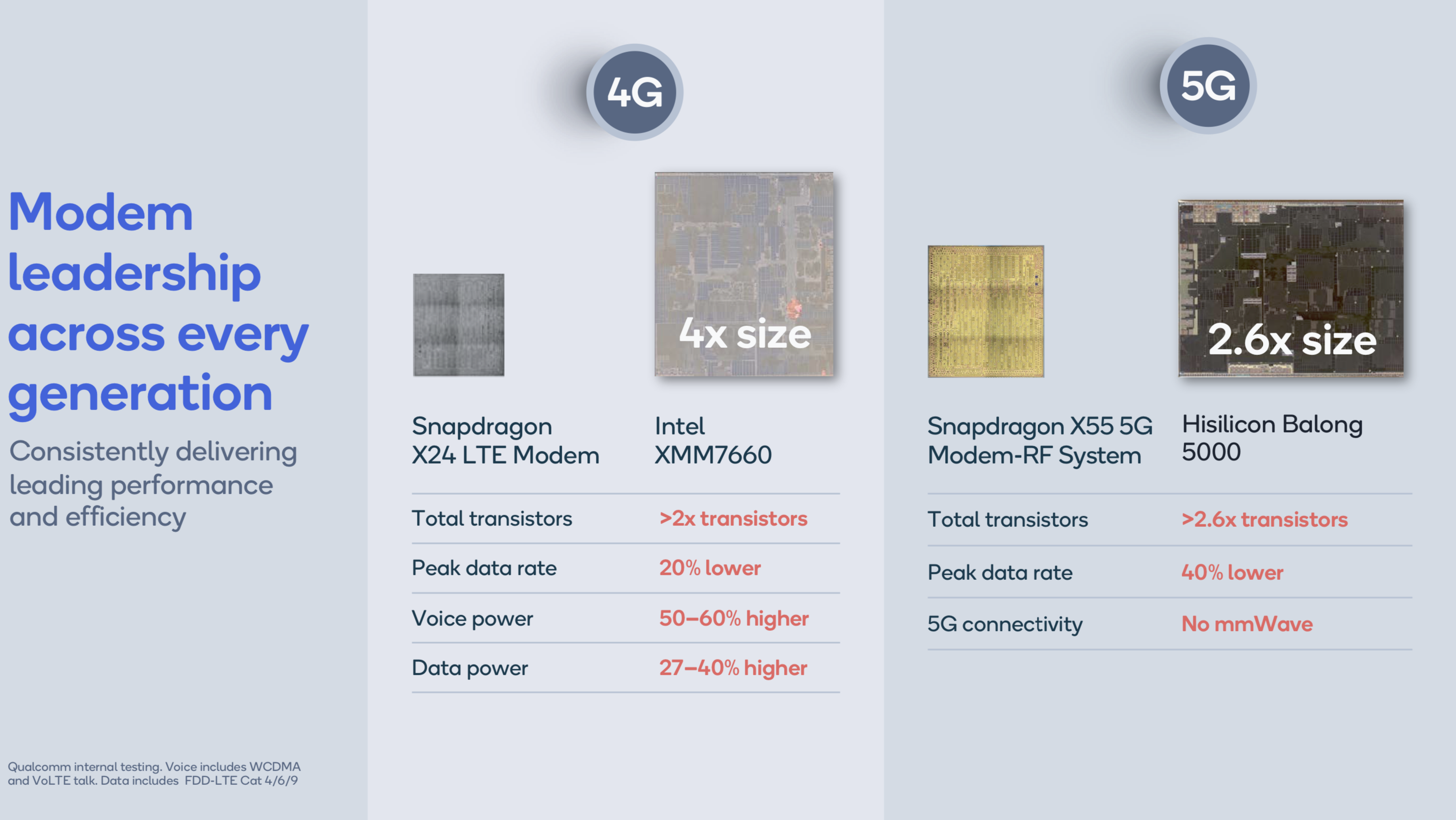 As we've highlighted above, Qualcomm is counting on China to help it reach 750 million 5G handset shipments in 2022. Right now, Huawei is the king in the Chinese smartphone market, after it shipped 41.5 million smartphones in the country in 2019's third-quarter. This number should grow given that Huawei brings in-house 5G solutions to the table. Qualcomm, it looks like, is fully cognizant of this reality as the company's vice-president engineering and chief technology officer Dr. James Thompson highlighted today.

Qualcomm (NASDAQ:QCOM) states that the Snapdragon X55 5G modem has 2.6 times fewer transistors than Huawei's Balong 5000, delivers a 40% higher peak data rate alongside and supports mmWave connectivity which the Balong 5000 does not. At this point, it's important to note that Qualcomm has not compared the Snapdragon X55 to Samsung's Exynos 5100, which is similar to the Snapdragon X50 in terms of die size.

If you look at products today that are in 4G you can compare. What I've got here is a picture of the Snapdragon X24 and the Intel Modem XMM7660, and if you look at the size of our competing product, it's quite large, up to four [times] larger. Now the process nodes are different so our estimate is that they use twice as many transistors to produce a product that actually has a lower spec. Its 20% lower spec from a throughput point of view. Not only that but at their peak rate at 16 layers, and we put ours at 16 layers, then they end up in a kind of depends, there's probably a 100 different measurements that we make, but you can think of it as 10 to 20% less throughput on top of the lower spec.

Qualcomm's estimated 750 million 5G shipments in 2022 let us perform some back-of-the-envelope calculations that provide a scenario of what to expect in the global smartphone market three years from now. The numbers suggest that Samsung is set to ship 201 million devices in 2022, with Apple following it with 119 million shipments. Our estimate excludes Huawei, who we've assumed will continue to use its in-house 5G modems for the future.

While Qualcomm (NASDAQ:QCOM) did not include the Exynos 5100 in its modem comparisons, you should not take this omission to insinuate any lack of competency from the company's end. Samsung's Galaxy S10 5G, one of the first 5G-enabled smartphones in the market, uses three of Qualcomm's QTM052 mmWave antenna modules, instead of Samsung's products. The three antennas ensure that mmWave signals are not blocked by the user's holding pattern(s). Qualcomm's taken the lead with 5G and its products are featured not only on the Galaxy S10 but also on the OnePlus 7 Pro 5G, Oppo Reno 5G and LG V50 ThinQ 5G.

All in all, Qualcomm continues to be optimistic about the future, and this optimism comes at a time when the company's processor (MSM) business isn't doing so well. The company expects system-on-chip shipments to drop by 176 million - 196 million units this year, on the back of a global slowdown and Huawei's rise in China,

Qualcomm Inc closed at $87.94 today, down 2.81% over yesterday's close. Trading volume remained stable at 1.5 times average daily, and the stock price is 6.48% short of its 52-week high. Qualcomm has a 21x price-to-earnings multiple, which signals great times ahead for the company.

Thoughts? Let us know what you think in the comments section below and stay tuned. We'll keep you updated on the latest. And as always, keep in mind that this piece does not constitute investment advice. The author has no stake in Qualcomm to the best of his knowledge and he does not intend to acquire one within 72 hours.