PlayStation Europe just tweeted that update 3.10 for the PS4 is intended to go live later today. Theoretically you should be queued to download it automatically, but it doesn't hurt to check manually just to be sure.

Update 3.10 is mostly stability related, but adds some new stickers for messaging your friends with.

Even though it's only been around a month since some large changes and improved functionality were added to the PS4's UI, update 3.10 follows hot it's heels by improving stability for those that had trouble with the previous large update. More functionality will be announced later today, though apparently the largest change is the introduction of a few new stickers so that you may better communicate visually with your friends.

Update 3.00 was evolutionary in how it added a social aspect to the PS4 that was decidedly lacking compared to the competition, and even the Wii U. It gave us the ability to snap screenshots and save them as PNG's, increased the online storage available to PS Plus members, allows for the creation of communities around shared-interests and quite a bit more. 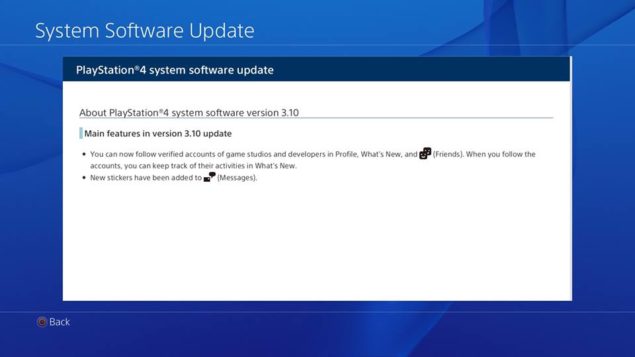