Playtonic Games, is a fairly a new development studio formed by some of the creative talent behind the renowned and beloved platform-adventure games such as Banjo-Kazooie and Donkey Kong Country, and yesterday they revealed the first details about their debut game Project Ukulele, which is a spiritual successor to Banjo-Kazooie. 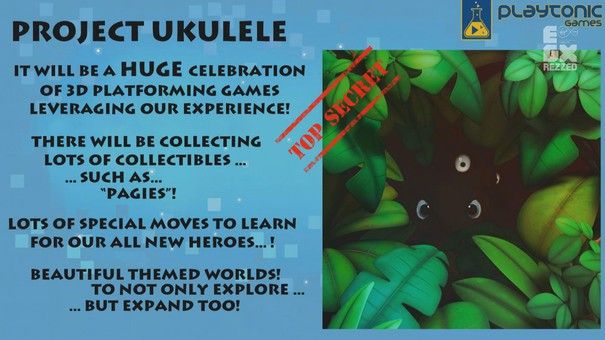 Project Ukulele, is a brand new 3D platforming adventure, that has been conceptualized as a spiritual successor to the team’s (former Rare employees) most revered and successful releases of the past, with stunning worlds to explore, unique collectibles to uncover, fun moves to learn and hilarious characters to meet – or defeat.

During EGX Rezzed the Playtonic team pledged to recapture the spirit and essence of their previous games, while still enforcing their reputation for innovative, fun gameplay with game worlds "that players not only explore, but also expand and unlock in a totally free-form structure." Playtonic released two work in progress in-engine screenshots which you can see below.

Playtonic announced that they would launch a Kickstarter in May this year for Project Ukulele, but they made sure to clarify that even if they didn't meet the funding goal (which would be really odd if they didn't) the game would still be right on track, the Kickstarter would allow them to expand the game, be it mechanics, new zones and such, and a way to hopefully give old fans some nice merchandise, as well as "ensuring the creative freedom required to make the game that fans want to play."

“Our team’s passion for our past games and the 3D platformer genre lead directly to the birth of Playtonic,” said Gavin Price, managing director and creative lead. “Through PROJECT UKULELE fans will finally get to see those pent-up ideas and passion become reality.

“Since the announcement of our studio the reaction from the community has been absolutely incredible. Through consultation with them we've decided to greatly expand the scope of our project with the launch of a Kickstarter program. By working together with fans we're confident we’ll be able to create a game that not matches their expectations, but one which hops, flips and soars above them.”

If I'm being completely honest here, my wallet is most definitely going to be thrown at the screen when the Kickstarter launches, and it's quite good and re-assuring to know that even if they don't meet the funding goal, the game will be made either way. So I'm going to assume that they already have one or two private investors lined up, which is quite good. Obviously if they manage to get an enormous amount from the Kickstarter, they might even be able to ditch one of the private investors, which translates to more creative freedom. I'm a huge fan of the old Banjo-Kazooie games and just Rare-games in general. So I will be keeping my eye on this.