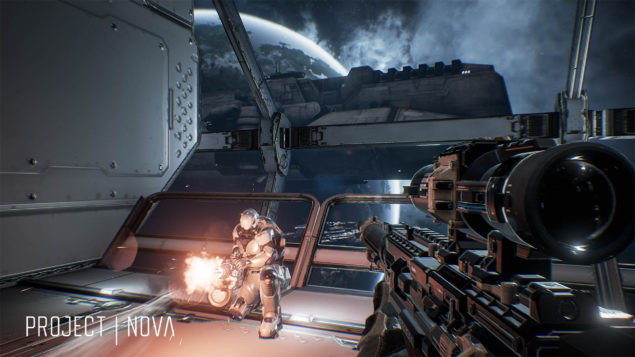 CCP Games held its annual EVE Fanfest today. As usual, there have been plenty of announcements: we have reported that EVE Valkyrie will feature crossplay between PSVR, Oculus Rift and HTC Vive, but the biggest news of the day is easily the reveal of Project Nova.

This game is being developed by CCP Shanghai, the same team responsible for the now defunct Dust 514, for the PC platform. Project Nova, however, has been presented as a 6vs6 competitive shooter which scales back the MMO ambitions in favor of a tighter combat experience; CCP also wants to focus more on fights inside ships and stations, though there will be some fighting on planets.

Even at its pre-alpha stage of development, Project Nova looks pretty good thanks to Epic's Unreal Engine 4. CCP is aiming for a minimum of 60FPS (though system requirements are unclear yet); the game features a loadout system with several predefined classes to choose from, but eventually players will be able to customize the equipment as they see fit.

It is unknown yet if the developer intends to fully integrate Project Nova into EVE Online, just like Dust514; there's a chance they might keep it separate like EVE: Valkyrie.

Stay tuned on Wccftech for more on this project and check out the first screenshots and footage below.