The world is moving forward so why have old printing methods right? It should be changed too because who needs conventional. We need something new. Scientists have come up with a new printing method that involves light and it is supposed to be cheaper and more environment friendly than the ink-based printing used traditionally.

A team of scientists from China and the US have developed a coating made from nanoparticles that changes color when UV rays are shined on it. The change can be reversed by heating the coating to approximately 120 degrees Celsius. Changes can be applied up to 80 times. According to the team this printing technique can be used for anything including newspapers and labels. It will save ink and paper costs and prevent environmental costs of recycling, disposal etc.

According to team member Yadong Yin from the University of California, Riverside, the special light-printable paper “has the same feel and appearance as conventional paper, but can be printed and erased repeatedly without the need for additional ink. Our work is believed to have enormous economic and environmental merits to modern society." The team seems to be pretty confident with their work.

So let’s dig a little deeper and see what this material is composed off. The coating is made from two types of nanoparticles, Prussian blue and Titanium dioxide. The former is basically a blue pigment and it is found in paints and on gaining electrons it becomes colorless. The latter is a photocatalytic material and as the name suggests, it speeds up chemical reactions when exposed to UV light. When these two substances are mixed together a solid blue coating forms. On exposure to UV light the activated Titanium dioxide particles release electrons that turn the Prussian blue colorless. This forms ‘prints’ in the blank parts of the page then. 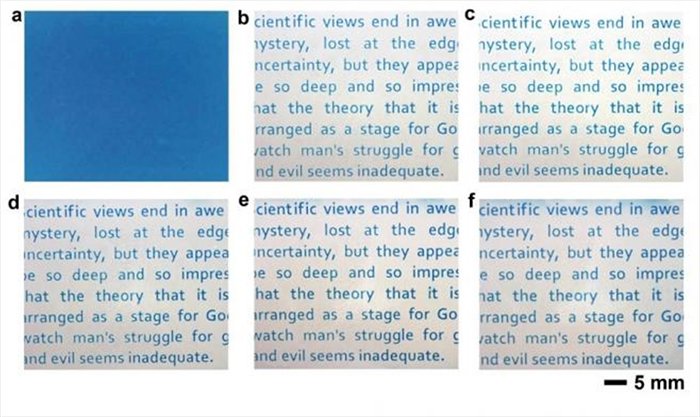 According to the team the print stays in place for around 5 days and then starts to fade to blue. The fading process can be quickened by applying heat. This sounds pretty exciting if you ask me. The team said that the coating can be applied to any paper by spraying or soaking and the technology will be cheap if produced on a commercial level. The added advantage is that each page can be used about 80 times! So imagine why it’s exciting. No need to buy papers again and again when you can use just one.

About 40% of the waste in the US is paper and 68 million trees are cut down to provide us with paper so you can see the benefit the environment will get from this. A similar prototype was introduced in December 2014 but it could only be used 20 times so here is a definite improvement. This latest version is more stable, cheaper and more straightforward than the previous version. So now they are looking towards making this new technique into a practical printing system. Yin said, “Our immediate next step is to construct a laser printer to work with this rewritable paper to enable fast printing. We will also look into effective methods for realizing full-color printing."

So here is to a new era of printing.