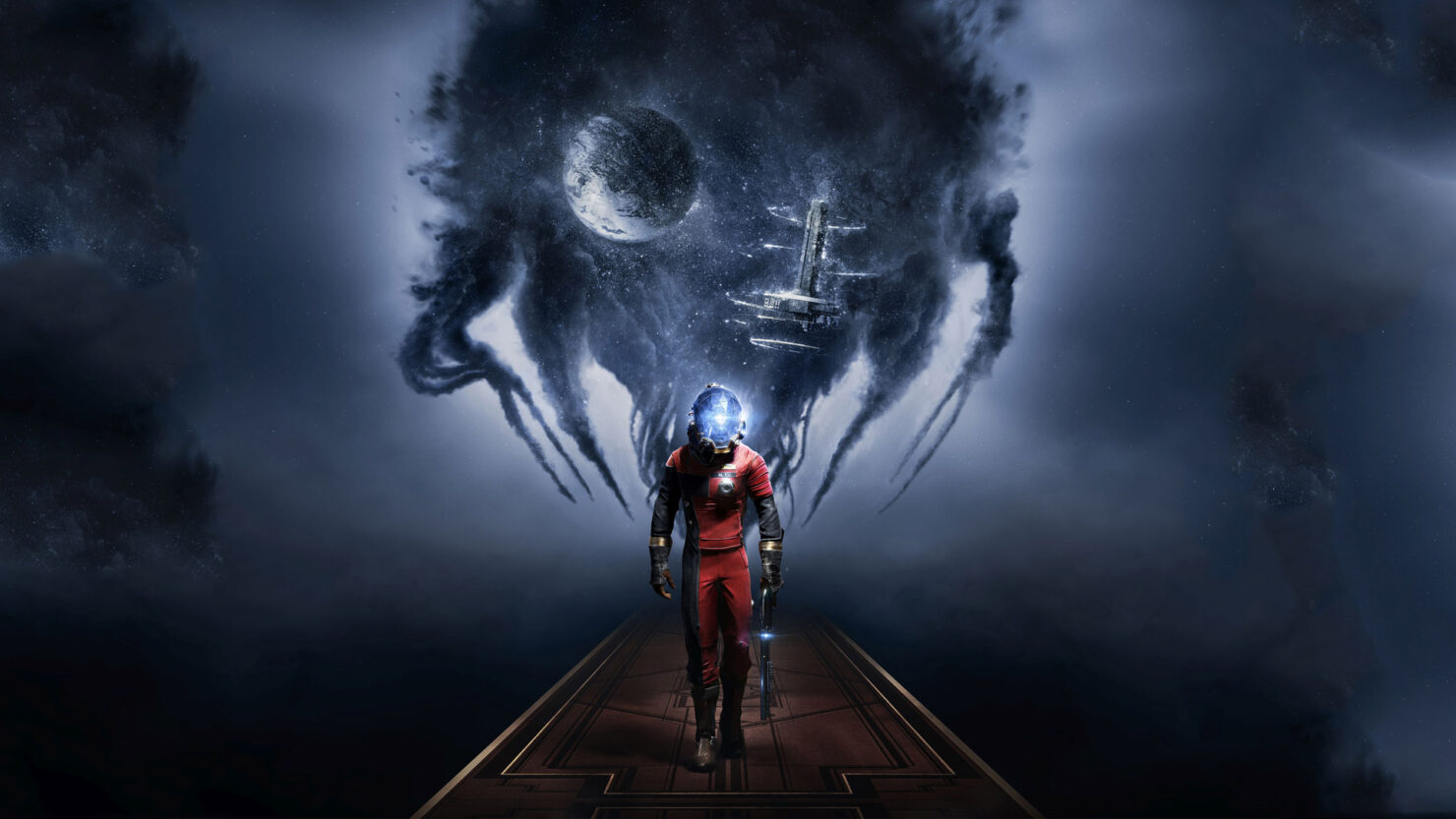 Has there been another game development cycle longer than the ones of both Prey games?  I personally have been waiting for a very long time for this game, even gave up at some point.  But, Prey has finally delivered.  Powered by the Cryengine we should expect a reasonably demanding game that should utilize as much resources as you can throw at it.  That's what we're here today to find out, how does it perform on PC. 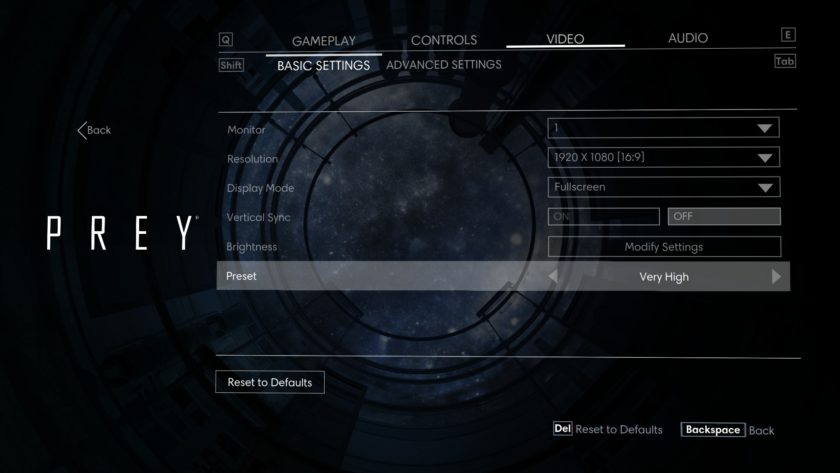 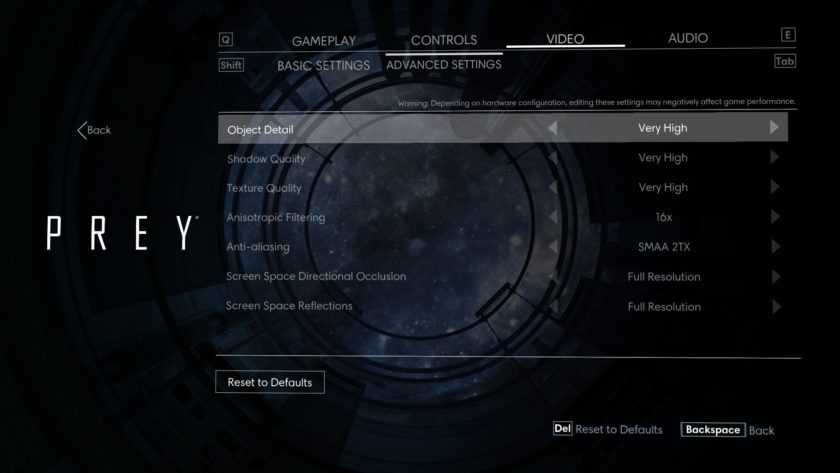 Above were the settings used to test this game.  Long and short of the settings story we maxed the game out on every [very few mind you] setting available to us. Since the game doesn't feature a built in benchmark utility we had to set a course to test the game on that we could accurately repeat time and time again. We got about 30 or so minutes into the game when we reached the lobby on Talos 1 and found it to be a good place to test.  Our run lasts for 45 seconds coming down the main staircase and moving through the museum area and back into the lobby towards the opposite side.  Since a lot of the game is in tighter spaces we wanted to find an area that mixed open and closed areas as well as many light sources together for good representation of what the game played like.  Using FRAPS to record the output frames then FRAFS Bench Viewer to analyse the AVG FPS, 1% Lows, and .1% Lows we were able to bring you these results.

On 5/10/2017 GeForce released hotfix 382.19 to address the stuttering found on some configurations, including our results. So at this point we retested our GeForce cards and placed them in additional graphs here rather than a new article so that you can see before and after showing what improvements drivers can make when there's a problem. 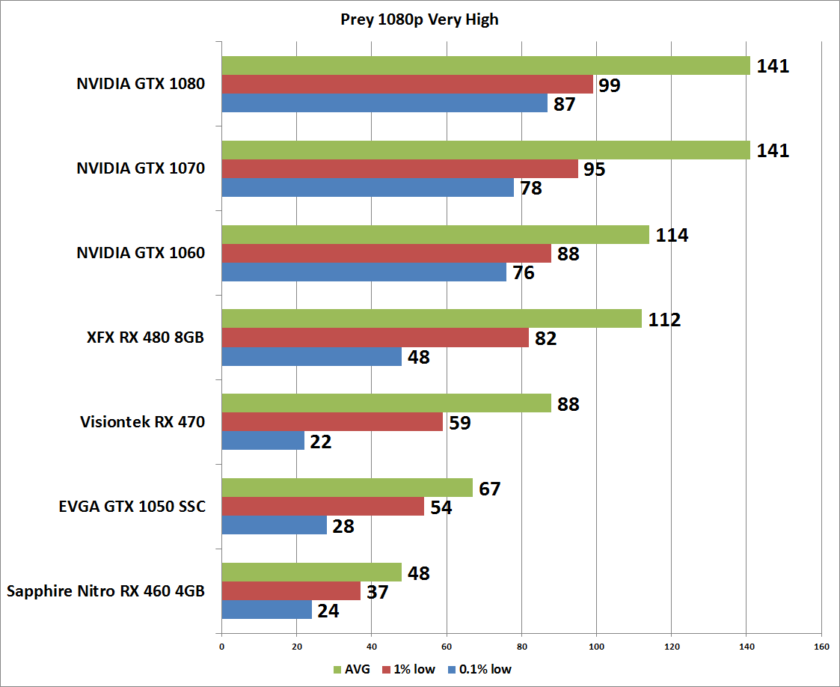 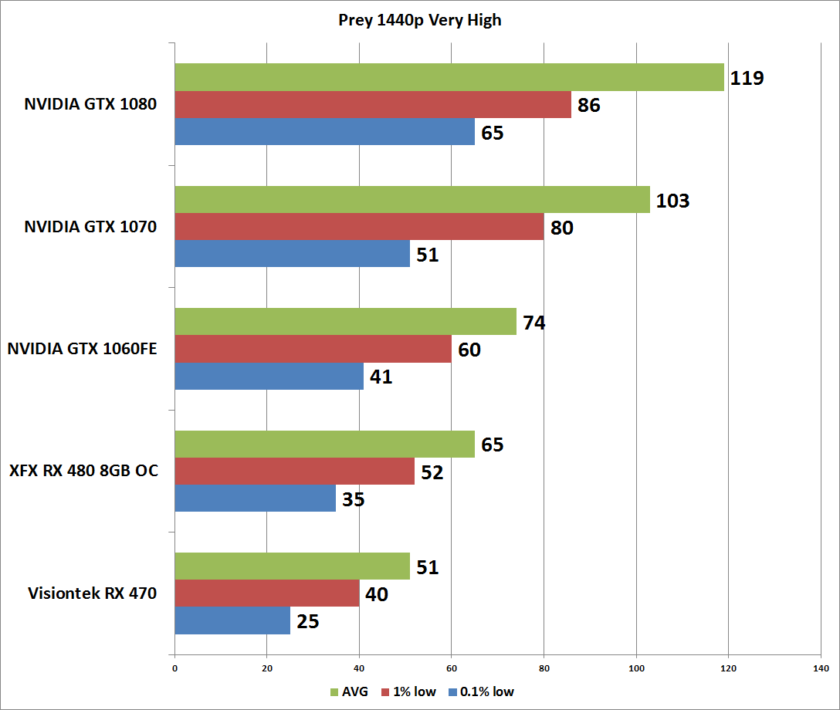 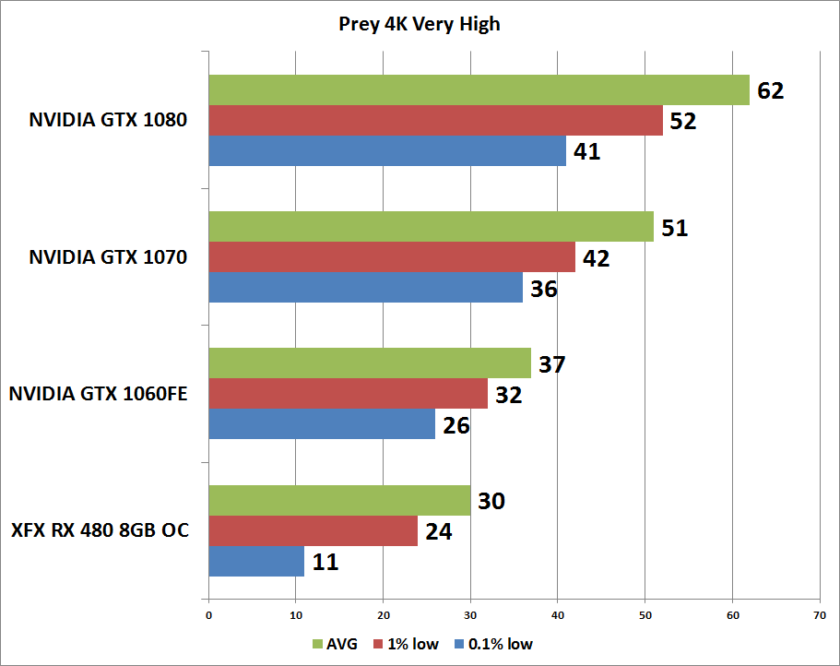 The shift in performance from the new drivers should help out GeForce owners everywhere to enjoy this game much more.  The GTX 1060 raced ahead of the RX 480 with the hotfix drivers and all cards see massive improvements.  Gaming all morning after the update using the GTX 980ti has been butter smooth with no noticeable hiccups paired with the Ryzen 7 1800x in our workstation PC. These are definitely good results and reiterate my assumption that any of the issues we saw in our initial testing would be fixed in the next driver.

*Below are initial results and impressions at launch*

It didn't take us long to find the game's frame rate cap of 144 fps, but unless you're running a 200+hz monitor I think you'll be okay.  What we did find was some pretty unusual stutter that was very noticeable on GeForce cards, mainly because of their high AVG FPS, we do cover this in more detail down below.  Something I must point out is the strange high performance of the GTX 1050, this one is getting written off due to the VRAM limitation and the way the game handles it.  The game reduces textures and assets when not enough VRAM is present, so while the GTX 1050 gives out great numbers for it's class and wipes the floor with the 460 it simply isn't pretty to see at all, reminds me of the original PREY in all honesty.  While the RX 480 is trailing the GTX 1060 in averages it completely takes the overall crown here with the highest 1% and .1% lows resulting the smoothest overall gameplay experience. 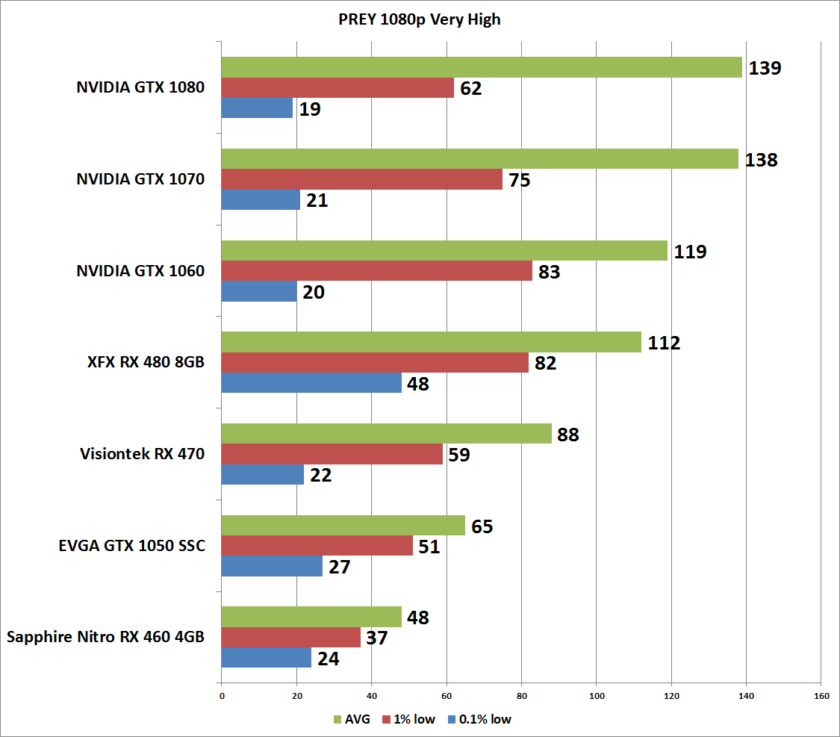 For 1440p testing we completely dropped the RX 460 and GTX 1050 and recommend you bring more power to this level.  Here we see evidence of the same stutter the GeForce cards had at 1080p indicating that it wasn't a CPU bottleneck, that would have been relieved by moving to high resolutions and placing more strain on the GPU.  We do however see that even the RX 480 is able to deliver a solid performance at this resolution and once the stutter is sorted out the GeForce cards will deliver excellent class performance here. 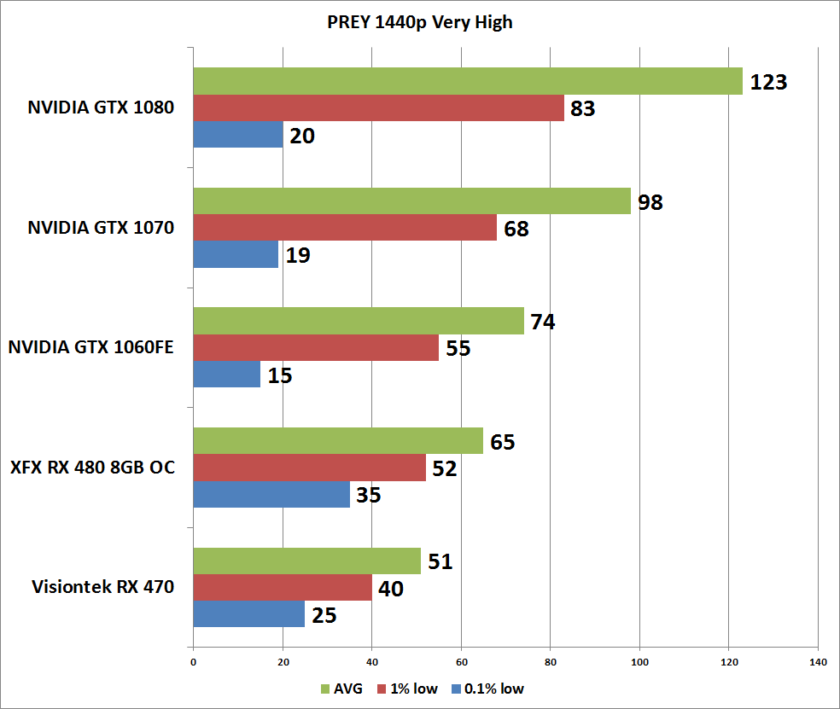 Once the stutter issue is resolved at 4K you can very much look at this being playable with the GTX 1070 or GTX 1080 with just a couple settings, mainly AA, turned down and be a very enjoyable experience.  For what it's worth the GTX 1060 and RX 480 deliver similar FPS to the console version at over 4x the resolution and much higher detail settings, so there's some kudos to those cards holding their own in this game. 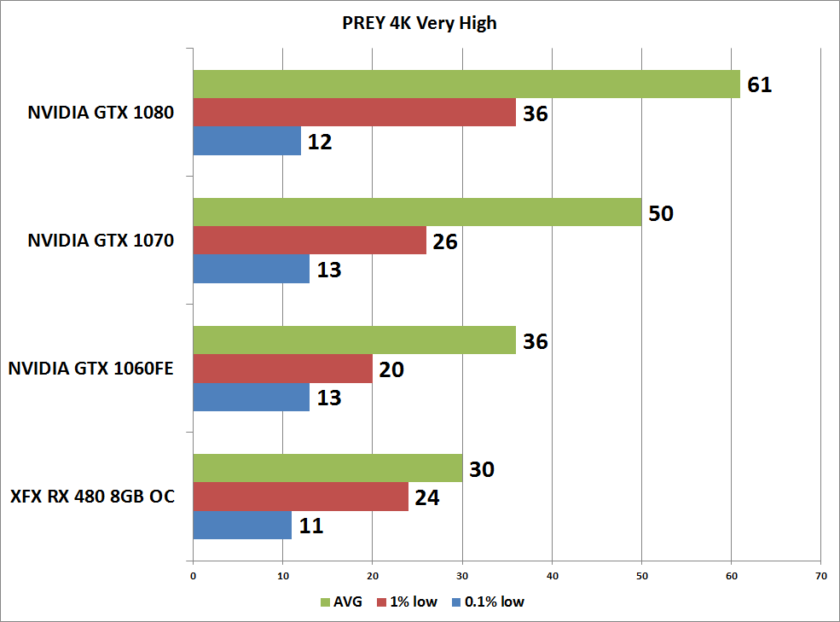 We wanted to see how well Ryzen performed with this game and since it's an AMD title we wouldn't be doing you as a reader any service by ignoring it and not delivering.  We ran all the same testing routines as before but this time with the RX 480 8GB and the GTX 1080 to show both Radeon and GeForce performance with the Ryzen 1800x at 4.0GHz. 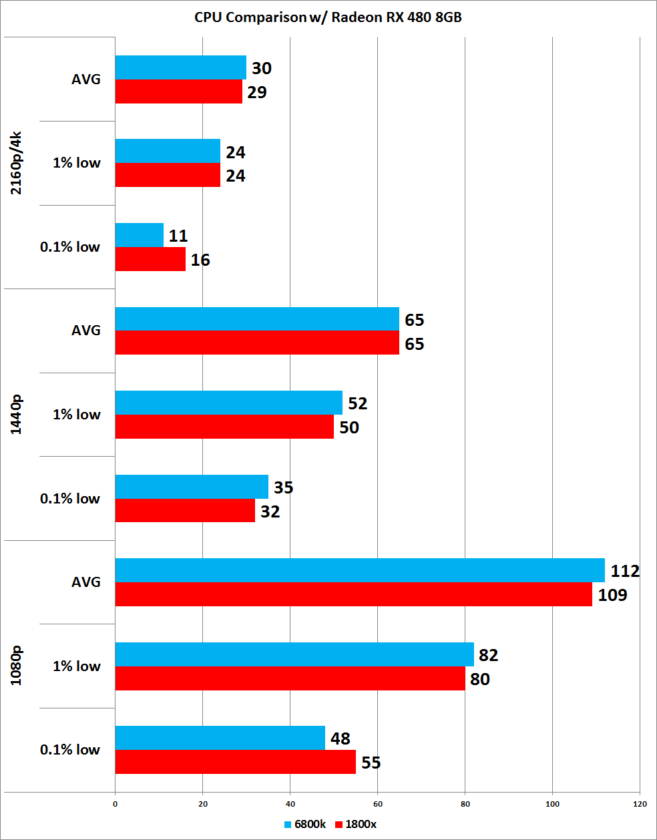 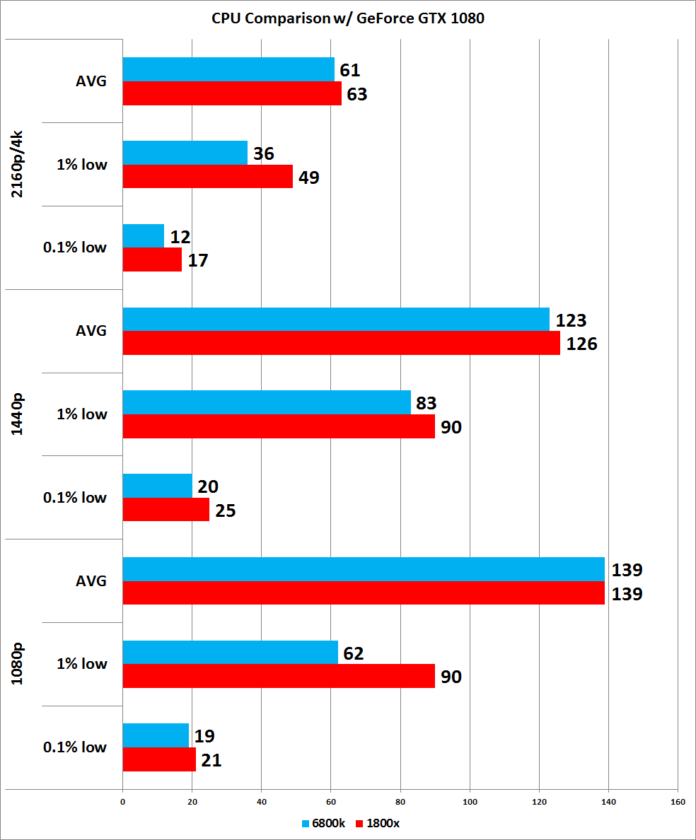 *UPDATE*  This issue has been resolved through the latest hotfix

Time to talk about the stutter, and not the song here. In my initial testing I noticed the stutter, it reminded me of what micro-stutter looked like back on the Crossfire HD 6870s and the SLI GTX 260s.  It's noticeable but strange.  I reached out to another staff member who is playing the game for review purposes on his GTX 1080 and i7 6700k combo to see if he had the same problem, he did.  But it wasn't always present.  He recommended that I try the previous drivers because he found them to be smoother.  Below is the driver number and comparison with the GeForce GTX 1060 at 1440p using both drivers, and he was right, gone was the stutter.  It performed objectively worst on averages and the plotting chart wasn't nearly consistent as with the game ready drivers, but the stutter wasn't present making the overall experience much more enjoyable. 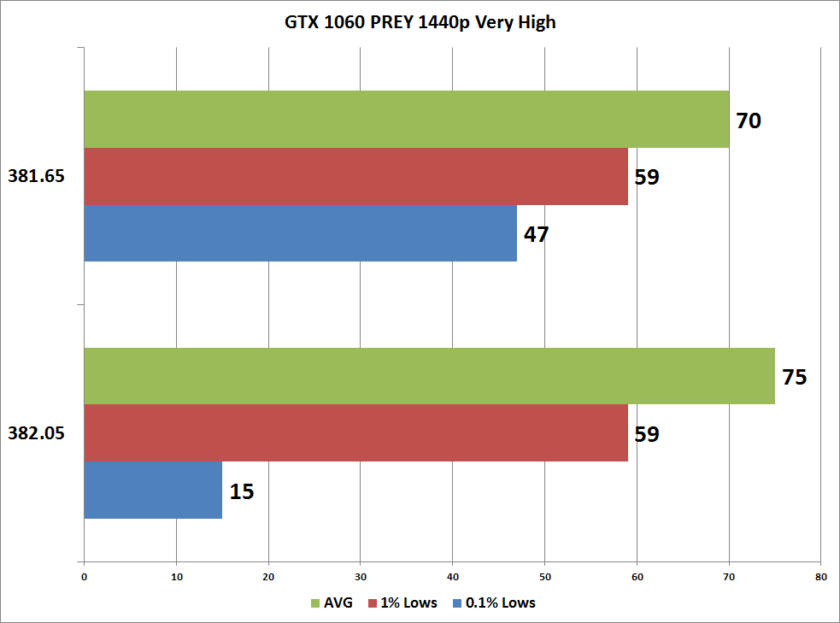 At the end of it all the new Prey game runs great across a wide gamut of hardware, just a few tweaks should be all it takes to run is absolutely melted butter smooth.  Curiously enough with current drivers the RX 480 8GB walks away with the best overall experience, but GeForce gamer's not fret, I'm quite confident that there will be a driver coming with the swiftness from NVIDIA.  We reached out to their team as soon as we found this and sent them our results, they're testing internally already to root this one out.  Much like when DOOM launched and the R9 390 was suffering horribly and we retested when improved drivers came along you can bet we'll be doing the same here.  Prey, is a solid game with great visuals, and thanks to the performance change we saw by switching drivers I can confidently say that once those are updated this game will be running splendidly for everyone, even at higher detail settings.