Predator: Hunting Grounds Interview – Why the ‘87 Movie is Best, Everything Earnable in Game 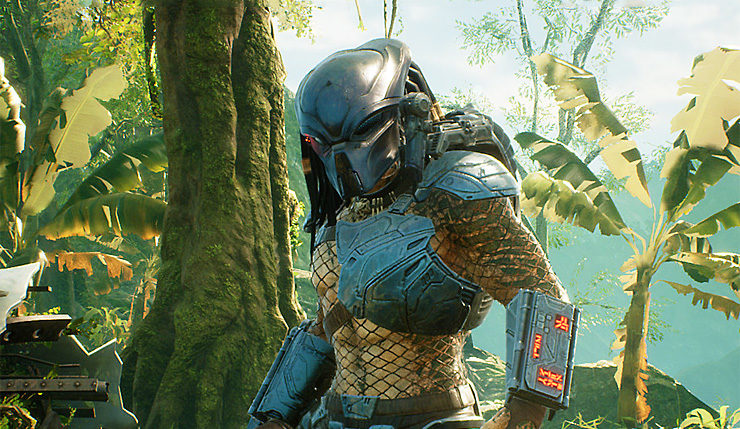 It’s been too long since we got a decent Predator game, but the dry spell may be almost over. IllFonic (Friday the 13th: The Game) is hard at work on Predator: Hunting Grounds, an 4v1 asymmetric multiplayer experience heavily inspired by the classic 1987 Arnold Schwarzenegger movie. The PS4 exclusive combines multiple playstyles (first-person for the Fire Team marines and third-person for the Predator) and generally looks quite promising, but then, the same has been said about Predator games in the past.

At the Reboot Develop Red conference in Banff, Alberta, I got a chance to sit down with IllFonic studio art director Tramell Ray Isaac to talk Hunting Grounds. Isaac has an impressive resume, having worked on classic RPGs like Fallout (he’s the co-creator of Vault Boy) and Neverwinter Nights 2, before moving on to games like PlanetSide 2 and Lawbreakers. We discuss how he’s bringing that experience to Hunting Grounds, the game’s customization options, why the original ’87 Predator still kicks ass, and more… 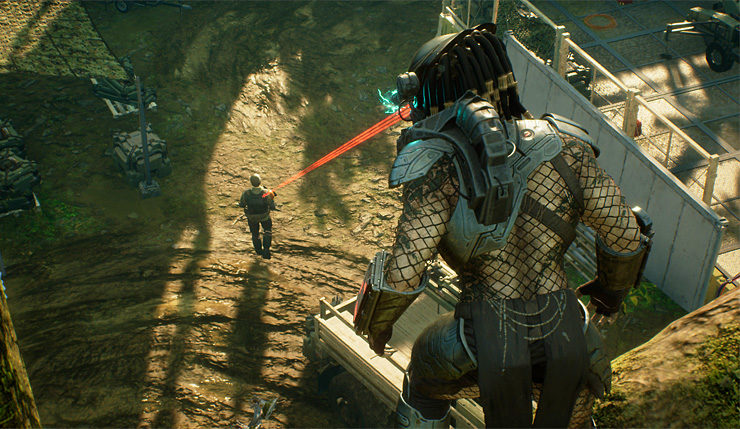 You’ve worked on a wide range of different games over your career, from Fallout to something like PlanetSide 2. How’s the process of working on a title like Predator: Hunting Grounds different than, say, working on an RPG?

My last game, Lawbreakers, was an action-packed game. As you mentioned, prior to that was Planetside 2. So, it's not really a big departure. RPGs are kind of where I cut my teeth though. Predator: Hunting Grounds is a little bit different, because we're doing different points of view. We've got the first-person point of view with the Fire Team and the third-person point of view for the Predator. So, that's a bit different, but not so much of a departure that it changes the way I think about making games.

Given your history, are you looking to add more personality to the IllFonic formula with Hunting Grounds? There wasn’t much to latch onto in terms of characters in Friday the 13th.

Well, Friday the 13th was all about Jason. With Predator: Hunting Grounds you get to be on both the offensive and defensive, with the Fire Team as well as the Predator. It's not so much a one-sided affair, where you just want to be the Predator. I don't think it necessarily needs a lot of character-building. It's more about the action, the tension, and claustrophobic nature of being in the jungle. 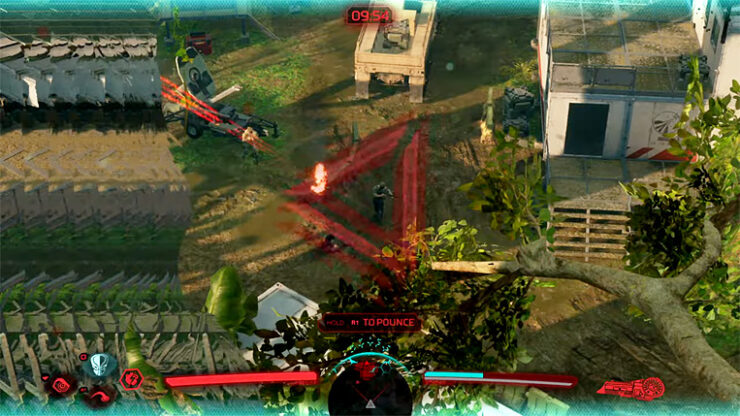 How will the game’s missions play out? How in-depth will they be?

As the Fire Team, you'll come into the space with a couple of objectives, some major and some minor. As a player it's up to you to decide if you want to do those missions. You can not do them at all and just hunt the Predator and get to the chopper if that's what you want to do. All of it's optional, but you'll have a wide variety of mission types.

Hunting Grounds is obviously very inspired by the original Predator from ‘87 – why do you think that movie holds up so well? And what did some of the not-so-beloved sequels do wrong?

I had to do this breakdown myself in my mind, and I think what makes '87 stand out is that group of individuals who were well-trained and knew each other. In [The Predator], you had a bunch of people who were put together in a situation and had to overcome it. The movie before that, Predators, it was the same thing -- a group of people thrown together. So, you don't have the same kind of attachment to the characters than in the first movie.

The camaraderie isn’t there. Everyone sniping at each other gets a little annoying.

Exactly, when you had a person on the team die, you had some backstory -- the team has been through so many missions together. They're tight, their families are tight, whatever. You feel some sort of way when they're offed by the Predator. You've gotta get revenge because that was your boy, and that kind of stuff. Same kind of thing in Predator 2, but they subsequently got away from it. We kind of try to recreate that feeling between players in Predator: Hunting Grounds. 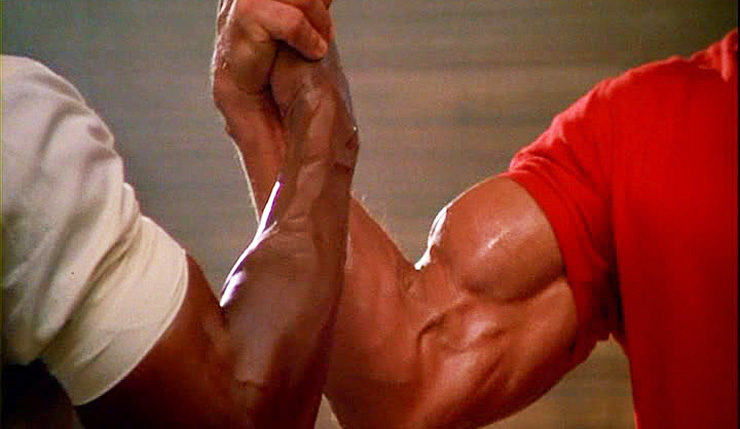 Just how manly is this game going to be? Can you do Arnold and Carl Weathers’ bicep-flex handshake?

[Laughs] I wish we could. How manly is it? Uh…it's a game for everybody. We've got the action, and obviously the gore, and dialed it up so it's on par with what the movie portrays. But still, it's a game everybody can enjoy.

How extensive will the game’s character customization be?

You'll be able to customize your characters, as well as the Predator. We'll have a whole host of things you can choose from.

And how will you gain customization items? Will any of it have to be purchased with real money?

You'll be able to earn everything in game.

So, you can customize your character, but will we maybe get a chance to play as favorites from the movies? I realize you probably can’t get Arnold, but what’s Jesse Ventura doing these days?

[Laughs] Well, right now we're just focusing on our characters we have in the game, and trying to make them memorable. 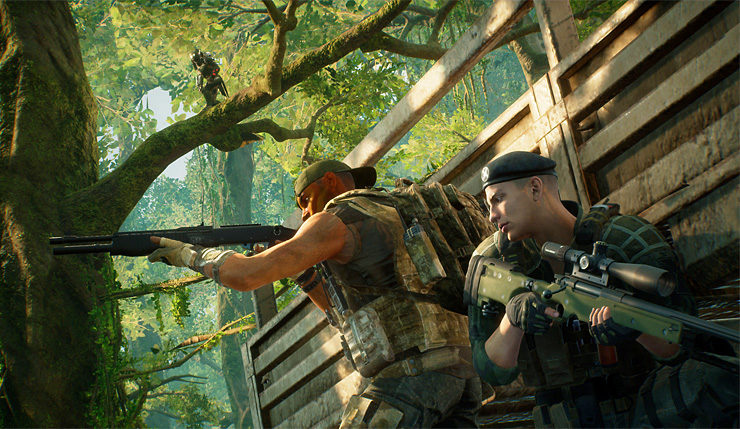 Can you tell me a bit more about those characters?

Well, it’s more different classes. So, each class have different armor types and movement speeds. We've got Scout, Recon, Support, which a heavier class, perhaps harkening back to Jesse Ventura, and Assault, which is your rounded mid-tier character.

Friday the 13th was packed with Easter Eggs from the series. Will Hunting Grounds also include a lot of treats for Predator fans?

It's possible. I don't want to give anything away.

What engine is Hunting Grounds running on? What kind of tech are you using to make that jungle as lush as possible?

We're using Unreal 4...I believe we're on version 4.2 right now. We're not doing massive open worlds, but the maps are pretty big and Unreal has provided the tools and support for us to get decent framerates. We've been able to get that lush feel in the jungle. You don't feel like you're running through corridors, it feels like this huge jungle.

You say you’re working on performance – what kind of framerate are you targeting?

We're still testing to make sure we can get a decent framerate. We haven't really set any targets.

Could Hunting Grounds end up on platforms other than PS4 in the future?

Right now we're focused on the PS4 and making it the best we can possibly make it on that platform.

When can we expect the game to drop?

Darn those Ps and Qs! Thank you for taking the time to chat.

As mentioned, Predator: Hunting Grounds stalks onto PS4 in 2020. Who out there’s excited for this rumble in the jungle?

The PlayStation 5 Launch Is Sony’s Biggest Console Launch Ever