Pokémon Go Has Generated $1.8bn in Revenue in Two Years

As revealed by intelligence firm SensorTower, Pokémon Go has generated an average of $2 million per day. This has led to the game bringing in an astonishing $1.8 billion by the second anniversary of the game's launch. This is a large increase on the $1bn gained by January 2017. While this does show a slowdown in revenue earned, the game is still going strong.

To this day Pokémon Go features within the top ten highest grossing apps on the iOS app store in over twenty countries worldwide. Nintendo (TYO:7974), the owners of the Pokémon IP, also revealed in May that the game has hit 800 million downloads.

Pokémon Go - Breaking Down the Figures

Figures have revealed that Google Play acts as the largest platform for the game, generating 58% of revenue. iOS brings in the remaining 42%. This, of course, proves as a boon for both Google (NASDAQ:GOOGL) and Apple (NASDAQ:AAPL), who retain a percentage of all purchases on their respective stores.

Breaking down player spending by country also highlights a huge gulf between countries. The United States has brought in over 30%, $607 million to be precise. Japan acts as a close second generating a little under 30% at $500m. The other three highest spending countries are Germany, Great Britain and Taiwan. 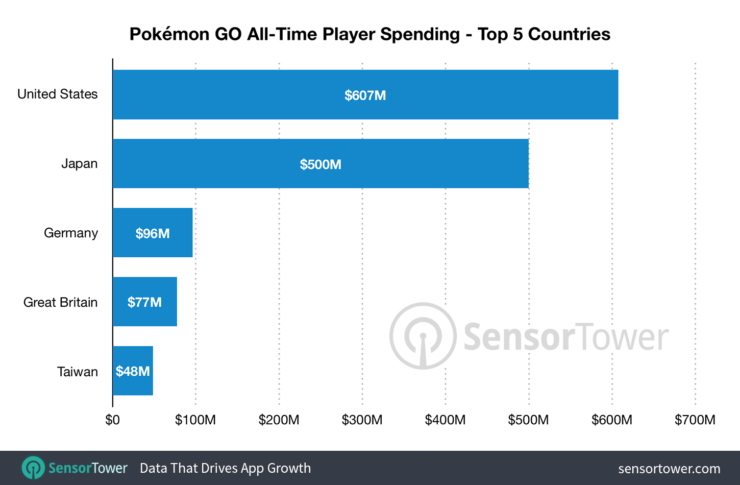 Niantic & Nintendo - Catching Them All

One thing is certain, Pokémon go is seeing an uptick in both users and revenue. Even more important is the planned rollout of the game in China. Backed by NetEase (NASDAQ:NTES), it will open up the title to an audience of hundreds of millions of people. China is also the biggest market for revenue generated by mobile titles.

What has helped reinvigorate the game is the number of upgrades and expansion made by Niantic. Recently, the ability to add friends, trade Pokémon and gift items has been added to the game. In addition to this, there are a number of seasonal, community and special events that act as methods of keeping players interested and returning to the game.

Niantic has also made the decision to begin licensing out their augmented reality platform to other developers. Should others take advantage of this, the popularity of augmented reality titles and the prominence they have on the mobile market could extend well beyond that of Pokémon Go and act as an even larger boon for Niantic.