Both Sony and Microsoft highlighted multiple times how the PlayStation 5 and Xbox Scarlett will reduce load times a lot. We still don't know much about how this is actually going to be accomplished, but it seems like Samsung is working with the console manufacturers to achieve this.

At the recent Samsung SSD Forum 2019 held in Tokyo, as reported by PC Watch, Senior Managing Director, Product Planning Team, Memory Electronics Division Han Jinman spoke about the company's storage solutions. At one point, gaming SSD has been mentioned, with the accompanying slide making it clear how optimized NVMe SSD will reduce both system booting times and loading times, confirming that they will be installed in both the PlayStation 5 and Xbox One Scarlett. 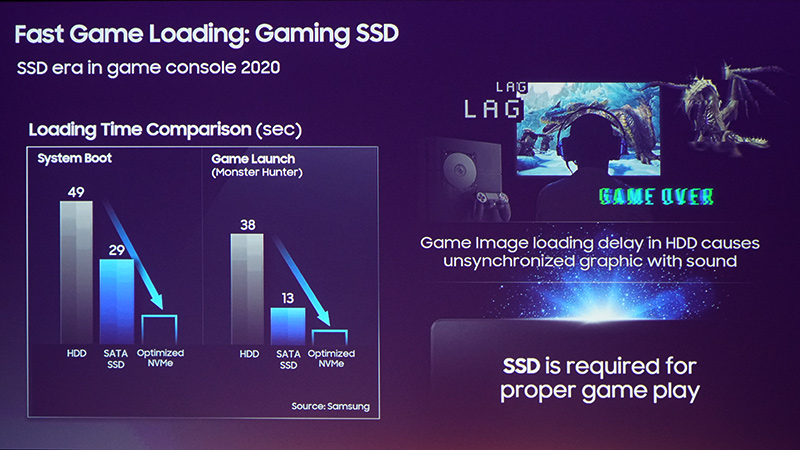 In addition, he introduced that SSDs are being deployed in the gaming field for consumers, and explained that in 2020, NVMe SSD will be installed not only on PCs but also on consumer game consoles. SSDs are indispensable for comfortable play of game contents that are becoming larger.

Sony and Microsoft have yet to say anything regarding the matter, but with the information having been revealed by Samsung, it probably won't take too long for an official announcement from the two console manufacturers.

The PlayStation 5 and Xbox Scarlett will be released next year worldwide. We will keep you updated on the new consoles as soon as more come in on it, so stay tuned for all the latest news.