The PlayStation 4 is a rock-solid piece of hardware, but those who bought one early in the system’s lifespan know it also had one pretty glaring Achilles heel – its WiFi absolutely sucked. This is because Sony went for a cheap, dated WiFi chip instead of future proofing with a newer fifth-generation 802.11ac chip. Sony did eventually improve the WiFi capabilities of the PS4 Pro and PS4 slim models, but if you were an early adopter you were stuck with a console that required a wired internet connection for any sort of serious online play and even basic stuff like streaming. Well, thankfully, it seems Sony isn’t cheaping out on WiFi for the PlayStation 5.

Brazilian site Technoblog has uncovered the PS5’s wireless specifications, and it seems the new console will offer both WiFi 6 and Bluetooth 5.1. Check out the full spec sheet below (click the image for full resolution). 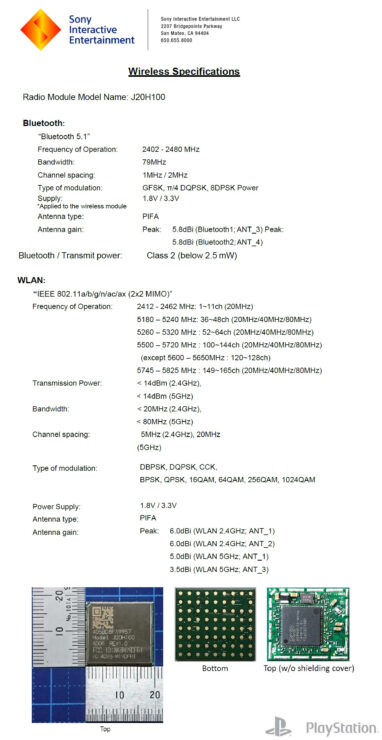 The WiFi 6 (802.11ax) standard offers a maximum download speed of 9.6gbps. Meanwhile the fourth-generation WiFi tech in the original PS4 offered maximum speeds of 300mbps and the fifth-generation tech in the PS4 Pro/slim offered a maximum of 3.5gbps. Now, these top speeds only theoretical, as you’re lucky to achieve downloads a tenth that fast under real-world conditions. That said, it’s the comparison that’s useful – WiFi 6 is 32x faster than the WiFi 4 chip in the original PS4. WiFi 6 is also said to be more stable in WiFi-congested areas, so those trying to play online wirelessly in apartment blocks or public places will hopefully have less problems. Bottomline, Sony is using the best tech available to them this time, so maybe you’ll be able to ditch that dusty old ethernet cable.

Meanwhile, Bluetooth 5.1 brings the console almost up to date (Bluetooth 5.2 is the latest version) and is a big jump over the Bluetooth 2.1 tech used in the original PS4 and Bluetooth 4.0 in the PS4 Pro. Hopefully this means plenty of Bluetooth devices will be compatible with the PS5.

The PlayStation 5 launches sometime this year. What do you think? Excited about the WiFi quality not being crap this time around?