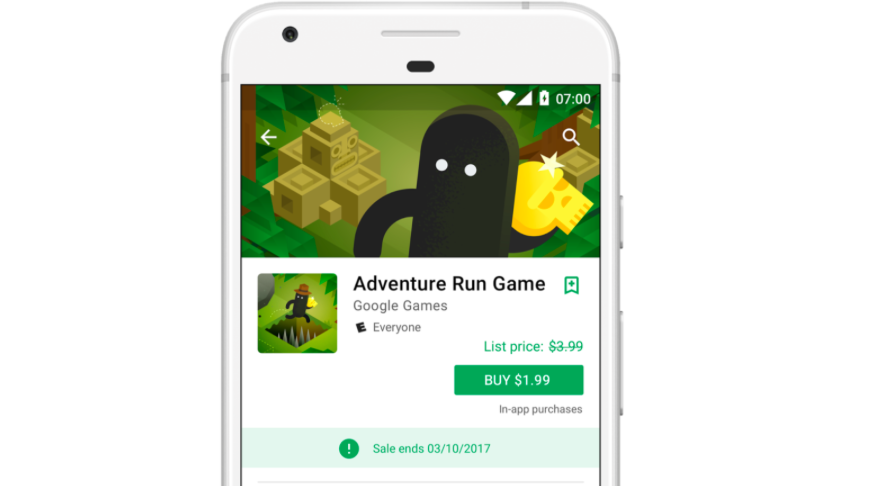 Google is bringing some new features and changes to Play Store. These new developments will make it easier to discover new games and also see sale pricing on apps. The discounted pricing on apps will be updated by developers, which means that Google is now providing enhanced control to every app developer for their own app listings on the Play Store. Google announced these features at the ongoing Game Developer Conference.

Developers can update discounted pricing along with the timeline for its validity. Earlier, this feature was only limited to TV Shows and Movies listings, but now even developers will be able to indicate sale pricing on their app listing. Until now, developer had to change the set pricing of the app to discounted pricing without being able to indicate about the running discount, which was also confusing for consumers as they used to find variable pricing for the same app.

The new feature shows the actual pricing in strikethrough and discounted pricing above it with purchase button beside it. There will also be a banner with the word "Sale" written on it. However, it does not mean that developers will be able to trick buyers. Google has laid down rules for a sale - the app must be on at least 30 percent discount and the sale should stay active for a full day (24 hours) and maximum for 8 days. After the end of the sale, developers will have to wait for 30 days for listing the next sale.

It is worth noting that sale could only be offered for apps purchase and not for subscription based services and in-app purchases. These new features will debut with a small update and will be quite helpful for both consumers and developers. In a pilot run of the new sale feature, Google says that developers witnessed up to twenty times more installations.

Not just app pricing, Google is also working on improving visibility of games on Play Store. The tech giant announced that it will be promoting games with high-quality gameplay. Earlier, the visibility was based on number of installs, but now it will be based on quality as well. Google is fixing a lot of issues on Play Store and is looking forward to improve user experience by launching helpful features. By promoting games on quality, Google wants to help small developers in reaching wider audience.

In its blog post, Google also said that it is bringing new high quality games such as TRANSFORMERS: Forged to Fight, Battle Breakers, Injustice 2, Beartopia, and Virtual Rabbids to Play Store. You can pre-register for these games by clicking on this link.