Pillars of Eternity 2: Deadfire Is On Its Way Through Fig Crowdfunding 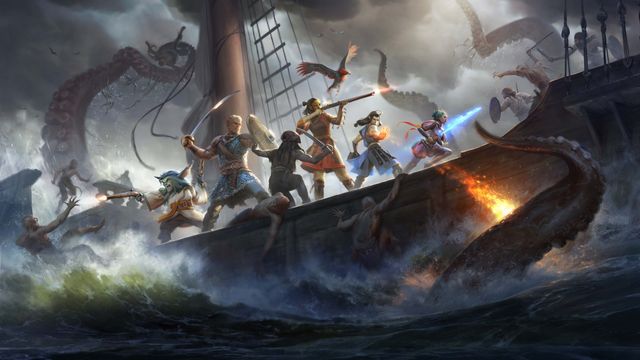 Pillars of Eternity 2: Deadfire is being developed through a Fig crowdfunding campaign, Polygon reports.

The Polygon article was quickly pulled after being published, but not before it was archived by an eagle-eyed Reddit user. According to Polygon, the crowdfunding campaign will go live later today and Obsidian Entertainment is looking for $1.1 million in funding, with $2.25 million open for equity. The game will pick up where the original Pillars of Eternity left off.

The official press release, as posted by Polygon, reads as follows:

“Eothas … the god of light and rebirth was thought dead, but he now inhabits the stone titan that sat buried under your keep, Caed Nua, for millennia. Ripping his way out of the ground, he destroys your stronghold and leaves you at the brink of death. To save your soul, you must track down the wayward god and demand answers — answers which could throw mortals and the gods themselves into chaos.”

In the campaign, players will be able to travel by both land and sea. Some old party members will make their comeback in Deadfire.

Down below you’ll find some concept art for Pillars of Eternity 2: Deadfire.

The original Pillars of Eternity was funded via Kickstarter back in 2012, and Obsidian Entertainment later entered a partnership with Paradox Interactive to release RPG. The game was inspired by titles such as Baldur’s Gate, Icewind Dale, and Planescape: Torment.

“This game would not have happened if not for the passion and generosity of our backers, and their faith in us to create the game they wanted,” said Feargus Urquhart, CEO of Obsidian Entertainment back in 2014. “How we are developing Pillars of Eternity has not, and will not be, changed; we will deliver the game we promised to our backers, and we will deliver it this year. Having Paradox as a partner, with their expertise in independent games like Pillars of Eternity, lets us put all of our focus on making an incredible game.”