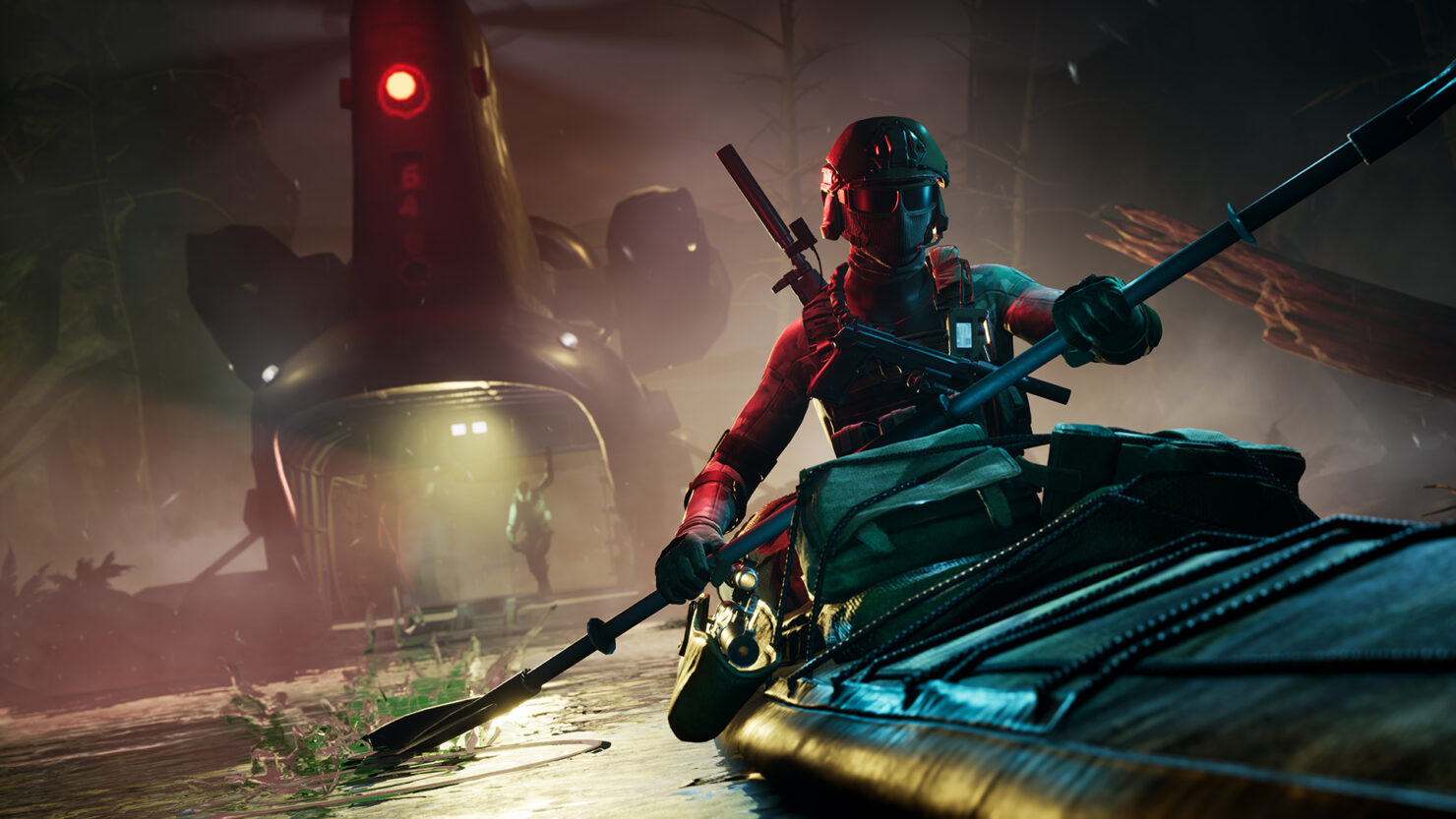 I spent the better part of a morning musing over a cup of coffee and trying to come up with a witty tagline for Phantom: Covert Ops. Realizing that I couldn't do any better than Tactical Kayaking Action, I donned my headset and slid back into the seat of a camo-printed kayak for two more missions that could wind up saving the world. 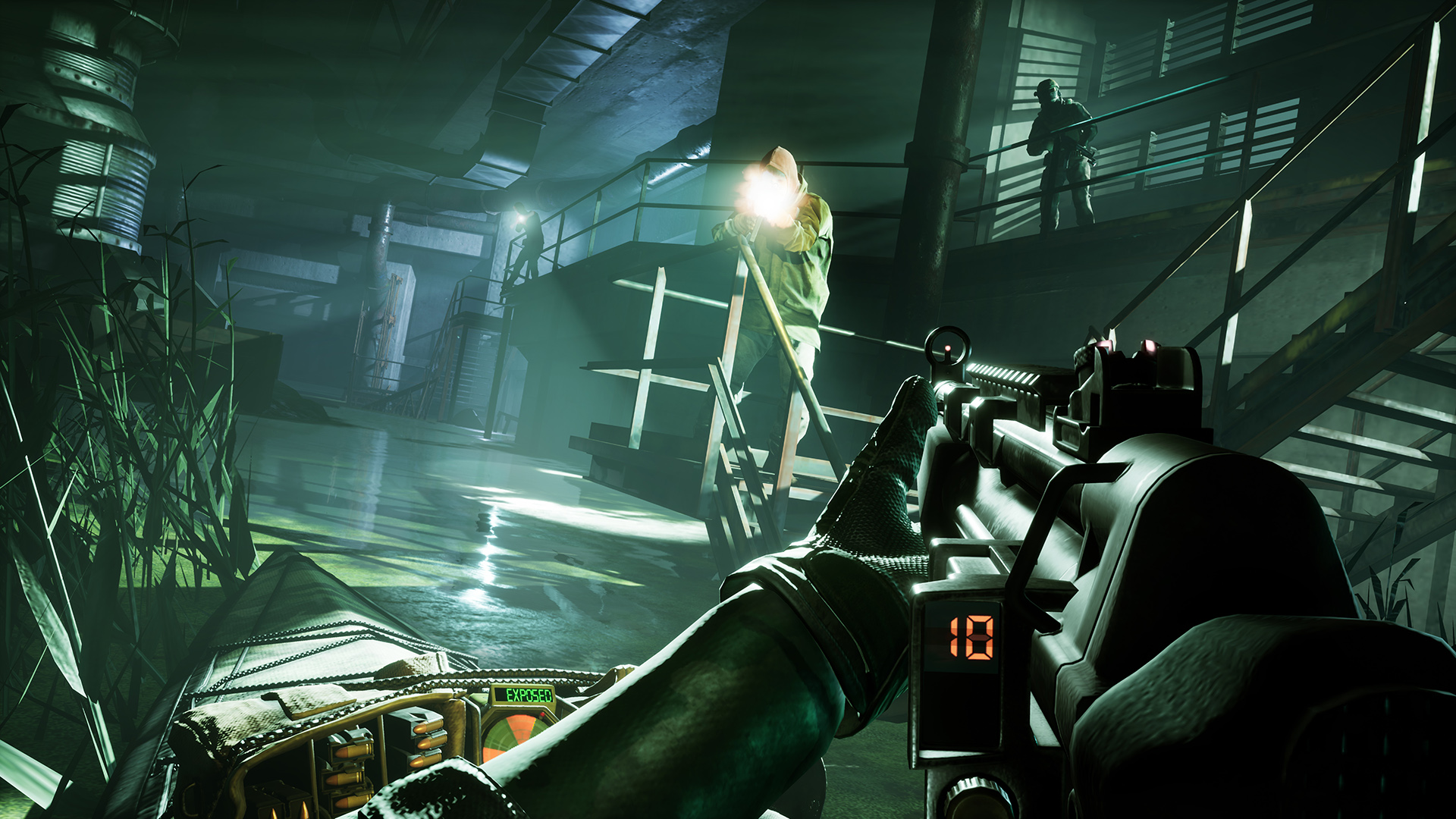 This isn't the first time that I've had the pleasure of demoing nDreams' latest VR experience. I last checked out Phantom: Covert Ops at E3 2019 when I tried out this seated experience on the Oculus Quest and was so impressed with the project that Wccftech awarded it the Best VR Game of the convention.

The first level to Phantom: Covert Ops is the same as what I originally played nearly a year ago: sneak into a derelict Cold War-era naval base, disable a radio tower, and try to get out. In the extra year of development time, there's been a number of new enhancements to make it feel more like a proper espionage game. Pre-mission briefings give the player a sense of purpose and objectives to clear out while in-ear comms from your commanding officers might help to alert the player about upcoming obstacles such as security cameras or a possible high value target. 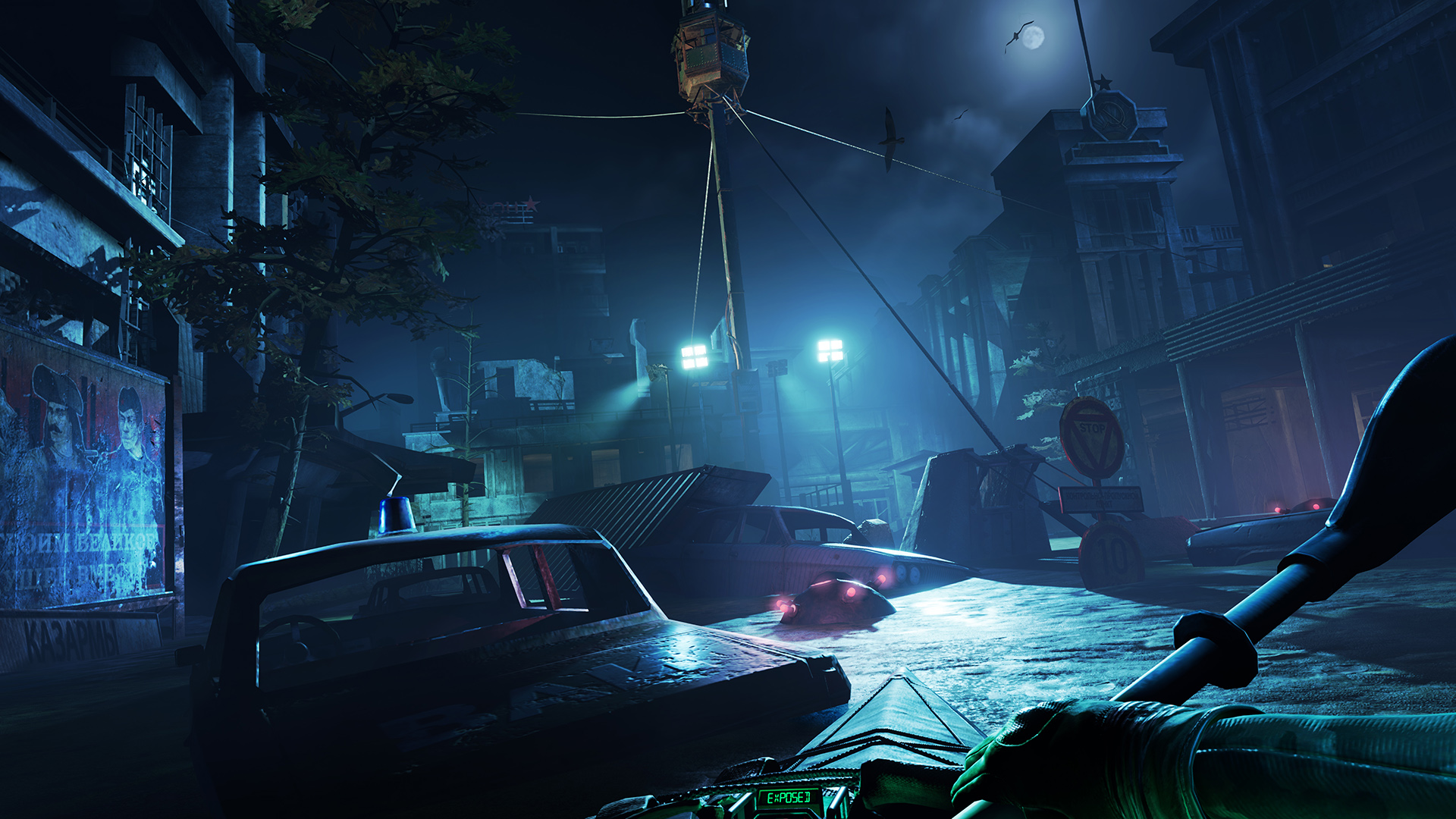 Typically what you can use during a mission is what you bring with you aboard your canoe: paddle, binoculars with targetting scope, pistol, submachine gun, sniper rifle, and enough ammo for each weapon. Gone was the package of C4 that I had for taking out a radar installation from the E3 demo but the open compartment on the kayak will be used for that, just as the second mission has noise-making devices you can acquire. Occasionally, the waterfront pathways will have stations conveniently placed to restock on ammo and equipment that just so happen to be accessible without ever having to get out of your kayak. There's also a stealth radar in the center console that gives you a minimal readout on whether your kayak is visible or hidden from enemy view as well as a general direction from where

Everything that you need to complete the mission (minus what you pick up along the way) is immediately accessible at arms reach and magically reappears on the character without fear of dropping your pistol off the side of the boat. Your paddle is attached to the left side of the kayak, the pistol strapped to your chest, sniper rifle on the right side, and submachine gun on your back. All of these can be reached at any time, although I found trying to reach for a gun while still holding the oar in one hand usually led to gripping the oar in both hands, while it took a couple of tries to equip the submachine gun and not just grasp at air. All of your ammunition comes in pre-filled magazines and being able to visually identify how much you have at a given time is a smart way to inform the player without having to rely on cluttering up the HUD (there's also a round counter on the weapon itself to see how much is left in your current magazine). 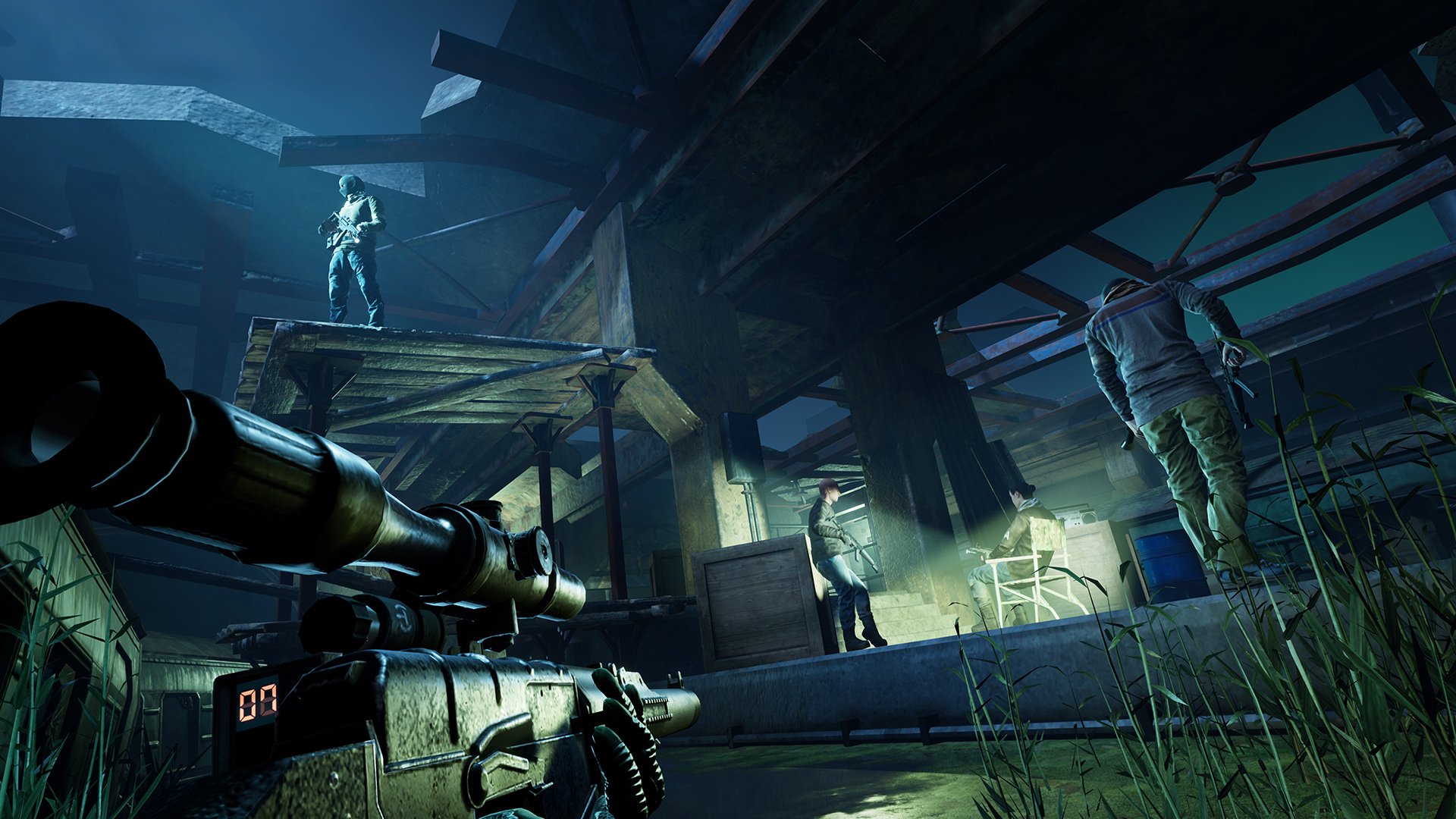 Since everything is controlled by your hands, the motion tracking has to not only be good but great in order to convey a realistic experience. nDreams has managed to accomplish just that and every action I took felt fluid and simple to control. Reaching out and grasping the kayak paddle came naturally and the actions of rowing, not just forwards but also backwards, came naturally without having to be guided by numerous tutorials. There are buttons on each Rift controller to help guide the kayak into a sharper turn, but beyond that, everything is naturally driven by motion. Get too close to a wall? Shove off with the end of the paddle to get yourself back on track. Even reaching out for a railing or level and pulling yourself in closer feels realistic and true to the motion.

Phantom: Covert Ops, even in the preview build I checked out recently, drops hints about a greater story working behind the scenes than just going into a military installation, knocking out a few key objectives, and sneaking your way out. A biological weapon known as Project Titan is referenced throughout and one of the key players on the enemy forces is an operative presumed dead after an airstrike some years prior (and is even played by David Hayter himself, the legendary Solid Snake). If nDreams can execute on the narrative premises they're leading to, this could be one stealth thriller that has me on the edge of my seat. 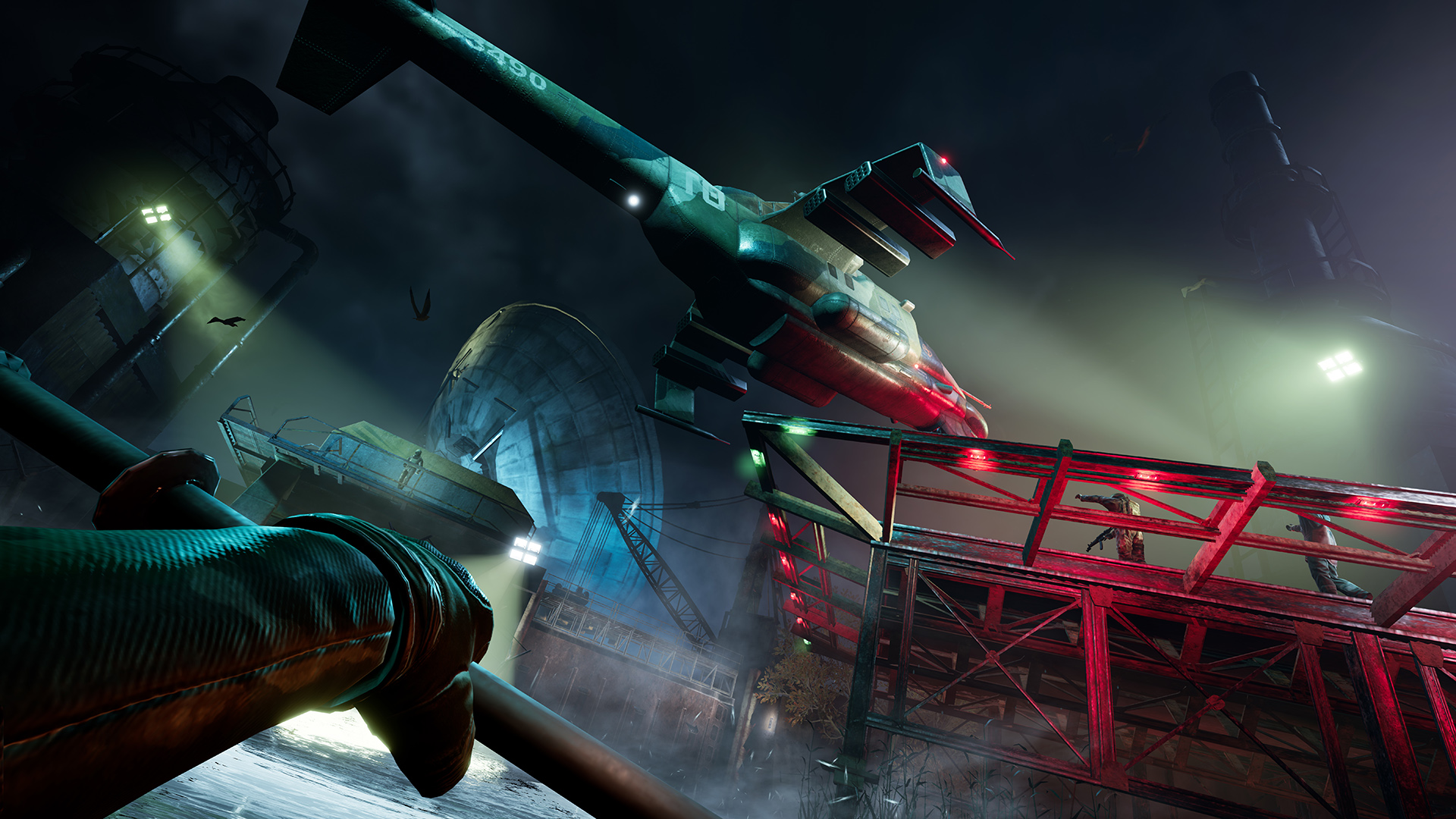 In my two previews of Phantom: Covert Ops, I've since checked the game out on Oculus Quest (at E3 2019) as well as Oculus Rift in the comfort of my own home. The full experience is slated to run about six to eight hours, with multiple modes and unlockables to help add more to the playtime. While Phantom: Covert Ops is an Oculus exclusive, players won't have to choose which platform to play over the other. It will support cross-buy for both the Oculus Rift and Oculus Quest, as well as support the Oculus Link cable.

Phantom: Covert Ops will be available on June 25th, 2020, exclusively on the Oculus platform.