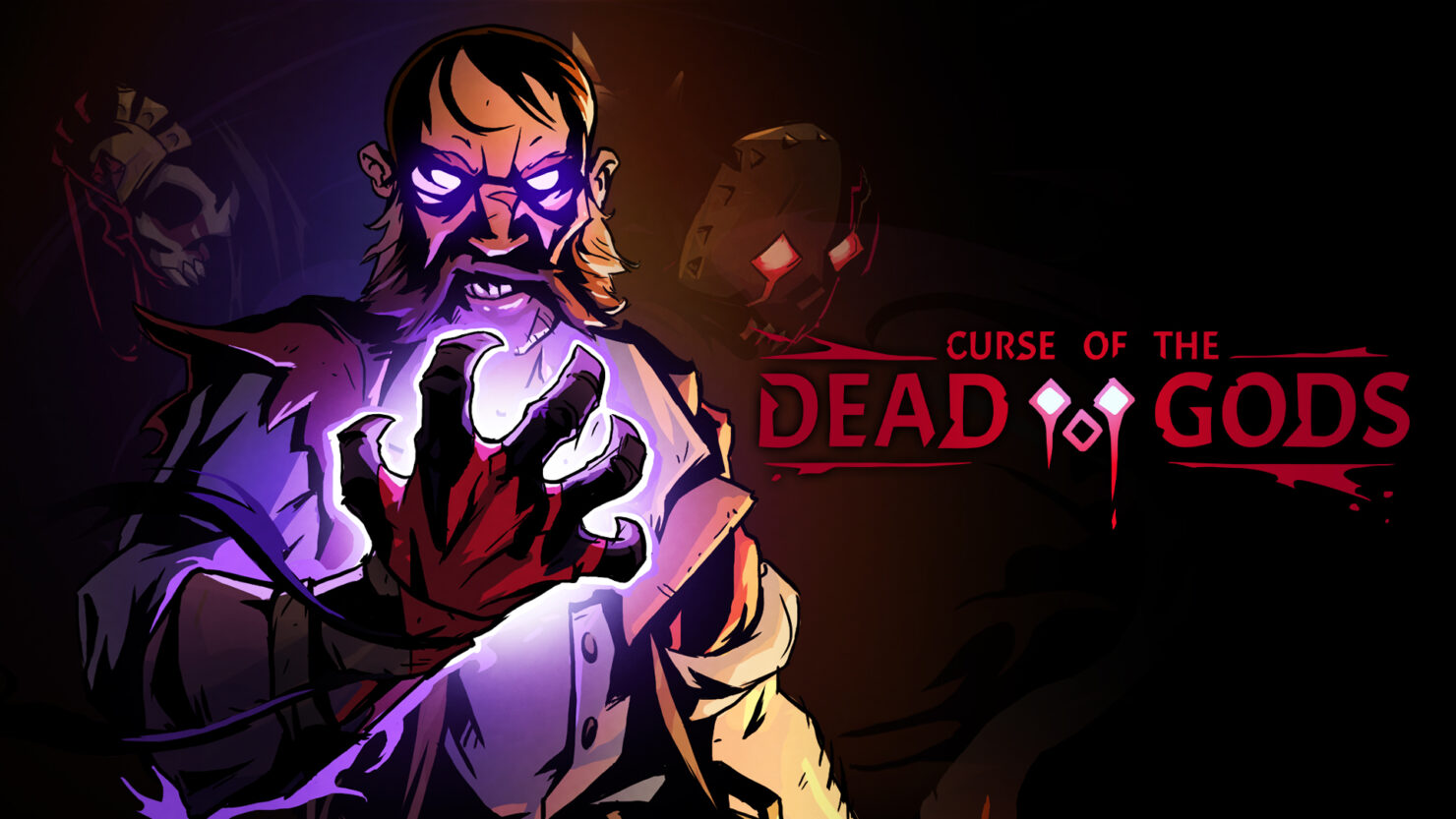 I had the pleasure of checking out Curse of the Dead Gods while visiting the Focus Home Interactive booth at PAX East 2020 and get a quick hands-on with the current build. This upcoming roguelike action RPG from Passtech Games, known previously for Space Run and Masters of Anima, takes inspiration from Hades and Darkest Dungeon but infusing them with blood sacrifices and curses to become something truly unique.

A typical run of Curse of The Dead Gods' preview build started me off in a dilapidated Mayan temple and into a series of interconnected series of rooms filled with both traps and monsters alike. Instead of blindly moving forward and hoping for a lucky run, players can choose a branching path of various connections that show what the next rewards might be, whether it’s a relic altar, source for a new weapon, gold or more. Boss fights occur after a preset number of rooms whether you want them to or not, so knowing exactly when the next big challenge is coming up helps to give players a tiny bit of hope in preparation.

The design of Curse of The Dead Gods reminded me a fair bit of Hades and Dead Cells. My hero, who only lasted two rooms during my first run and made it almost to the end of the first boss on the last, equips three weapons (main, offhand, and heavy) as well as having three color-coded attributes that looked similar to Dead Cells at a glance. The isometric camera is where the Hades influence comes in, as well as the twin-stick action to move around and slash through to victory. Most of my weapons revolved around the typical swords, spears and guns but there should be a much wider selection for the Early Access release. 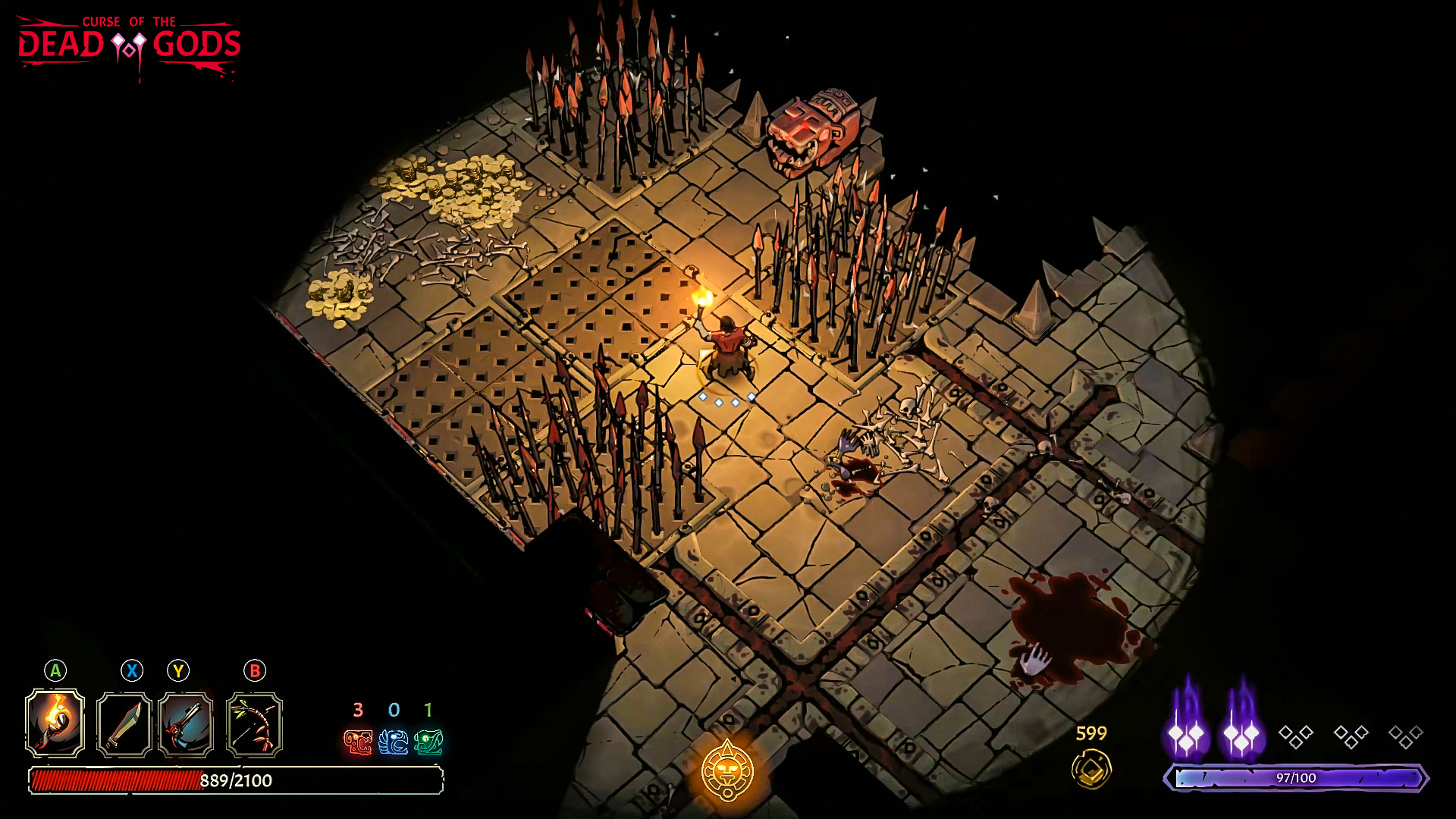 Don’t expect Curse of The Dead Gods to take it easy on the player though. The core mechanic to this roguelike action RPG revolves around taking in corruption and dealing curses to the player. After sustaining enough damage or offering up corruption in lieu of gold to an upgrade altar, players will be “gifted” with a new curse that usually has some sort of detrimental effect to the rest of the run. Five of these curses is enough to make a run unwinnable, so being able to mitigate taking damage and maintaining a low corruption count is paramount to survival. When a weapon altar has a powerful weapon, such as a spear that can help recover a sliver of HP with every enemy kill, the temptation of just a little bit of corruption can be great.

While everything in Curse of The Dead Gods is out for your blood, players have a few tools to survive just a bit longer. There’s a stamina system at play that prevents players from dodging around infinitely but I found it to be more than generous enough to rarely leave me without some sort of defensive option. The player can also block enemy attacks and perfectly timing one will result in a parry that instantly replenishes a bit of stamina. Enemies usually offer some sort of visible tell, such as a flash of white light, that can give some guidance on when to attempt a parry.

Basic attacks won’t consume any stamina at first, but chaining them together in a longer combo will consume stamina, as will using the ranged secondary weapon or heavy weapon if you’ve acquired one from an altar. Interweaving perfect parries between combos can keep the offensive going strong, not to mention it’s stylish and satisfying to pull off. The player’s secondary weapon can be fired normally but holding the button down will charge up the strike and releasing it once the ability flashes white will drastically increase its effectiveness.

From what I could see, there is a persistent progression system in play with the collection of skull tokens throughout each run of Curse of The Dead Gods. I couldn’t dig deep into the menus to see exactly where these could be spent, but if this roguelike takes enough inspiration from the likes of Dead Cells, I could see these being used to add new items to the global loot pool.

Curse of The Dead Gods from Focus Home Interactive and Passtech Games will be released on Steam Early Access today with a console release on PlayStation 4, Xbox One and Nintendo Switch later on.