Let's all come to an agreement here: We can't agree on everything. It's just not going to happen. If we did agree on everything, the world would be a bloody boring place. Not only that, I'd be locked up, behind bars, for serial-murdering the whole unstimulating lot of you. That's the circle of life thing that The Lion King kept going on about way back when. But, on the subject of not agreeing with somebody, Paradox Interactive Founder and Executive Chairman of the Board, Fredrik Wester, has caused a bit of a ruckus recently.

Splitting the Revenue and Talking Exclusivity

It seems only right to start from the start, which is the start - as one could imagine. At a recent Gamelab hosted by Gamesindustry.biz, the former Paradox Interactive CEO had a number of things to say. One thing, in particular, gathered the most attention when he spoke about the 70/30% revenue split common across the market. At the Gamelab, Fredrik Wester stated:

I think the 70/30 revenue split is outrageous. I think the platform holders are taking too much money. Everyone in the press here, just quote me on that.

Following on from this, he suggested that the split is as a result of a bygone era, originated from the VHS industry where the manufacturer would take 30%, leaving 70% to the movie producer.

That was physical. It cost a lot of money. This doesn't cost anything. So Epic has done a great job for the whole industry, because you get 88%. Fantastic move. Thank you very much.

Naturally, once this had been covered everybody took it as an assault on Steam and the backing of stores like Epic - despite the fact it isn't. Paradox Interactive are releasing their games on all platforms and are not engaging in exclusivity deals. However, Fredrik was quick to point out the simple understanding behind the exclusivity deal.

Ask yourself "Why do they choose do go exclusive?" and I'll give you a hint: it's not to f**k up your life and force you to use multiple launchers.

This is a simplified version of the statement I've had to make so many times. Yes, exclusivity deals for AAA titles are inexcusable, it's pure greed as the companies can afford to take the risk (not that there is a risk with titles like Borderlands 3). However, you look at exclusive titles like Close to the Sun, The Soujourn, Operencia: The Stolen Sun and Untitled Goose Game where the developer is small - some even brand new - and the guaranteed cash for exclusivity can literally keep the studio alive.

A little context: House House is a small independent studio that has been operating on a tight budget for years, so a partnership like this gives us a means to make games sustainably for the foreseeable future — in an industry like ours, this kind of stability is huge.

Much like Fredrik Wester, I understand why smaller developers take the exclusives. What I wish is that people would look beyond their own self-obsessed indignation and get over their Stockholm Syndrome to a particular store and understand that sometimes these decisions are made for survival and even the ability to actually make the game. 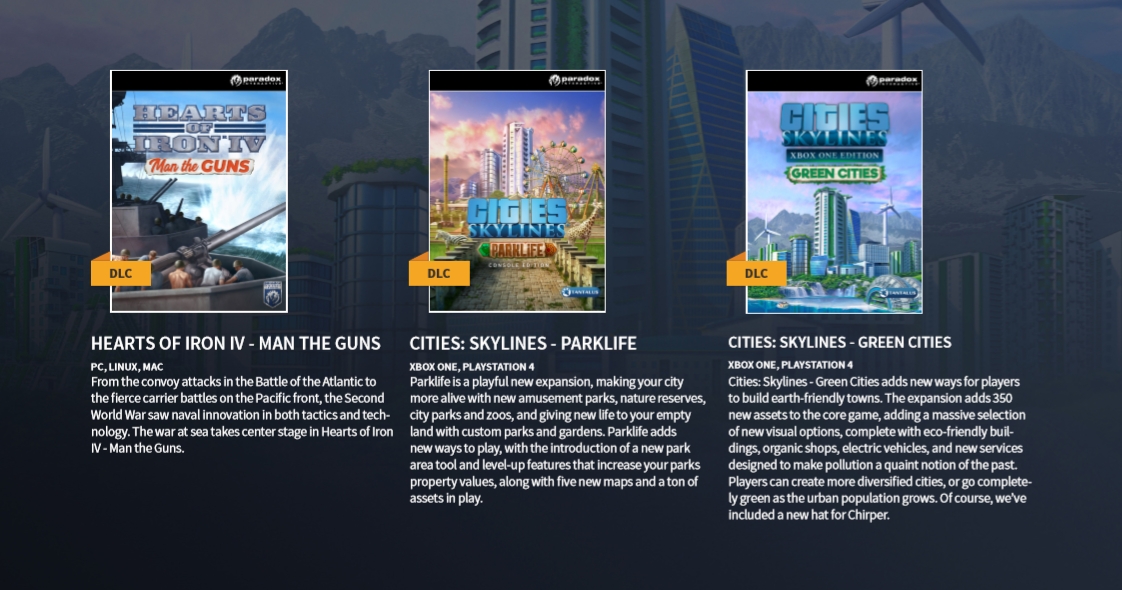 I've covered the financial reports of Paradox Interactive quite a bit over the previous few years, particularly following what they themselves have called the "Long Tail" approach to their game releases. Simply put, they support a game considerably longer than other companies do, which includes the releasing of further DLC alongside expansions and free updates.

This DLC approach can be seen by some as bad because people don't like nice things. Naturally, once the previous statements were made regarding revenue split, people wanted to take pot-shots at Fredrik and Paradox Interactive in any way they could.

It's okay guys, you can still make plenty by putting out 200 separate 20 dollar DLCs for Imperator: Rome https://t.co/0ZvFXLAd2W

Go make some more dlc instead ya greedy sob

This directly led into the second day of a new "unpopular opinions" greatest-hits tour Fredrik is currently on. He started by stating he liked the ending of Season 8 of Game of Thrones. The following day it was a statement that games were not better 20 years ago. How that can be an unpopular opinion, I don't know, it's pretty much undeniably true (with some exceptions of course). It was after this that we got to Fredrik's other unpopular opinion, as well as his defending Paradox Interactive's DLC method.

Another unpopular opinion is that I think our DLC policy is fair and good business practice. I'll go into that tomorrow not to entirely break the Internet. https://t.co/TkU6LBKrdf

I've been a fan of Paradox Interactives games since when I played the first Hearts of Iron. This is before I was writing or even thinking about video games in ways more than "THIS IS FUN. CHRIS LIKES". There's no doubt that being a late adopter to a Paradox Interactive title, it's going to seem expensive if you want every bit of DLC. The point I want to make, as I've made before, is that Paradox games tend to be full-fledged on release and content DLC adds so much more to them. These are not the same sorts of DLC you find ripped out of other titles, just to be added in at a cost later.

Rather than embed all of the tweets covering this, I'm just going to bulk them into one large quote:

Our DLC model is based on the idea that you pay for new content after the full game release. This helps to finance the further development of the game, which is of gain for all players. Every time we release a DLC we also release a big update for free, which means that you get continous upgrades of your game even if you choose not to buy any DLC. This would not be possible to fund otherwise.

In multiplayer, you always play with the DLCs of the player who has the most DLC installed. This means you have access to all content in MP without having paid for it. It has been a way for us to avoid splitting up the player base.

I know this is not a flawless model and that a lot of new players get intimidated by seeing a game with hundreds of $$$ in DLC, however we also run deep discounts on all our games and DLCs regularly. "I feel I really want everything, but I don't think it's worth the price" - like with all business; if you don't think it's worth it, don't buy it. Paradox should not be an exception.

The DLC model also allows us to experiment more and be a bit crazy with content, hopefully resulting in more interesting content over time. And now for the grand finale: I am personally in favor of DLCs that are purely enhancements of graphics (skins, flags etc). Why? They have no gameplay effect (pay to win), doesn't lock out functions and helps fund the game and make it better.

Personally, I find it hard to argue with any of the points made. Yes, the sheer quantity of DLC can look overwhelming, even to me - a person who buys a fair few of them because I actually support the games and the company, because to me they are one of the few good publishers around.

It isn't a flawless model, there is no flawless model when it comes to games that are getting larger and larger, where developers are working on them long after the point of sale. Revenue needs to pay for developers still making content for a game over four years after it originally launched, plus the large patches and upgrades getting rolled out for free to non-DLC buyers.

I don't think I can top that last line. I'm more than happy with anybody high up in a company that will directly interact with people and this is most certainly without a PR filter. Is Paradox Interactive listening to players? Yes they are, they have done for a long time. Are they listening to the morons or, should I say, "people who 'BLURG BLARGH GREEDY BASTARDS DLC BAD OOGA BOOKA'"? No, they aren't, and I admire them all the more for it.

This is considerably more open than that of Tim Sweeney, which I covered recently, though I still have to stick by my thoughts that it was refreshing to see him also communicate with the audience. The thing is, I'm always appreciative of anybody in the industry who makes it clear when there are issues, rather than kowtowing under concerns over larger names disliking what's said. What needs to happen is have the industry be a more open place, where people speak.

Not only do we find out about things like visibility issues on Steam or the reason for being exclusive to a particular store, we also find out about things of considerably more import like the terrible working conditions at Rockstar Games, horrible levels of crunch at Epic Games, Treyarch and NetherRealm and also why games like Anthem were launched in the pathetic state they were.

The only way to understand decisions and highlight problems is when things are spoken about, so I'm all for more of that sort of thing.