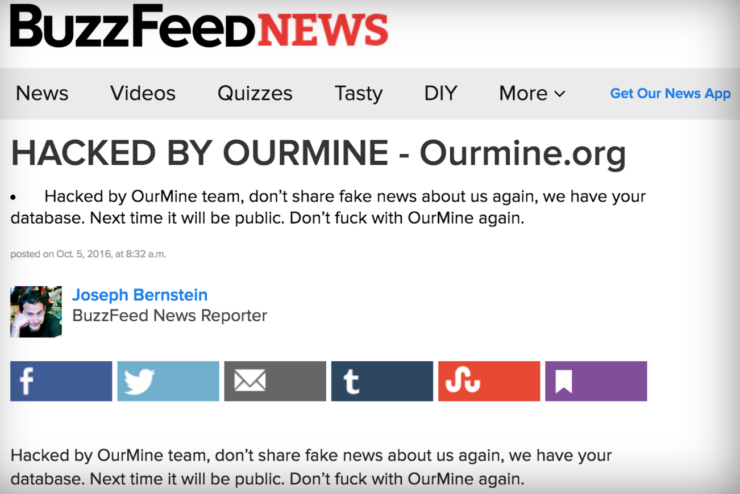 A number of articles on BuzzFeed are showing a message from the OurMine security group. The site's homepage displays a thumbnail of Tim Kaine and Mine Pence with the headline "Hacked by OurMine."

BuzzFeed posts defaced by hackers over an alleged fake story

A number of BuzzFeed posts appear with a "Hacked by OurMine" message, replacing the content of several stories. The hacking group, OurMine, has also changed the titles of several pieces on the website that now display the same message. The body of some stories carry a note warning BuzzFeed of never sharing "fake news about us again." A link shared on Twitter led to an individual article page which read:

Hacked by OurMine team, don’t share fake news about us again, we have your database. Next time it will be public. Don’t fuck with OurMine again.

The page has since been removed from the site.

In a statement, BuzzFeed said, "The hacking group OurMine Wednesday altered several posts on BuzzFeed.com after a BuzzFeed News article reported that a Saudi teenager is most likely behind scores of hacks of tech CEOs and celebrities. BuzzFeed News is working to restore the altered articles, including the original report on the group."

The author, Joseph Bernstein, whose post has been messed up, recently wrote a piece about OurMine. He claimed it was the brainchild of a "soccer-obsessed high-school student," under the headline "This Saudi Teen Is Probably Behind the Hacks of Dozens of Tech CEOs." OurMine initially denied the report, releasing a statement claiming that the person was "just a fan" of OurMine. Today's vandalism tells a different story. The hacking group is notorious for breaking into social media accounts of several prominent users, including CEOs of Facebook, and Google.

The hackers have threatened the publication to openly publish BuzzFeed's database, however, the group didn't say what kind of information this database contained.