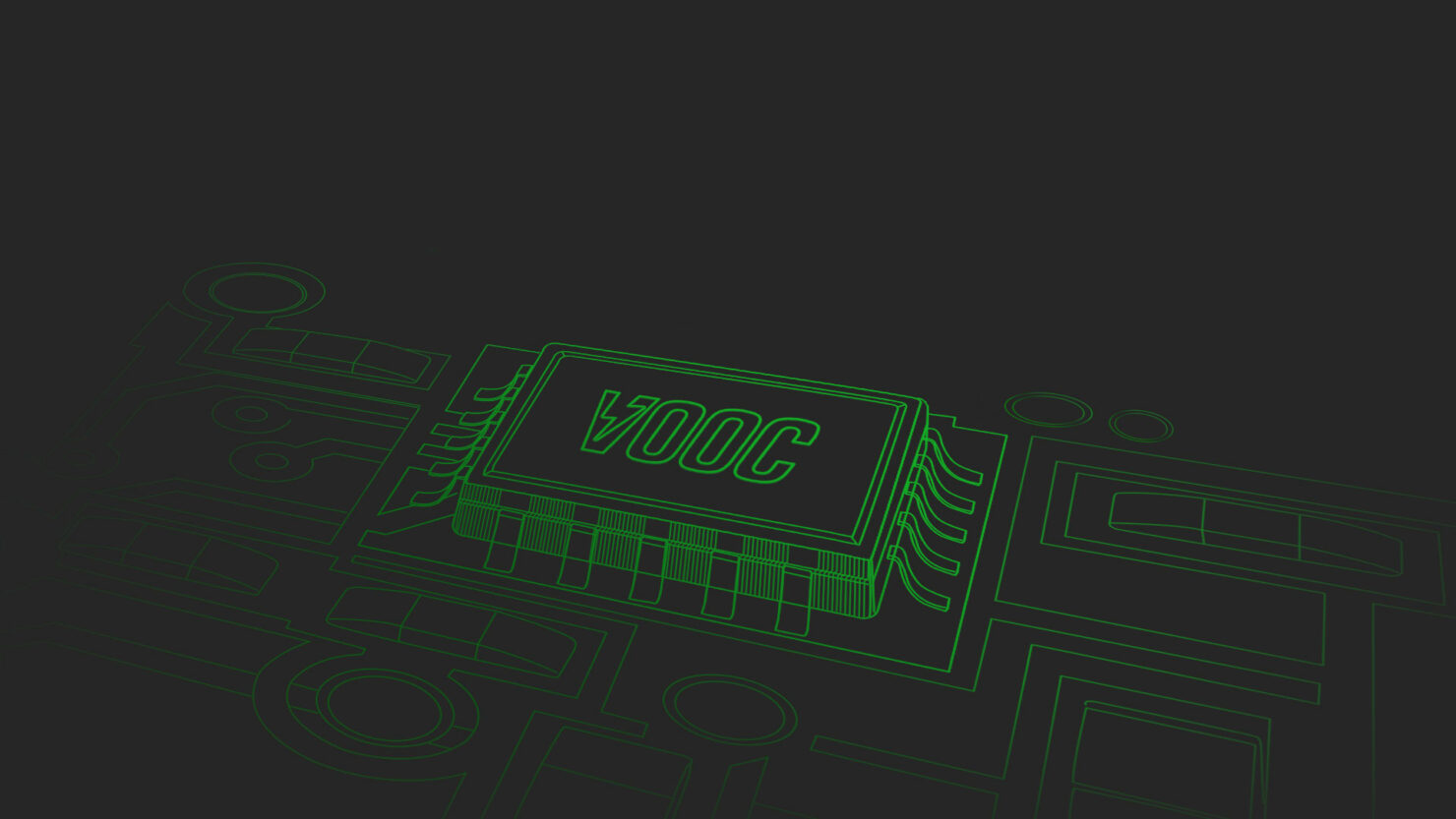 Nowadays, you have all sorts of fast-charging technology ranging from Qualcomm’s Quick Charge, OnePlus’ Dash Charge, Samsung’s own Adaptive Fast Charging, but one that we have yet to discuss in detail is the OPPO Super VOOC technology. Unveiled back in 2016, Super VOOC promised to top up your phone’s battery life in record time so that you never have to worry about plugging your device for prolonged periods. Let us talk more in detail about what OPPO brings to the table and how it could benefit future devices.

A power brick or wireless charging pad is used to charge the smartphone. As the majority of you aware, power is measured in watts and the more wattage being supplied to a smartphone, the faster it will charge. Lots of the smartphone chargers operate at 5V and supply a current of 2A, so multiple 5V x 2A and you get 10 watts of power. Super VOOC takes a different approach when it comes to fast-charging but if you read right at the bottom, the company approach has changed if you fast forward to 2018.

Using the same 5V voltage rating, the charger supplies current at 4A or 4 amperes, resulting in a total of 20 watts. This will certainly allow the smartphone’s battery to charge faster than before. Android Authority also managed to point out that smartphone manufacturers often talk about a device’s capability of being able to take its battery from 0 to 80 percent or 0 to 75 percent in the shortest time possible. 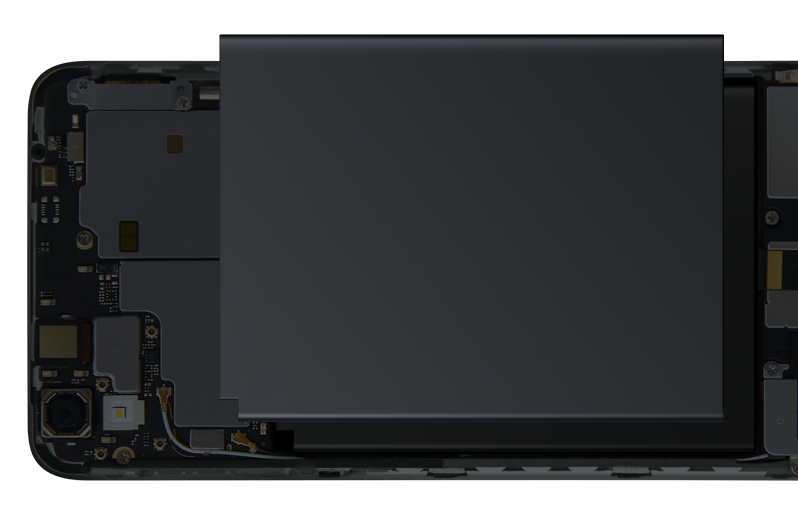 Now, why is it that these manufacturers do not provide the total time it takes for a smartphone’s battery to reach from 0 to 100 percent? Well, that will result in a terrible marketing strategy and that is because a battery charging takes place in two stages; reach to a 100 percent takes a significantly longer, which is manufacturers do not want to point out this information.

Stage one is where the battery charges rapidly from 0 to 80 percent, and what is happening here is that the charger is supplying a lot of watts to the phone, which would explain why these days, your device is able to come up to 80 percent of its total battery capacity in just 30-35 minutes. The drawback here is that the remaining 20 percent takes the most amount of time, and those details are purposely left out by manufacturers for the aforementioned reason.

Phones normally take much longer for their batteries to reach 100 percent, which is quite normal. However, there are certain properties of Super VOOC that are also beneficial for fast-charging smartphones.

Though various fast-charging technologies have improved considerably, certain contingencies are present in devices in order to prevent them from overheating. For example, the processor running in the chipset clocks down (also known as thermal throttling) when the device’s temperature is reaching unacceptable levels. Similarly, if you are watching a video or playing an intensive 3D application on your smartphone or tablet after you plug in your smartphone, here is what you will notice.

When you are charging your handset, it will overheat and when you are attempting to charge your smartphone and play a video at the same time, heat is going to be generated from two different sources. At this point, the fast-charging feature of the smartphone shuts off and starts to charge normally in order to reduce those temperatures.

Fortunately, Super VOOC does the opposite and is able to retain lower temperatures while charging the battery rapidly at the same time. OPPO’s proprietary fast-charging technology charges at the same rate irrespective of the user playing an intensive 3D application or engaged in media consumption.

Wanna know a fun fact here? The OPPO Find X Lamborghini Limited Edition also utilizes Super VOOC technology and guess how long it took for the device’s 3,400mAh battery to get charged to 100 percent? Only 35 minutes. However, the company was able to achieve this by slightly altering its fast-charging technology. Instead of using 5V to charge the smartphone, OPPO achieved this through a voltage rating of 10V, which actually contradicts the original technology that was showcased back in 2016. 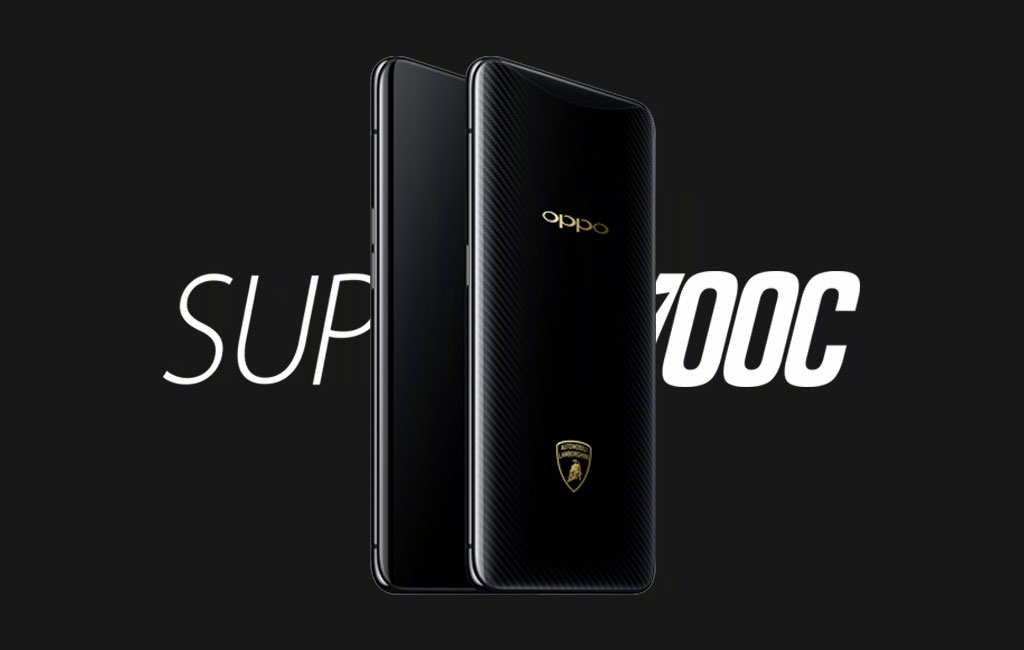 OPPO also stated during that time that 5V was actually beneficial for the phone because lower voltage not only offers lower temperature but it is also safe to use your phone while charging. It is possible that the company incorporated several protections to prevent irreparable damage from being inflicted on the ultra-expensive flagship, but it looks like we’ll be finding this out in the future.

According to the comparison seen in the image, it will take 220 minutes to charge on a standard 5V 1A brick to completely charge the OPPO Find X Lamborghini Limited Edition, while a common 5V 2A charger takes 135 minutes. With the current VOOC Flash charge, it takes just 90 minutes to charge from 0-100 percent but the new and improved Super VOOC is able to fully charge the device in just 35 minutes. That is 61 percent faster because it pushes 50W with its new 10V 5A charger. 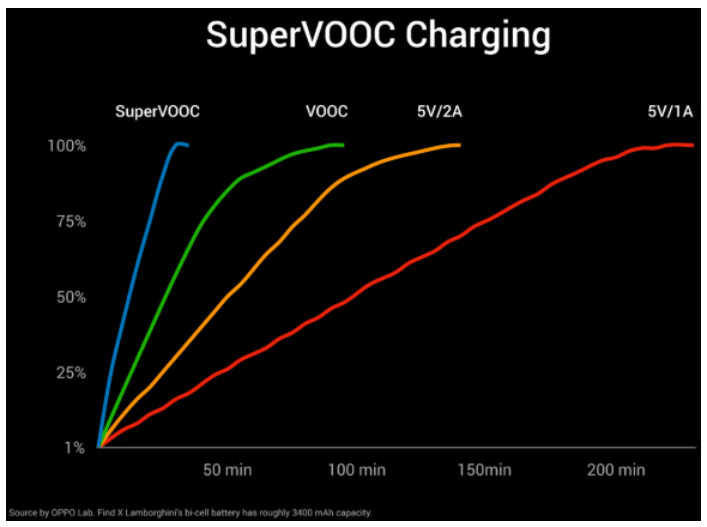 That is definitely a lot of wattage for a smartphone and we won’t be surprised if other manufacturers start to introduce the same voltage and current ratings down the road. Let us hope that this approach does not end up being detrimental for the smartphone’s battery.

We certainly hoped that you enjoyed reading about OPPO’s Super VOOC fast-charging technology. If you have any thoughts or if you’d like to add something, do let us know down in the comments.