ONRUSH Will Take Full Advantage of XB1X and PS4 Pro; Developers Are Huge Fans of the Switch 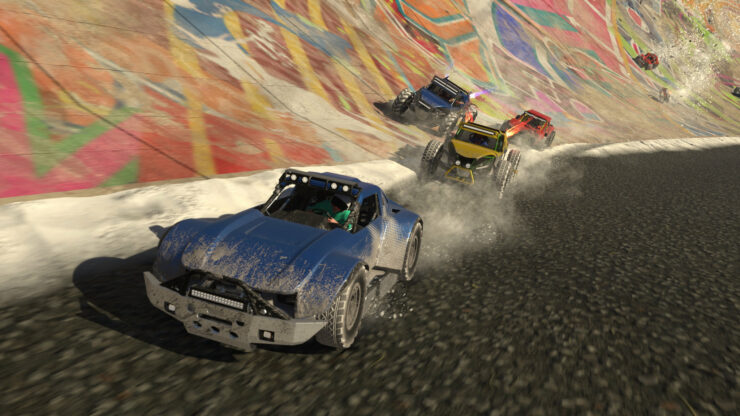 In an interview with RedBull Games, Associate Game Director Jamie Brayshaw said that ONRUSH will fully exploit the capabilities of Sony's PlayStation 4 Pro and Microsoft's Xbox One X consoles.

We're absolutely going to take full advantage of the extra horsepower of the PS4 Pro and Xbox One X. It's safe to say that we're working hard on ensuring the new engine and new tech we've built is enabling us to deliver constant and chaotic action.

Game Director Paul Rustchynsky was then asked about a potential port for the Nintendo Switch console and here's his reply:

We haven't started looking at what it would take to get up and running on Switch, but we are huge fans of Nintendo and the Switch is a fantastic piece of kit.

ONRUSH is due to launch in Summer 2018 for PlayStation 4 and Xbox One. There's no word yet of a potential PC release, strangely enough.

ARE YOU READY FOR THE RUSH?
Arcade racing is BACK! ONRUSH rewrites the rules of racing, throwing players into a competition where fun is just as important as the fight for first. A sport built by the fans, for the fans, ONRUSH is about chasing the ultimate adrenaline rush – not just your rivals.

ALL-IN ACTION
ONRUSH is a contact sport. Playing it safe is not an option when running the gauntlet in landscapes riddled with risk against a pack of intensely fierce competitors. Racers will have to put everything on the line when chasing the win with daring takedowns, team maneuvers and wild stunts.

THE ULTIMATE PAYOFF
Unleash your RUSH! Our RUSH mode is the ultimate manifestation of speed and strength – an intense and unstoppable power that promises your best thrills and takedowns. RUSH is a huge shot of adrenaline to your game, whether you’re on the rampage or protecting your team-mates and it’s a hit you’ll crave again and again.

A NEW BREED OF RACING
Think you know what to expect from the vehicles of ONRUSH? Think again. Eight standout classes form the distinctive line-up of contenders, each bringing their own handling style, abilities and characteristics – including their very own unique flavour of RUSH. Whichever you pick, rest assured: you’re in for the ride of your life.