Back in June, earlier this year, OPPO and OnePlus officially merged their product and R&D teams and in July, OnePlus introduced the merger of both ColorOS and OxygenOS codebases. However, until now, things were not clear as to how far this merger would go. Now, the company has shared some more information on how its integration with OPPO will be, how it will shape the hardware and software strategy for the company in the future, and more importantly, what this will mean for the OnePlus users. The highlight of this new announcement is the new unified OS for OnePlus and OPPO devices.

Pete Lau, the Chief Product Officer of both OnePlus and OPPO, has talked about the integration with OPPO and how it is a starting point of "OnePlus 2.0," he also indicates that this is a significant achievement for the company. Moving onto the products and services, Lau has confirmed that the company will stick to its "Never Settle." He also talked about how OnePlus will continue to provide high-quality products at various price points, and the users will still be able to unlock their bootloaders despite the new changes that will come this way.

The OnePlus design team that was previously independent has also merged with OPPO and formed a single, more prominent design. Now, this team works on multiple products from both brands. However, the marketing, branding, and PR teams for OnePlus are going to remain independent.

One of the key announcements was the merger of OxygenOS and ColorOS. This merger is going beyond just the shared codebase integration. OnePlus has stated that the new unified OS will combine the best of both worlds; the fast and burden-free experience of OxygenOS compared with the stability and feature-rich nature of ColorOS. The company, however, did not reveal a name. 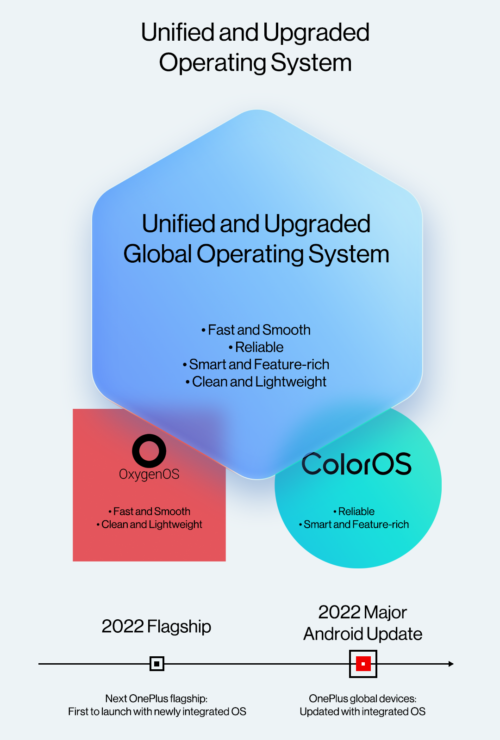 Lau has reassured OnePlus fans that the new unified operating system "will keep the DNA of OxygenOS that many of you love so much."

We will customize the unified OS specifically for OnePlus devices to make sure it meets your expectations, for example by keeping it as clean and lightweight as before, and continuing to support unlock bootloaders.

Although the codebase is going to be the same, the UI on both phones will be different, and we will have to wait and see how these companies get on about changing the appearance. OnePlus has also reiterated that it will not include ads in the software.

As far as the release date is concerned, the unified OS will debut on the OnePlus 10 that is launching next year. The current models, including the OnePlus 8, will also receive the update. However, we have not been given any specific timeline either. Last but not least, the company has revealed that it will officially announce OxygenOS 12 based on Android 12 in the coming weeks.

OnePlus has also reassured that its partnership with Hasselblad will continue, and both companies will be working together in the future. The company has also assured that it will focus on improving the user experience of the camera app and plans on investing in developments of advanced zoom features, new color filters array, better image stabilization, and next-gen camera modules.