We recently reported how you can own a OnePlus 8 before it even officially launches thanks to a program that the company is launching that will allow users to enrol in it. The company will then choose 10 people and ship the devices out to them for reviewing purposes, once the reviews are submitted, they will be evaluated, and the winners will get to keep the devices. Pretty clever, I'd say.

We already know that the reveal of OnePlus 8 and 8 Pro is imminent as the rumour points to April 15th and despite the COVID-19 pandemic bringing the world to a halt, the one thing that we are certain of is that there are always chances of an online reveal. We have seen so many companies do that and it has proven successful too. However, we are not here to talk about when the device is going to launch.

We have just got our hands on some fresh information regarding the specification of both devices and seems like that OnePlus is finally jumping the bandwagon and bringing a higher refresh rate screen along with some other improvements that have become the norm with smartphones.

OnePlus 8 and OnePlus 8 Pro Will Have Higher Refresh Rate screens, Snapdragon 865, and IP68 Rating for the OnePlus 8 Pro

Now the leak is pretty convincing and reveals some key information. Before we begin talking, the devices are a lot similar to the OnePlus 7T, but there are some changes. For starters, you are getting the Snapdragon 865 on both devices, but the OnePlus 8 Pro is the device that is getting the key upgrades in almost every department. Moreover, the 8 Pro is also IP68 rating, whereas the leak suggests that the OnePlus 8 will not have any IP rating. You can check the leaked spec-sheet below. 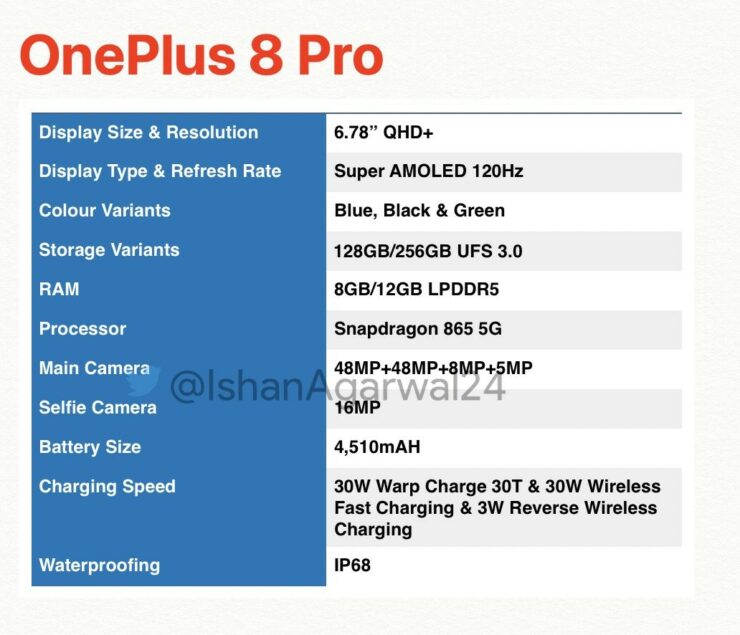 You are definitely getting the 120Hz screen on the OnePlus 8 Pro and you are also getting 8 and 12GB of RAM, the device includes ample storage as well. OnePlus 8 Pro will also include wireless fast charging as well as reverse wireless charging and obviously, the Warp Charging is making a return. Although the panel is a 120Hz, we are not sure if it is going to be on QHD+ or will be limited to FHD+. Whatever the case is, we will be hearing the official word pretty soon.

Moving on, you can look at the specifications of OnePlus 8 below. 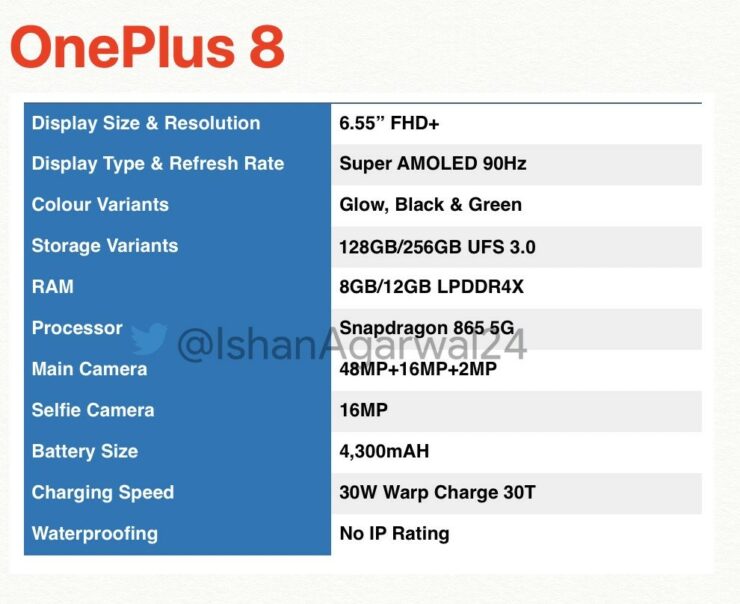 Compared to the OnePlus 8 Pro, the younger sibling almost looks like a device most people will be skipping. You are not getting most of the features like wireless charging. You are also getting a smaller camera setup, the storage option remains the same, but you are giving away the 120Hz screen and getting a 90Hz FHD+ panel, which is not that bad. The OnePlus 8 looks a lot like a OnePlus 7T with some changes here and there but overall spec-sheet is a lot similar.

Additionally, we also have press renders for both devices that you can check below.

Needless to say, at this point, the devices are more or less official. All we have to wait for is the official announcement now.