Only a couple of days are left until OnePlus launches its next flagship smartphone. The OnePlus 5 is a regular feature of the rumor mill. We've seen a lot of details surface related to the device, and today, another comprehensive leak has surfaced. Take a look below to find out more.

Today, we've managed to score a very diverse OnePlus 5 leak. It lists down nearly every specification for the device which ordinary users will be interested in. The Chinese manufacturer likes to brand its smartphones as 'flagship killers', promising to equip them with all the specifications and features which you'd find on a high-end smartphone. Courtesy of all the leaks so far looks like this year's OnePlus 5 will not be any different.

This information is similar to what we've seen surface in the past as well. The smartphone will be powered by the Snapdragon 835, coupled with 6GB RAM for the basic, 64GB storage variant. It, however, will not be the only storage option that you'll get with the OnePlus 5. A 128GBB version will be powered by 8GB of RAM, which, it's safe to assume will suffice the needs of even the most demanding users. 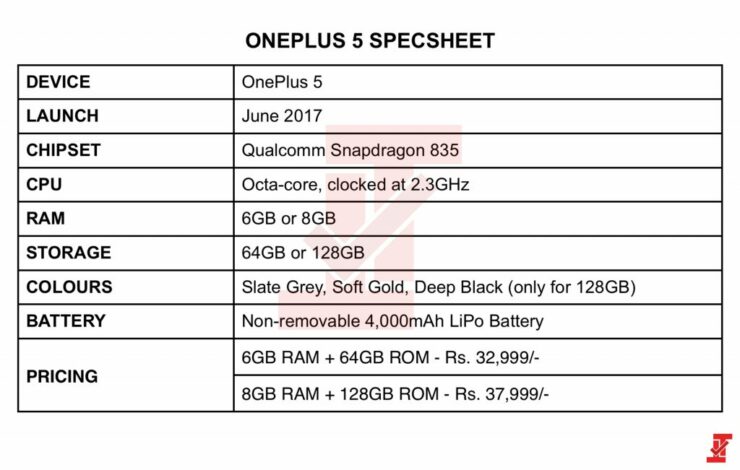 An interesting detail for the OnePlus 5 which has surfaced today concerns its color options. While both the 64 and 128GB smartphones will be available in Slate Grey and Soft Gold color options, OnePlus will reserve a special color for the 128GB device. Deep Black, exclusive for the larger OnePlus, sounds a lot like the Gunmetal black for the OnePlus 3T. It's a nice attempt to differentiate the smartphone, one which appears to be quite bland in terms of aesthetics according to leaked renders and images.

Qualcomm Could Be Struggling to Make Enough Snapdragon 888 Chips