InFamous Second Son is one of those few next-gen games that are still,even after months of their release, spitting astonishing new things. Sucker Punch Productions' open world action-adventure video game is still making the front page of several important gaming websites and communities as all its gameplay experience is nothing but wonders.

One of the great things about Sony's next-gen PlayStation 4 exclusive is that it is set in a real-world city that has been recreated for the game by Sucker Punch Productions. The developer undoubtedly chose a beautiful city for the game i.e. the City of Seattle that is located in the United States. The developer's hard work that went into creating this game is clearly visible all across the in-game city.

Several inFamous Second Son Screenshot comparison showing in-game and real-life sceneries have been shared since the release of the game. Every comparison took it to its own side of Seattle but what they all have in common is that in-game screenshots look as close to real-life screenshots as it can be. If only the lightning at both sides would have matched, there would have been a very slight difference in the reality and fiction.

In the game: A cool little detail is that every Sonic Boom store in the game has the same street number - 2209 - a homage to the real life record shop. Look out for several Sonic Boom stores across the city.

In real life: We begin our tour north of the city, over the bridge to the Ballard area. You can find Sonic Boom Records on NW Market Street and 22nd Avenue NW.

In the game: The Department of Unified Protection have taken over the Space Needle and have begun using it as their communications hub. In an early mission you'll get to climb to the top and wreak havoc.

In real life: Arguably the most iconic building in the whole of Seattle. Don't miss the restaurant at the top of the Space Needle for some truly astounding views. You can pretty much see the Space Needle from anywhere in the city, so finding it shouldn't be a problem.

In the game: Once you get to the second island, clamber up one of the skyscrapers near the river and breathe in the epic view of the Space Needle.

In real life: There are fantastic viewing points all across Seattle. For this particular one, grab a cab to West Highland Drive and ask for Kerry Park.

In the game: Adding to the feeling that the Seattle of inFAMOUS Second Son is a living, breathing metropolis - the monorail passes through the main station every couple of minutes in either direction.

In real life: The main terminal is right at the back of the Space Needle. Grabbing a ticket will get you into Downtown in around ten minutes, but then you'd miss out on the next two stops of our tour...

In the game: Find the car wash at night to see its dazzling sign in all its neon glory.

In real life: Head east along Denny Way from the Space Needle to find a massive intersection after a few blocks. You could actually buy the Blu-ray disc edition of inFAMOUS Second Son from the car wash when the game launched at the beginning of 2014.

In the game: Best seen at night, this massive building casts it's green neon light across the dark streets of Seattle.

In real life: Not quite as loud, but still very cool. The Crocodile has played host to iconic bands such as Nirvana, Pearl Jam, Cheap Trick, Mudhoney, R.E.M. and even Yoko Ono. You can find it on the corner of 2nd Avenue and Blanchard Street.

In the game: There are a few of these buildings across the city as you sprint across inFAMOUS Second Son, see which of them gives you the best shot when you switch over to photo mode.

In real life: Head south from the Downtown area to Yessler Way, you'll find this striking red brick building on the corner of James Street.

In the game: A bustling area of activity with a number of works of street art dotted around. Sucker Punch renamed it "Seattle Fish Market" in homage to the enigmatic fish stall workers who have become a tourist attraction in their own right.

In real life: You can find the world famous Pike Place Market at the end of Pike Street.

In the game: The gum wall has been lovingly recreated, albeit with a somewhat darker atmosphere. Look out for the neon "PORT ALLEY" sign, which the developers renamed for the game.

In real life: Possibly the most unhygienic tourist attraction in the world, every inch of the wall of the Market Theater is covered in chewing gum. Head down the steps from the fish stall in Pike Place Market to find it. See if you can spot the lovely marriage proposal some fine gentleman has spelt out in chewing gum.

In the game: Not that you ever need to use one - largely because you can dash around using the power of neon much faster than most vehicles, but look out for the taxi cabs with the satisfying green hue 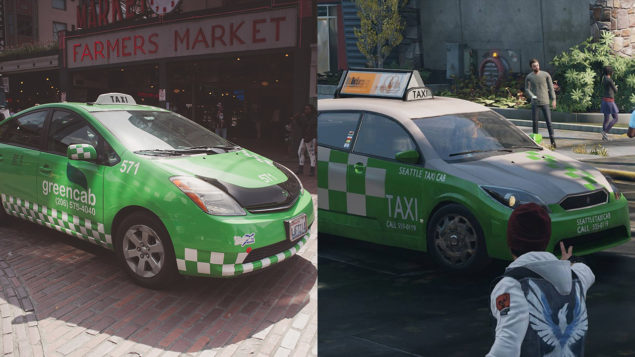 In real life: Green Cabs can be found much more easily in Bellevue, where developer Sucker Punch is based, however, you will see the occasional Green Cab looking for fares around Seattle.