Almost two years ago, the Chinese Wuxia-themed MMO game Justice from NetEase became the first title to use both NVIDIA RTX (ray-traced shadows, ray-traced reflections, and ray-traced caustic effects) and DLSS at once. Now, the developers of Justice have doubled down to become the world's first game to support NVIDIA's free RTXGI SDK.

RTXGI (recently updated to version 1.1) is a technique for real-time ray-traced Global Illumination which, according to NVIDIA, can efficiently produce infinite bounce lighting, unlike most prior GI implementations.

Using real-time ray-traced global illumination (GI), the lights are quite literally turned on, with light now bouncing from surface to surface, illuminating environments as in the real world. Without the benefit of ray tracing, developers must manually fake lighting, or pre-bake GI during the creation of the game. And while the results can appear excellent given enough time, effort and GPU horsepower, they can’t hold a candle to RTXGI, which dynamically adjusts lighting in real-time as the time of day changes, as clouds occlude light, as storms darken the skies, and as lightning strikes.

Even given a fixed time of day, RTXGI delivers vastly superior sights and scenes, with lighting realistically bouncing and diffusing from surface to surface, with the specific properties of each affecting how and where light propagates.

Owners of the GeForce RTX 3000 Series graphics cards, based on NVIDIA's latest Ampere architecture, will also enjoy much better performance. For example, the RTX 3080 can handle roughly twice the amount of RTXGI samples compared to the RTX 2080 Super in the Unreal Engine 4 'NVIDIA Attic Scene' test. 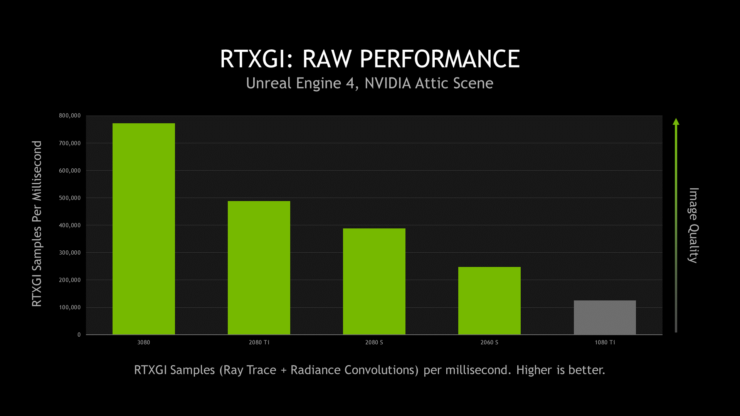 Latency is also vastly improved when using RTXGI with Ampere GPUs. An RTX 3080 pushes roughly thrice the amount of samples per frame compared to the 2080 Super, with up to 9.7 million RTXGI samples when running at 60 frames per second, while the Turing-based 2080S only manages up to 3.3 million samples. 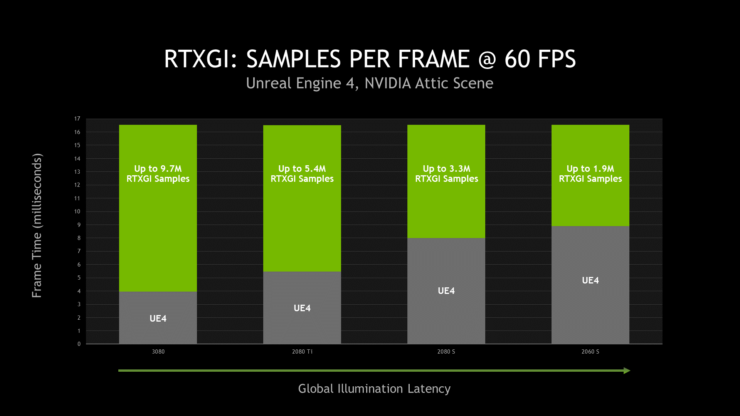 Below you can find some brief in-game footage showcasing the RTXGI implementation in Justice.