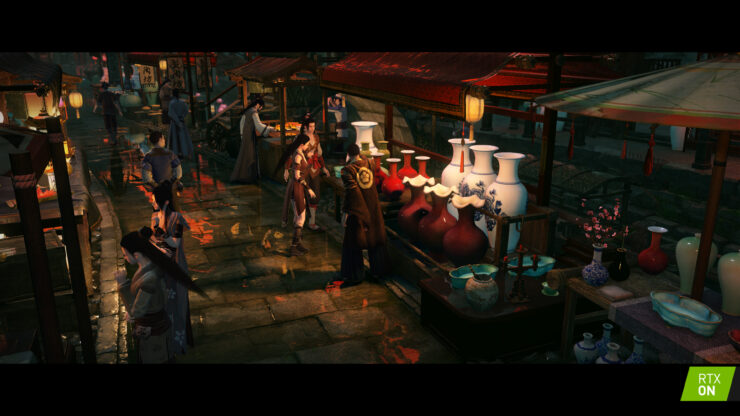 Justice, a Wuxia-themed MMO developed by NetEase and released this Summer in China, will be the first game to use both raytracing (NVIDIA RTX) and Deep Learning Super-Sampling (NVIDIA DLSS), thus exploiting the GeForce RTX graphics cards to their fullest potential.

NVIDIA CEO Jen-Hsun Huang announced this at the GTC China conference 2018. The company also shared a few images and a trailer showcasing Justice with both RTX and DLSS enabled.

And with NVIDIA RTX Ray-Traced Shadows, the limitations of traditional shadow map techniques will be overcome, enabling large complex interactions, real-time translucent shadowing, and the use of area light sources, leading to larger penumbras and physically correct contact hardening, allowing shadows to become sharper as they get closer to the object casting them.

Together, these and a plethora of other techniques enable the rendering of ray-traced shadows at a level of detail beyond that was possible or previously seen.

In addition, Justice is the first game in the world to feature real-time ray-traced caustic effects. As demonstrated by the interactive comparison below, caustics are light rays re-focused or scattered after hitting reflective or refractive surfaces, which in turn create a new light source that can illuminate the surroundings and cast shadows. This ensures that caustic effects react appropriately to objects, changing scenery and lighting conditions, and even wakes of boats.

And finally, to maximize performance, Deep Learning Super Sampling (DLSS) is employed at 4K and 25x14. It boosts performance by a significant degree, can improve image quality, and its anti-aliasing has better temporal stability and image clarity compared to commonly-used Temporal Anti-Aliasing (TAA) techniques.

In Justice, DLSS accelerates performance by up to 40%, giving GeForce RTX GPUs up to 90% faster performance compared to previous generation GeForce GPUs. And in terms of image quality, it can make detail clearer and sharper.

For the time being, NetEase did not hint at the game ever being released to Western countries. However, we'll let you know whether that changes in the future. Regardless of Justice, though, we hope to see more games implementing both features in the future so that neither the Tensor Cores nor the RT cores are sitting idle.