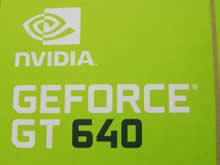 As the NDA from Nvidia nears it's end, another Kepler based GPU has started to surface across many retailers and shops world wide. In particular, a fews shops in Akihabara have gotten hold of the new models of the Kepler GK 107 based variant already.

The card is probably to be released at the Computex event that starts from tomorrow onwards and manufacturers namely Gigabyte, Gainward, Leadtek, MSI, Palit, Zotac, EVGA and other similar brands are expected to release the cards to the market.

Price wise the cards will  be available from $108 to $178 with the price variation depending upon the memory type as well as clocks/cooling solution used on the GPUs.