Some time ago, Nvidia filed a class action law suit against several companies for, eh, basically inventing the (modern 3D) GPU. While the basics of the claim make historical sense, the patent itself is something informally known as patent trolling. Samsung has now filed a counter suit against Nvidia but it looks like green was expecting the retaliatory attack and already had a defense prepared.

One of the claims in the Samsung counter attack is of False Advertising and that the Tegra K1 is not really the fastest SOC around. It is to this claim that Nvidia has happily conjured up a benchmark comparison; so conveniently in fact that I have a feeling that Samsung played right into their hands. The benchmarks pit the Exynos 5433 against the Tegra K1 in a multitude of benchmarks. Have a look yourself: 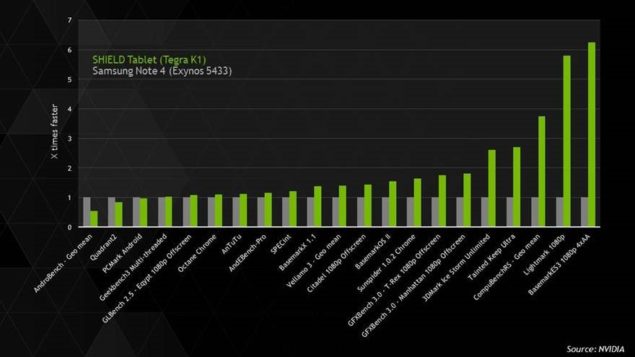 The patent lawsuit was filed two months ago against Samsung and Qualcomm and basically alleged that they have used GPU Technology invented by Nvidia without giving any proper compensation. The claim was filed to the International Trade Commission and Delaware District Court and it took Samsung exactly this time to come up with a counter attack. Samsung has hit Nvidia with 6 alleged patent infringements and also served a very small company called Velocity Micro with 8 alleged patent infringements in the same go.

While I am all for grabbing popcorn in titan clashes such as this, it is worrisome that small companies are getting caught amidst the collateral. Samsung did this for two primary small reasons: 1) Velocity Micro is a customer of Nvidia 2) serving Velocity Micro will make sure the case is heard in Virginia where the trial can be sped up. Velocity Micro is a relatively tiny OEM that can't really be expected to sustain the massive amount of capital required to fuel lawsuits. I am not really sure what to say about this new tactic, it is undeniably an underhanded trick to play but also Samsung's right if the claims are proven true. Lets just hope no one else gets caught in the crossfire and the giants leave the innocent bystanders out of this. Fledgling companies in Silicon Valley already have enough problems as it is.