Tripwire Interactive has released a beta build of Killing Floor 2 that supports PhysX FLEX Gore Effects. YouTube user  ‘r1cko’ has made available a video showcasing the newly implemented effects . r1'cko' is using an NVIDIA GTX 960 SC with 2GB of memory, giving him 40-60fps at 1080p in the Killing Floor 2 test map. 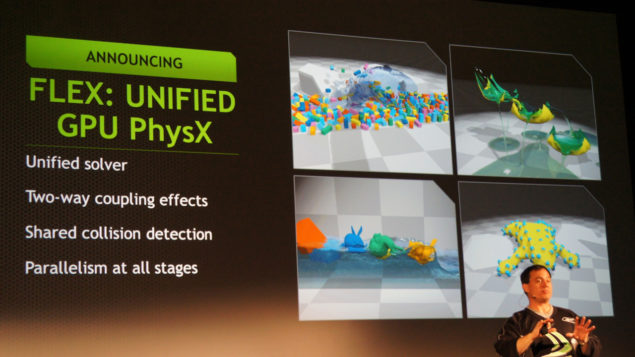 Visceral Gore - Killing Floor 2 ramps up the gore with a proprietary, high powered persistent blood system bringing new levels of fidelity to the genre. Players will send entrails, severed limbs, and blood flying as they wade through hordes of enemies. But they need to watch out! If caught, enemies will rip them, and their entire party limb from limb
6 player co-op or solo play— A multitude of varied playable characters await for players to choose from as they enter the fray in online co-op mode or solo mode for those willing to brave the horrific specimens alone
Terrifying Zeds - New enemies and fan favorites from the original game are back with expanded and smarter artificial intelligence, dishing out powerful attacks, working as a group to weaken the player’s party and pushing the challenge level and fear factor to new levels
Unique Blend Of Weaponry - From modern militaristic assault rifles, brutal improvised makeshift weapons, classic historical guns, and off the wall “Mad Scientist” weapons, Killing Floor 2 has a unique blend of killing tools that will satisfy any gamer
Expanded Perk System - Perks from the original game have been reimagined with more added to the fold. All perks now progress with meaningful talent choices that amplify different play styles, giving players a progression path that is expansive and full of rewarding milestones
Brutal Melee Combat - Killing Floor 2 reinvents melee combat completely. Players now have control over the type of melee attacks they can perform, enabling them to deliver bone-breaking crippling attacks to Zeds.

The game is currently set to release on the PC and PlayStation 4. GamingBolt recently got the chance to speak to Alan Wilson, VP of Tripwire Interactive, the developers behind the game.

Alan confirmed that they are targeting 1080p and 60 frames per second on the PS4, and explains that they already have the game running on a broad spectrum of PC hardware.

“Its a TARGET. Will we achieve it? Don’t know – but we’ve already got the game running on a pretty broad spectrum of hardware on the PC,” he said.

An Xbox One version might come in the future, but he does mention that Sony were far easier to work with, and that is why the PS4 is getting the game first.

“Oh, it most likely will. Just that Sony were far easier to work with, had been on the ball for a long time, helping us along. And Microsoft didn’t. So it goes to PS4 first (and exclusively).”

We will bring you any new information on Killing Floor 2 as soon as it becomes available.