When NVIDIA introduced their latest Maxwell based GeForce 900 series cards, they showcased a demo of the Apollo 11 moon landing which occurred back in 1969. The demo was used for two purposes, one to showcase NVIDIA's latest Gameworks technology codenamed VXGI, in short for Voxel Global Illumination and second, to debunk conspiracy theories that the Apollo 11 landing never happened. 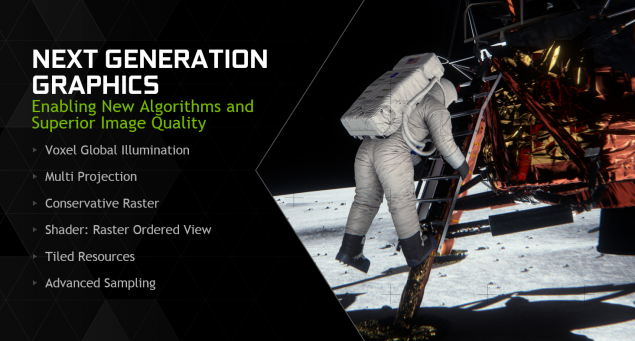 With proper lightning sources and using global illumination technology delivered by NVIDIA's Maxwell core features, they recreated and solved the mystery regarding the Apollo 11 mission. Currently, developers use pre-backed global illumination effects in their scenes placing several light sources in a particular place which is a burden for developers and at the same time, it gives off a non-dynamic presentation. This is solved with the use of real-time global illumination which is more realistic and offers a more dynamic experience to gamers. Here's a quick summing up of the tech directly by NVIDIA, you can learn more about it in our own Maxwell review. You can find the download link for the demo in the following link:

In the real world, all objects are lit by a combination of direct light (photons that travel directly from a light source to illuminate an object) and indirect light (photons that travel from the light source, hit one object and bounce off of it and then hit a second object, thus indirectly illuminating that object). “Global illumination” (GI) is a term for lighting systems that model this effect. Without indirect lighting, scenes can look harsh and artificial. However, while light received directly is fairly simple to compute, indirect lighting computations are highly complex and computationally heavy.

Because it’s a computationally expensive lighting technique (particularly in highly detailed scenes), GI has been primarily used to render complex CG scenes in movies using offline GPU rendering farms. While some forms of GI have been used in many of today’s most popular games, their implementations have relied on pre-computed lighting. These “prebaked” techniques are used for performance reasons; however, they require additional artwork, as the desired lighting effects must be computed beforehand. Because prebaked lighting is not dynamic, it’s often difficult or impossible to update the indirect light sources when in-game changes occur; say for instance an additional light source is added or something in the scene moves or is destroyed. Prebaked indirect lighting models the static objects of the scene, but doesn’t properly apply to the animated characters or moving objects.

In 2011, NVIDIA engineers developed and demonstrated an innovative new approach to computing a fast, approximate form of global illumination dynamically in real time on the GPU. This new GI technology uses a voxel grid to store scene and lighting information, and a novel voxel cone tracing process to gather indirect lighting from the voxel grid. NVIDIA’s Cyril Crassin describes the technique in his paper on the topic and a video from GTC 2012 is available here. Epic’s ‘Elemental’ Unreal Engine 4 tech demo from 2012 used a similar technique. Since that time, NVIDIA has been working on the next generation of this technology—VXGI—that combines new software algorithms and special hardware acceleration in the Maxwell architecture. by NVIDIA GeForce

With that summed up, let's talk about the demo. The Apollo 11 demo is 470 MB in size and works only with Maxwell GeForce 900 series graphics cards so you'll have to own a GeForce GTX 970 or GeForce GTX 980 to solve the mystery regarding the Apollo 11 mission yourself. You can find the download link in the description below: