NVIDIA would be launching its first desktop based Kepler GPU this month, the new GPU would be based on the 28nm GK104 chip which be utilized by the Performance Tier GPU’s. This includes the GeForce GTX 670Ti or GTX 680 GPU which as suggested is successor to the Fermi based GF-114/GF-104 Core.

Nvidia would use the GeForce 600 Series branding scheme and a new GeForce Logo for its Kepler based parts, however the name of the GK104 card is currently not confirmed. Fudzilla reports in their latest article that the GeForce GTX 670Ti name was used by NVIDIA internally and a few suppliers picked up the name due to which it has become widely spread and even showcased on few leaked pics, the new GPU would be called GTX 680. This does not mean that we will never see a GTX 670, We may but only by the end of April 2012. 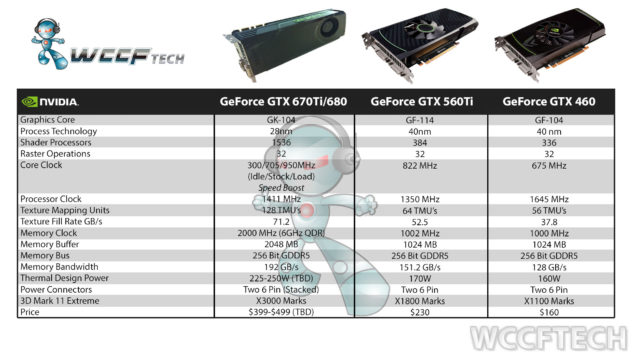 *TBD (To Be Determined)
*You can view the full size version of the chart by a simple click!

Coming to the specifications of the GK104 chip, as detailed by us earlier the chip features 1536 Stream Processors (Could vary on the 670Ti if it’s a different card). The Stream Processors should not be compared to the Fermi Cuda Cores – They are 3x the amount of Fermi’s flagship GPU but are weaker split into 4 GPC. The Die Size of the entire chip is around 40mm * 40mm, Core (die) size is about 17.2mm * 17.2mm, The core area is about 300mm 2. The GPU Core was said to rule out the use of Hot Clocking however latest information show that the Kepler Architecture still use Hot Clocks which allows the Processors/Shaders clock frequency to be manually adjusted.

The card is confirmed to feature a 2GB GDDR5 Memory which runs across a 256-bit wide memory interface. This was also confirmed by the leaked pictures of the PCB which showed the use of 8 Memory chips totaling around 256-bit memory. Memory runs at 2000 MHz (6 GHz Effective Quad Data Rate) with a total bandwidth of 192GB/s.

Thermal Design Power is suggested around 225W-250W which would be provided through two 6 Pin connectors stacked on top of each other (Seen in the leaked Pictures here). There’s an additional room for an 8 Pin connector and a 6 Pin connector right next to the stacked slot, what that would be used for is unknown.

Display connectors on the card consist of 2 DVI-D, 1x HDMI and a Full length Display port, 3D Stereoscopic is possible through a single card, Also a maximum of four cards could be SLI’d together for enthusiasts looking forward to Quad-Way setups. The GTX 560Ti and GTX 460 only allowed Two Way SLI so it’s good to see this addition on the GK104 part.

Cooling of the GPU consists of a large vapor chamber which dissipates heat to a Aluminum Fin array Block which is cooled down by a large blower fan which ventilates heat to the interiors of the GPU shroud and throws the hot air outside of the Exhaust panel at the rear. The Vapor chamber covers most of the PCB area which include the Core/Memory and VRM phase.

Finally, the price of the Kepler GK104 is suggested around $399-$449 by various Taiwanese AIB partners however due to the current issue with TSMC who have stopped the production of 28nm chips, It’s expected to raise as much as $499-$549 so it’s pretty unclear what the final price would be.

As far as performance is concerned, we don’t have actual numbers except a few figures from different tech sites. A few have reported that the card is around 10% faster than the HD7970 and in some cases could be 5% slower than the card.

At the end, it all comes to the price of the GK104 product. If it retails around $399 - $449 mark then it would prove well for Nvidia otherwise it would be up to you to decide whether you want to go with the Red Team (Hint - HD7950) or Green Team. The card launches during March 22nd - March 23rd.