Nvidia has revealed a new Anti Aliasing method for their 900 series GPUs. The technique is called MFAA and offers the quality of MSAA at the cost of roughly half the performance hit. It stands for Mixed Frame Anti Aliasing and will be available for everyone to use (Maxwell owners) after the 344.75 WHQL Drivers. 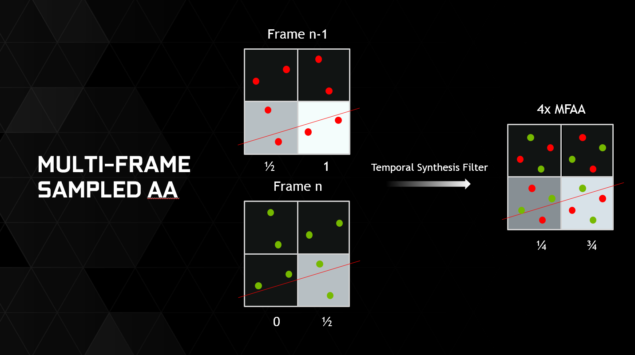 MFAA, which should have been called MFSAA by the way, is another form of sub pixel interpolation developed by Nvidia and is exclusive to Maxwell GPUs. There are tons of AA techniques out there, some better than the rest, and this one seems to be a good technique to become the new favorite of MSAA users. Since you are basically getting the results of MSAA at half the cost, Maxwell users could benefit immensely from this. Nvidia mentions that this technique could be used in conjunction with DSR but in my opinion that is pretty stupid. DSR would already act as a perfectly reasonable jaggies removal technique, considering it renders the original image at 4K. Applying an AA technique  over an already downscaled image is quite redundant.

With the launch of Maxwell we are introducing the world to Multi-Frame Sampled Anti-Aliasing (MFAA). This new, Maxwell-exclusive anti-aliasing technique improves upon the quality of MSAA, whilst simultaneously reducing the performance impact, enabling gamers to crank up rendering resolutions and game detail, and to activate DSR.

Previous-generation GPUs include fixed sample patterns for anti-aliasing (AA) that are stored in Read Only Memory (ROM). When gamers selected 2x or 4x MSAA for example, the pre-stored sample patterns were used. With Maxwell, we have introduced programmable sample positions for rasterization that are stored on Random Access Memory (RAM), creating opportunities for new, more flexible, more inventive AA techniques that uniquely address the challenges of modern game engines, such as the increased performance cost of high-quality anti-aliasing. By alternating AA sample patterns both temporally and spatially, 4xMFAA has the performance cost of 2xMSAA, with anti-aliasing properties equivalent to 4xMSAA.

The driver also contains optimizations for Far Cry 4, Dragon Age: Inquisition, The Crew, and World of Warcraft: Warlords of Draenor. All in all, this is a must download for Nvidia users with or without Maxwell GPUs. The WHQL certification means the drivers are ready and will be less susceptible to bugs than any other beta release. The full change log can be found over here and the Geforce 344.75 driver can be downloaded from Nvidia official.